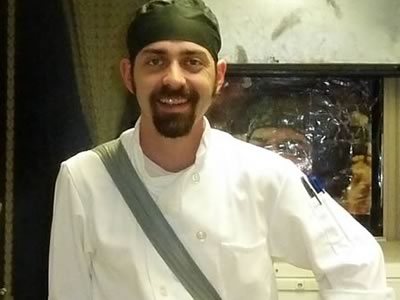 The Winner of the 2011 Reluctant Gourmet Culinary School Grant Is...

For the fourth year in a row I am excited to announce the newest recipient for The Reluctant Gourmet Culinary Grant in association with Chef4Students. This award is given out to a culinary student in need of financial assistance. The winner this year is Gregory Cerretani from Le Cordon Bleu College of Culinary Arts in Boston.

UPDATE: Be sure to read my interview with Greg Cerretani here.

For the 2010/2011 academic year, Chefs4Students.org received more than 950 applications from students at over 30 different culinary schools across the country and abroad. Eligible students attended a culinary school at the time of the award, showed proof of their financial need, provided letters of recommendation, transcripts and a 500-word essay.

Chef David Nelson, co-founder of Chef4Students and a panel consisting of several certified chefs, business professionals and culinary experts from a variety of organizations across the world carefully reviewed the applicants to pick their top candidates. I was then able to review those students and choose a student as the recipient of The Reluctant Gourmet culinary grant. This proved to be a hard task; many of the students had great background stories and well-written essays.

This year's winner, Gregory Cerretani, is a third generation of a large Italian family of grocers. With a love for food, Gregory decided to take up his dream of attending culinary school in his late 20's. With his wife's and family's support, Gregory enrolled in Le Cordon Bleu in Cambridge, MA and has been achieving success ever since. His high grade point average and new shift manager position at his restaurant job proves he is a hard working student with a true passion for the culinary industry.

Recently, Gregory was offered an externship in Italy to complete his culinary degree. For a culinary student interested in Italian-American cuisine with the hopes of opening his own restaurant, this opportunity would be invaluable to his career. As someone who knows first hand what it's like to come into their dream job later in life, The Reluctant Gourmet applauds Gregory for having the courage to go back to school and achieve these dreams.

I want to share with you a portion of Gregory's essay sent in with his application talking about his opportunity to study abroad in Italy:

"I have recently been presented with the opportunity to complete the final requirements of my culinary degree cooking in Italy, learning about the land, products, and recipes of my ancestral homeland for three months. Though my externship will only be three months' worth of experience in Italian cooking,

I feel that it is a priceless opportunity to exercise and hone my abilities in the cuisine, which will serve as the foundation for achieving my goals and satisfying my ambition to develop the skills and knowledge of authentic Italian food preparation and presentation. If awarded, the money from this grant would literally be the fulfillment of a dream I have had since childhood, even though it is one I have only recently had the confidence and support to pursue to the ultimate degree."

Rich in tradition, the Boston, MA campus of Le Cordon Bleu College of Culinary Arts is a relatively new campus, having opened in 2007. While the physical campus is new, the tradition behind the Le Cordon Bleu approach dates back to the 1500's, with the first school opening in Paris, France in 1895.

The Le Cordon Bleu institution, the world's largest hospitality education institution, is also known as comprising of one of the finest culinary programs available in the United States. Combining classic French techniques with new American technology, culinary students learn the skills and develop the confidence to be part of this every growing career. Students learn what it takes to be a chef, patisserie chef or hotel manager including the essential business concepts that are required today to be successful in this competitive market. Fans of Julia Child, Mario Batali, Simone Beck and others know they are some of the many notable Le Cordon Bleu alumni.
What's Next?

After reading Gregory's references required in the grant process, I can only say that he has a bright future to look forward to. Quoting Jessica Stacy, his coordinator of student services at Le Cordon Bleu Boston,

"Greg and I met very early in his educational career here as he wasn't afraid to dive into all the services the school had to offer him. He immediately immersed himself in the curriculum he was learning and it wasn't long before he was a force to be reckoned with in the kitchen, as well as in our community. Greg's natural characteristic is to lead by example. He has such a strong presence about him that allows his fellow students to feel supported and encouraged, but challenged at the same time.

As his peers and teachers began to see what he was capable of, Greg was elected into our Student Government Association becoming a vital member of what makes this community tick. Greg consistently went above and beyond his duties by assisting students with their concerns, being a voice to administration, volunteering for school related functions, implementing school wide programming and creating new culinary initiatives. Our Student Government is a better and more respected organization for having him be a part of it."

I'm hoping to interview Gregory in the near future and ask him about his culinary school experiences and more about his externship in Italy. I am incredibly honored to be able to help students like Gregory in achieving their dreams. If anyone is interested in getting involved with Chef4Students grant program, please contact me or Chef Nelson at the Chef4Students.org website.