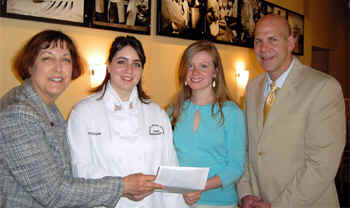 "Be prepared to put in hard work and long hours. " - Crystal Frazier

I met Crystal through my friend Chef David Nelson of Chefs4Students.org. Crystal received one of Chef4Students grants helping her finance her culinary education in New York at the French Culinary Institute (now called The International Culinary Center).

Chef Frazier is now living in Salt Lake City working at the Log Haven Restaurant, one of my favorite restaurants when I lived in Park City. Eventually, she would like to open a bakery using the finest ingredients and techniques.

All of my sibling helped my mom cook our family dinners; taquitos, black beans, salsa, enchiladas.  When I got a little bit older I remember sitting on the kitchen counter helping my older sister pour the ingredients into the mixer than was creating delicious breads, cakes, and cookies.

How did you decide the french culinary institute was the right culinary school for you?

I did tons of research.  I didn't want to rush into making a decision that might not be right for me.  I narrowed down the choices by deciding what was important to me.  For me, a respected pastry program was top priority.  Second was location ...I wanted the chance to work at the top restaurants while I was in school.  And third was the cost.

Can you tell us a little bit about your involvement with Chef4Students and how they helped you go to culinary school?

Before attending culinary school, my sister helped me do an extensive amount of research on culinary grants.  We searched books, web sites, and contacts.  We first found out about the Chef4Students (called Chef2Chef when I researched them) while doing our online search.  It was a great resource enabling me to talk to other future, present, and past culinary graduates.

I applied for a grant and later received one.  After graduating, I was on my way from New York back home to Utah when a Chefs4Students fundraiser was happening.  We swung by Chimney Park Bistro having no idea what to expect.  It turned out to be one of the most fun food events I have ever attended.  Ever since that first event, I knew I would be returning year after year.

Training was very intensive.  We received much of our lectures while we were prepping, mixing and baking.  Much was taught in that short amount of time.  While I was going to school, I was working at a top restaurant which made my schedule hectic but I learned how to manage by time which is a huge aspect to be successful in the culinary industry.

How difficult did you find it?

Having previous bakery knowledge relieved some of the pressure of learning the basic baking principles, which aided me in focusing on technique and creativity.  Being able to push beyond the basics helped me to learn at a comfortable speed.

What was most enjoyable about going to culinary school?

Getting to meet new people including the amazing instructors, learning new techniques, and learning in one of the top culinary cities.

What was most unmemorable about going to culinary school?

I loved all aspects of school but I would have to say having classmates that didn't share the same passion I had about cooking and baking.  I feel that if you are going to school, you should put everything you have into it and not just go through the motions.

What advise would you give someone interested in culinary school before making that commitment?

Research!  Go to the school and watch a couple of classes, talk to the instructors, take a tour of what they have to offer.  Also, work in the industry for a year or more to understand what you are getting into.

What questions should they be asking themselves?

Can I learn something at this school that I can't learn anywhere else?

How could they prepare themselves to be more successful before entering school?

The most important thing for me was to have that basic industry experience.  That allowed me to feel more comfortable in the kitchen and working with different ingredients.

What should they leave at the door?

The thought that they know what they are doing, even if they do.  Thinking that you already know things will limit your ability to learn more.

What does it take, in your opinion, to be successful as a culinary arts student?

A willingness to learn. Being prepared to put in hard work and long hours.  Always wanting to be better.

What characteristics does it take to be successful as a chef in today's market climate?

I think the same as a successful student.  Also being willing to start at the bottom and prove your way up.

Now that you are working in a restaurant, how does it compare to your
experiences at The French Culinary Institute?

I think much of what we learned in school translates into the restaurant industry.  Except it's even more intense and you are the only person that is driving you to be better.

Do you feel you were prepared?

I feel that I was very well prepared.  But school can only take you so far.  You have to want to constantly learn more.  Learning never ends.

What cookbooks would you recommend every home cook own?

On Food and Cooking - Harold McGee

What area of the kitchen are you working and what does it entail on a
daily basis?

I am currently the pastry chef which means I create and execute the dessert menu, I do inventory, costing, and ordering.  Anything that relates to pastries and bread, I do.

What mistake Did you made as a home cook that you don't make anymore as a professional?

One thing I do now that I didn't do at home was to measure everything by weight.  It is much more accurate making the results more consistent.

Thank you so much for participating and I hope you enjoyed the interview.