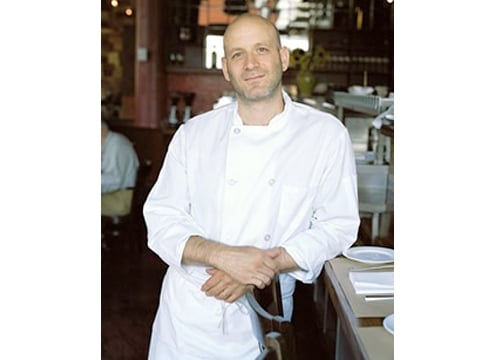 Once again I had the privilege to interview one of America’s Top Chefs and ask questions you don’t normally see in everyday interviews like “What advice you would give home cooks to take our cooking to the next level?” My most recent Novice2Pro chef interview was with Chef Marc Vetri, a local Philly guy who happens to be one of Food & Wine’s Ten Best Chefs and runs two of the most successful restaurants in Philadelphia, Vetri and Osteria.

I was given the opportunity to interview Marc by the folks marketing The Celebrity Chef Tour, an organization that showcases the talents of James Beard Award Winners by presenting them throughout the country to prepare award winning dinners to raise money to benefit the James Beard Foundation. For those of you who don’t much about the James Beard Foundation, its mission is to “celebrate, preserve and nurture America’s culinary heritage and diversity in order to elevate the appreciation of our culinary excellence.”

The event menu will include Homemade Porchetta with Tuna Sauce, Sweet Onion Crepe with Parmesan Sauce, Homemade Rigatoni with Duck Sausage and Mustard Greens and Veal Breast Braised in Milk with Soft Polenta. The dessert will be Chocolate Polenta Souffle with Vanilla Gelato. Sounds like a great night.

You may remember a blog I posted back in November on Marc’s new cookbook, Il Viaggio di Veri, A Culinary Journey. It is a beautiful cookbook with incredible photography, wonderful stories about Marc’s experiences in Italy and 125 of his most requested recipes from his restaurants. I have not been this excited about a cookbook for a long time.

Chef Vetri and his partners are also involved in a charity that is near and dear to my heart, Alex’s Lemonade Foundation. It is called The Great Chefs Event where Marc invites a bunch of his chef friends from all over the country to come to Philadelphia with staff to prepare tastings for those of us attending the event.

This year I am proud to be a sponsor and will be bringing a bunch of my friends to attend with me. Here is the list of Chef Vetri’s chef friends who will be there this year:

Tickets are expensive. I think they are $250 a piece, but it is for an incredible cause, finding a cure to childhood cancer.

If you want to learn more about the event, I recommend you go to Alex’s Lemonade Stand where you can read Alex’s story and learn how to order tickets.