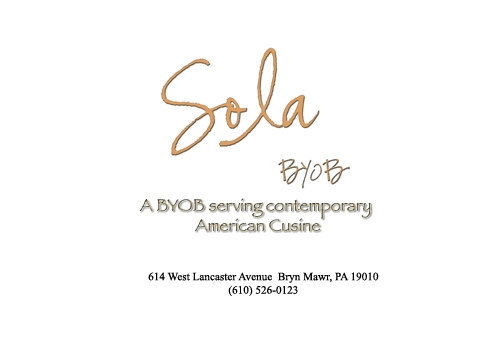 My Dinner at Sola's on the Mainline

Friday night our neighbor offered to watch our two young daughters so my wife and I could go out for an impromptu dinner. I said yes before she could even finish her offer. We decided to try a new (new to us) restaurant called Sola in Bryn Mawr, a suburb of Philadelphia and near where we live. This blog entry is to pay tribute to one fine meal.

Spezia was the previous establishment at this location but Chef/owner (David Clouser) did a great job redecorating the space giving it a much more comfortable feel. The lighting is better and the overall feel of the room seems better.

Another reason we chose Sola; it is a BYOB restaurant and since I collect wines, it's great to go out to dinner with a wine I've been holding a few years waiting for the right occasion to uncork it.

Sola's serves modern-American cuisine and are serving using local farm fresh ingredients this time of year. Much of his menu and specials featured fresh seasonal produce and cheeses.

What We Were Served

After they opened our bottle of 1999 Chateau Meyney, our waitress brought us the "teaser," or tasting, to stimulate our appetite. She called it some fancy French name that I can't remember but it was a small slice of fig, topped with a small piece of Maytag Blue cheese and finished with a few drops of what I think was Pomegranate molasses. There was a lot of flavor packed into that little bite.

We then shared an Heirloom tomato salad with three or four different types of  tomatoes with one of them being sliced and fried.

For entrees my wife had Steak Frite served with asparagus and fingerling potatoes that were halved, fried and built into what we called a "little log cabin". The sauce was demi-glace based and had a tartness flavor to it I could not figure out from what.

I ordered braised short ribs that were incredible. They started with a mound of sautéed spinach in the center of the plate, placed mashed potato around the spinach, a rich veal demi glace sauce around the potatoes and the braised short rib on top of the spinach. It looked great and was one of the best meals I've had in a restaurant in a long time.

For dessert we shared warm, liquid filled chocolate cake that was rich and tasty.

On the way out I just had to take a peek in the kitchen and say hello to the chef. He stopped what he was doing, came over and introduced himself and appreciated my comments.  You could see he was proud of the food he was putting out.

All in all, a great night out with my wife on short notice.