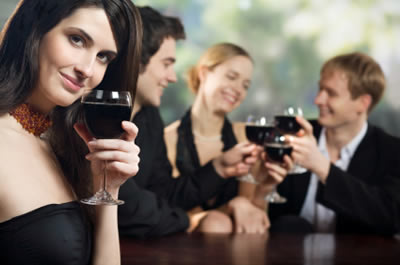 The other day I was having a conversation with my neighbor Bill. Bill is an extremely good-natured and caring person. But he is also honest and straight-forward; a no BS kind of guy who holds no inhibitions about proclaiming the emperor isn't wearing any clothes.  He'll tell you like it is.

In this nauseatingly, politically correct world where much communication is euphemized, or packaged in sensitivity-side-stepping disingenuous, Bill's candor is refreshing.  We were discussing the trappings of the working world, particularly the suffocating level of tact and diplomacy required to survive inter-personally these days.  Bill stated: "Do you know what etiquette is?"  "What?" I queried.  "It's not stating the obvious."  I chuckled with empathic resonance.

I'll bet some of you thought when you read the title of this article that it was going to be some hoity-toity, snobby list of rules for consuming wine.  No Sir.  I am fully embracing Bill's definition of etiquette and applying it to wine.  Only I'm going to be "anti-etiquette" and state the obvious.

What is this "obviousness" about wine that certain people don't want to hear or deny?  It's this:  Alcohol is a key factor in wine consumption.  Crash!  I can hear the Riedel crystal goblets falling to the floor as outraged connoisseurs become incensed at my suggestion that alcohol influences their appreciation of their beloved elixir.  How boorish of me to cheapen their sophisticated epicureanism by suggesting it embraces some primitive strivings.

The oenophile would argue that wine, especially fine wine, is not an alcohol transmission device or a refreshment to be quaffed uncouthly in response to thirst or base impulses.  On the simplest level, wine is about food and is therefore an inextricable component to all that food represents.

But wine is even more than the gustatory pleasure of uniting a painstakingly refined product with exquisite food.  Wine is an icon of our culture and a symbol of our traditions. Its sociocultural roots are imbedded in our theology, our celebrations of life, and our respect for the land.  Wine is transcendent and its study and appreciation are an urbane and profound endeavor.

I heartily agree with those sentiments but I don't think that's the whole story.  First of all, if alcohol were removed from wine, it wouldn't be wine.  It would taste radically different.  Alcohol is one of the primary constituents of wine, which in conjunction with tannins, fruit, and acidity form the wine's structure.

One of the hallmarks of a superior wine is the harmonious marriage of these elements.  Remove any of them from the mix and the wine would become a truncated shadow of its former self.  Thus, at the most basic level, alcohol is necessary for the wine's gustatory appeal.

But c'mon folks, let's really call a spade a spade.  Part of the allure of any alcoholic beverage is the alcohol, or more specifically, the pleasing effects that alcohol has on our brain.  Why do millions of people, casual imbibers and connoisseurs alike, come home and relax with a glass of wine as opposed to a cola?  Because cola contains caffeine, a central nervous system stimulant while alcohol is a central nervous system depressant.

"Depressant" in this context refers not to emotional depression, but rather the mollification of the central nervous system.  In plain English it soothes our nerves.  Now I'm not talking about drinking to the point of inebriation.  One needn't reach a staggering blood alcohol level, (BAL), to reap some of the consequences of alcohol.    Even small amounts of alcohol can exert a degree of tranquilization.

Of course as BAL rises this potentiates into a feeling of euphoria, and ironically, at even higher BAL's the whole scenario can backfire.  At very elevated BALs alcohol disinhibits the brain, so much so that primordial urges are released.  We all know people who are angry, violent, maudlin, depressed, or even suicidal drunks.

But again, I'm not referring to intoxication when I assert that alcohol is a noteworthy motivational agent in wine consumption.  I'm simply stating that even mild alcohol ingestion engenders a gratifying psycho-physiological state, and this is indelibly woven into even the aficionado's appreciation of it.

In addition to its relaxing properties, alcohol is the ultimate social lubricant.  It reduces the anxieties we all feel when having to interact in mixed company.  This is the cornerstone of the "cocktail hour" before dinner.  It's no great revelation that a few drinks can pave the way for a first date, a tense business meeting, dinner with the in-laws, or the insufferable ordeal of incessant, inane conversations at a large cocktail party or social gathering.

Not that I think any of this is shameful. I see no ignominy in the prudent use of libation to ease one's nerves or grease the wheels of social machinery.  My argument is that anyone who thinks they drink wine solely for the lofty purposes previously described is kidding himself.

Personal or social sedation may not be the purposeful, primary or conscious goal, and I'm sure the more serious the gourmand, the more the gastronomic pleasure of the wine is sought.  But you can't have one without the other.  The psycho-physiological effects of the alcohol in wine are indissociable from its gustatory pleasure, and these effects can easily have an insidious and unconscious impact on our incentives to drink it.

Clearly there are gourmets who are unabashed about admitting to the extraneous enticements of wine.  But, there are also those who are oblivious to the sway that alcohol may possess.  Others may recognize it but feel compunction about acknowledging it due to social mores or the dictates of a harsh conscience.

Either way, the scintilla of wine enjoyment that emanates from the alcohol is repressed or denied under a shroud of connoisseurship.  And while connoisseurship may be the overwhelming basis for one's love of wine, an iota of that orientation remains nothing more than an ostensible justification for the secondary benefits of alcohol.  There's no better way to conceal ulterior motives than to enshrine them in truth.

So I say we dispense with the self-delusion and the semi-veil of gastronomic sophistication which obscures our normal, instinctual longings.  Abandon any shred of pretense and be true to our inner selves.  Yes, fine wine is absolutely pleasurable in its own right and its pursuit reflective of our refinement, our intellect, and our heritage.  But we are still human, and hence eternally corporeal and emotional.

There's no loss of dignity in conceding the role our biology, impulses, stressors, and anxieties play in our functioning and our choices.  To state the obvious, that's human nature even if it may not be etiquette.

« Spices - Grinding Your Own
Molecular Gastronomy and Culinary Schools »