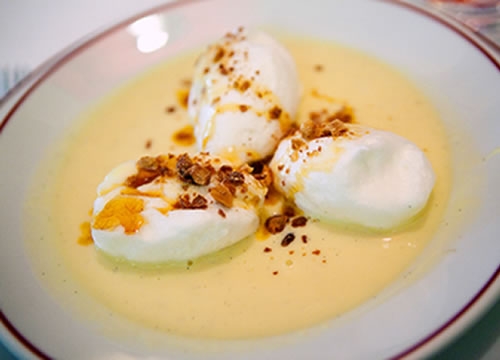 What the heck is Eggs a la Neige?

Here's contributing writer Chef Mark Vogel's article and recipe for "Eggs a la Neige." This may be a bit more advanced for the beginner cook but if you are into classic French recipes, you'll really enjoy it. Personally, I'm not a huge fan of meringue and to be honest, don't think I've ever prepared it at home but I know there are lots of you who enjoy it.

On the other hand, I am a huge fan of Crème anglaiseiand glad to have Mark describe in such full detail how he makes it . If you give it a go, please be sure to let me know how it turns out. - RG

Eggs a la neige is a traditional French dessert created by the marriage of two classic culinary concoctions:  crème anglaise and meringue.

What is Crème Anglaise?

Crème anglaiseis a type of custard.  A custard is a mixture of eggs and milk and/or cream that can be hot or cold, sweet or savory.

Most custards are desserts such as crème brulee, flan, and cheesecake. Quiche however, is a savory custard.

Custards can also be a liquid or more gelatinous.  The latter are fabricated by the addition of starch, such as cornstarch; the quintessential example being pastry crème.  Pastry crème is used in confections such as Napoleons, cream puffs, éclairs and cream pies.

Crème anglaise on the other hand, does not contain starch and is thus more fluid.  It is often employed as a sauce and poured over items like cake or fruit.

Meringue is a beaten mixture of egg whites and sugar.  Other flavoring agents can be added as well.  Meringue is routinely baked but can also be poached, as we shall see in eggs a la neige. It can be cooked to varying degrees of firmness.

A pliable meringue is used as a topping for innumerable desserts such as lemon meringue pie or baked Alaska.  Alternatively, meringue can be shaped into "cookies" of infinite configurations and baked until completely firm.

To make eggs a la neige, dollops of the meringue are poached in water or milk, cooled, and then rested in a pool of chilled crème anglaise.

Eggs a la neige is also known as eggs in snow, snow eggs, or floating islands. Neige means "snow" in French, hence the snowy monikers. But it is also reputed that the famous French chef Georges Auguste Escoffier (1846-1935), named the dish after Gabrielle-Charlotte Reju, (1856-1920), a French actress whose stage name was Gabrielle Réjane.

Whether Escoffier actually invented the dish is a little unclear. Its components, custard and meringue, were well established before Escoffier's time.

Some sources credit him for their union and others claim he merely named the dish. Nevertheless, I remain confused as to how the word "neige" relates to the name of the actress.

Things become even murkier with the name "floating islands."

One thing is clear:  while eggs a la neige is sometimes referred to as floating islands, technically floating islands is a different recipe. What's the difference? Depends on who you ask.  (Don't you hate that answer?)

An 18th century recipe calls for French rolls with jam or jelly to be floating in the crème. Larousse Gastronomique sites the use of sponge cake or brioche.  According to another culinary text, the "islands" are composed of alcohol-soaked dessert biscuits and jam.

If there's any consensus at all, many modern floating island recipes bake a large piece of meringue, (as opposed to poaching individual pieces), and "float" that in the crème.

And to make matters worse, be it eggs a la neige or floating islands, many European countries have their own incarnation of the dish. OK, enough of the magical mystery tour.  Let's get back to the point of the discussion, i.e., eggs a la neige, and review how to make custard and meringue.

The primary challenge when making crème anglaise, or any custard for that matter, is cooking but not scrambling the eggs. A little too much heat and you’re having breakfast instead of dessert. In a nutshell, (even though it’s more like in a mine field), egg yolks and sugar are whipped together and then cooked with milk or cream and flavored with vanilla. The critical elements here are:

The yolks and sugar are whipped until “ribbons” form in the mixture.

The milk/cream is heated separately at first. Do NOT boil the milk. Bring it only to a gentle simmer. If using a vanilla bean, scrape out the seeds and add it to the milk. If using vanilla extract add it at the very end. 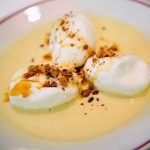 Eggs a la Neige Otherwise Known as Eggs In Snow

For the Crème Anglaise

How to Make Crème Anglaise

How to Make Meringue

Make the Eggs a la Neige

On a final note, eggs a la neige can be augmented in many different ways.  All kinds of flavorings and garnishes can be added including cloves, allspice, cardamom, cinnamon, caramel, liqueurs and chocolate.  Various nuts can be sprinkled over it.  There are even tropical versions that employ ginger, coconut and tropical fruit.
« Scrambled Eggs, Queso Frito and Spanish Potatoes
What is on a Restaurant Management Course List »