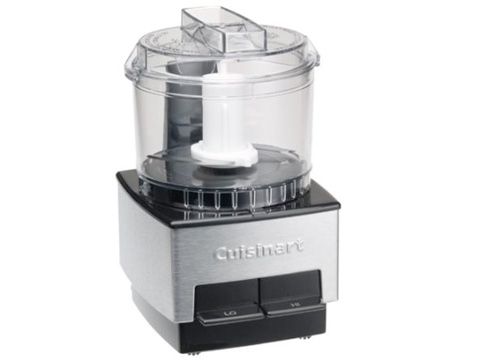 Go for a Spin

The food processor is a versatile and expedient device that can be found in almost any serious cook's kitchen, and indisputably in every professional one.  It's one of those gadgets that make us wonder how we ever fared without them.

And while they seem so indispensable and workaday, in actuality they've only been in American households since the 1970's.  Invented by a Frenchman, they first came into commercial use in 1960.  But they weren't introduced to the North American domestic market until 1973.

We all know the old cliché:  "They can put a man on the moon but they can't"  Well, it does seem kind of weird that man was capable of walking on the moon before American home cooks were whizzing their onions electronically.

When choosing a food processor, as with most products, it's worth the additional money to procure high quality.  Superior food processors are heavier, sturdier, have stronger, more reliable motors, and sharper blades forged from better steel.  Pricier models usually offer an array of blades to allow a greater range of cutting/chopping sizes.

Some also come with a mini bowl which can be inserted into the larger one, along with a diminutive blade for performing small tasks.  This latter feature is very handy.  In fact, if your food processor does not come with an insertable, bantam sidekick, I strongly recommend you acquire a separate mini processor.

Quite simply, a small bowl and blade will process limited quantities more proficiently.  Mini processors are especially good for grinding a meager amount of spices or producing a few servings of a salad dressing.

While most people appreciate the time and labor that food processors save, they do have their limitations.  First, they don't handle liquids as well as solid or semi-solid concoctions.  The more fluid the medium, the better off you are with a blender.

Second, they don't always process uniformly.  Sometimes part of the food is finely minced while sections further from the blade exhibit larger pieces.  This can be mitigated by not overfilling the processor, intermittently pulsing it as opposed to continuous motion, and scraping down the sides between pulses.

"Pulsing" the food refers to a mechanism on virtually all food processors whereby you can briefly spin the blade by holding down a spring loaded button that disengages upon release.  This is in contrast to the standard buttons that when engaged create constant operation.

Based on the target dish however, the inconsistency of the food may not be an issue.  For example, if you were chopping items for a soup that will eventually be pureed, some variation in size is academic.  However, if your food preparation requires a higher degree of perfection or aesthetic uniformity, then cutting everything by hand is the only way to go.

Finally, food processors have a tendency to pulverize items.  Food can be rendered somewhat mushy as opposed to a chef's knife which can create finely minced pieces that maintain their structural integrity, albeit at the expense of more time and labor.  The pulverization factor can be alleviated somewhat by again, intermittent pulses.

Should I Process or Cut By Hand?

Of course, depending on the recipe in question, homogenizing the ingredients might be the goal, such as when making a mousse.  On the other hand, overworking certain ingredients can alter their taste.

Case in point:  there is a distinct difference in taste, (and texture), in salsa made in a food processor vs. salsa produced by chopping every ingredient by hand.

Another poignant example is fresh herbs such as cilantro, parsley, or basil.  Their "processed" counterparts can't compare with the hand cut. Onions, while OK to cut with the processor's slicing blade, tend to lose something when chopped with the regular blade.

The first and foremost use of a food processor is to chop and slice.  As stated, various blade attachments allow for different sized cuts.  There's usually blades that grate and shred as well which is extremely handy for grating and shredding cheese.  If you have a sizable amount of ingredients to fabricate and perfect uniformity is not an issue, nothing beats a food processor's primary function.

Place all the ingredients for the dressing except the oil in the processor first.  Attach the lid with an opening that allows for the pouring in of liquid.  Whiz the base ingredients first and then slowly pour in the oil in a steady stream until everything is emulsified.

This is so much better than using a dough cutter or a fork.  Add the flour and any other dry ingredients (such as salt, baking soda or powder, sugar, etc.) and give it a quick pulse.  Add the butter or shortening and pulse until the desired consistency is achieved.  Then add the fluid in small increments, gently pulsing, just until the dough comes together.

Making your own ground meat is a good idea on so many levels.  First, if you're a germaphobe, homemade ground beef is safer.  Not that standard ground beef is dangerous but if you have a need to push the food safety factor to the nth degree, then grind your own.

Second, you have complete control over what types of meat will comprise your admixture.  Supermarket ground meats can be an amalgamation of every miscellaneous scrap lying around the meat department.  By purchasing whole pieces of chuck, sirloin, round, etc., you can tailor your recipe exactly.

Finally, buying meat whole and grinding it yourself will produce a fresher, better flavor.

A meat grinder, either an old-fashioned hand-cranked model or the kind that attaches to an electric mixer, is the best tool for the job.  But it can be done in a food processor.  You must be careful to pulse it gently so you don't obliterate the meat and create a paste.  Cut the whole meat into manageable chunks first before adding it to the processor.  It will process more smoothly and consistently than one large piece.

Now here's where we want to pulverize ingredients into a smooth puree.  A food processor excels for these spreadable comestibles.  These items can vary a great deal in terms of their ingredients and procedural order.  Simply follow your particular recipe.  Here you don't need to pulse gently.  However, don't overfill the bowl and definitely scrape down the sides once or twice to ensure everything is fully incorporated.

If your spice mixture must be very finely ground, then an actual spice grinder will likely do the best job, especially for small amounts.  But for a slightly coarser grind, especially a larger quantity, a food processor is adequate.

I like to make my own ground hot pepper that I either add to food as is, or mix with oil to produce chili oil.  I place a large handful of dried chili in the processor and whiz them until ground.

Food Processor models change so quickly that I could recommend one today and tomorrow it might be obsolete. So I suggest you go by brand names. There are several very good manufacturers of food processors and I suggest you take a look at Cuisinart, KitchenAid and Viking.

Check out my sources below and find a model that fits your needs. Remember, you don’t have to have the biggest, baddest processor if you don’t do a lot of cooking, but they sure look good and are fun to own.

There are lots of sources for purchasing quality small kitchen appliances including blenders, toaster and mixers.  I suggest you check out your local department stores and kitchen supply shops but if you’re looking for a wide selection of products and prices, you may want to check out Amazon.com where I buy many of my favorite pieces of cookware.