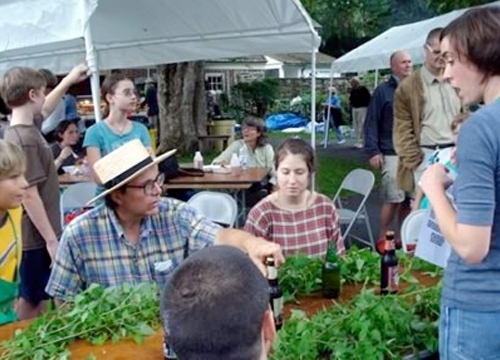 In June, my wife and I were happy to be invited to the Harriton Association's "Epicurean Extravaganza" fundraising event, where we played the role of "Epicures."

The event, held at the City Tavern in Philadelphia, sampled authentic 18th-century recipes that Charles Thomson and Thomas Jefferson enjoyed. Walter Staib, Chef and proprietor of City Tavern as well as Host of the Television Series, "A Taste of History," hosted the event and prepared the cuisine.

The event married the atmosphere of the City Tavern with the mission of the Harriton House. This was the first time the Harriton House had a fundraiser downtown and was met with an overwhelmingly warm response.

All of the waiters and bartenders were dressed in period colonial garb, giving the feeling that we had stepped back in time and were dining with the founding fathers. Back in the time of the writing of the Declaration of Independence, Benjamin Franklin, Thomas Jefferson and the like often ate and drank at the City Tavern.

The Harriton House, built in 1704, is located just down the road from us and hosts events all year round. Built by a Welsh Quaker named Rowland Ellis, the original 700 acre estate was owned by William Penn in the 1680's. It has been restored to the time when Charles Thomson occupied the home in the late 18th century, including objects and art he owned.

Aside from the daily tours and school visits, the Harriton House hosted events this year ranging from ice cream socials to the Welsh Heritage Festival to Beekeeping for Beginners. You can check out all of Harriton House's historical information as well as their programs and events at harritonhouse.org.

Walter Staib is not new to the Harriton Association. His PBS television series has several segments which were filmed at the Harriton House and farm. The three year series titled "A Taste of History" airs on nearly 50 PBS stations nationwide and explores America's culinary beginnings.

My wife and I would like to thank Bruce Gill, executive director of the Harriton Association and chef Walter Staib for his work on this successful event.   We along with everyone else had a great time and probably ate too much. I encourage anyone in the area to go visit Bruce at the Harriton House or have a meal at City Tavern. Both places take you back in history and offer a feel of America.