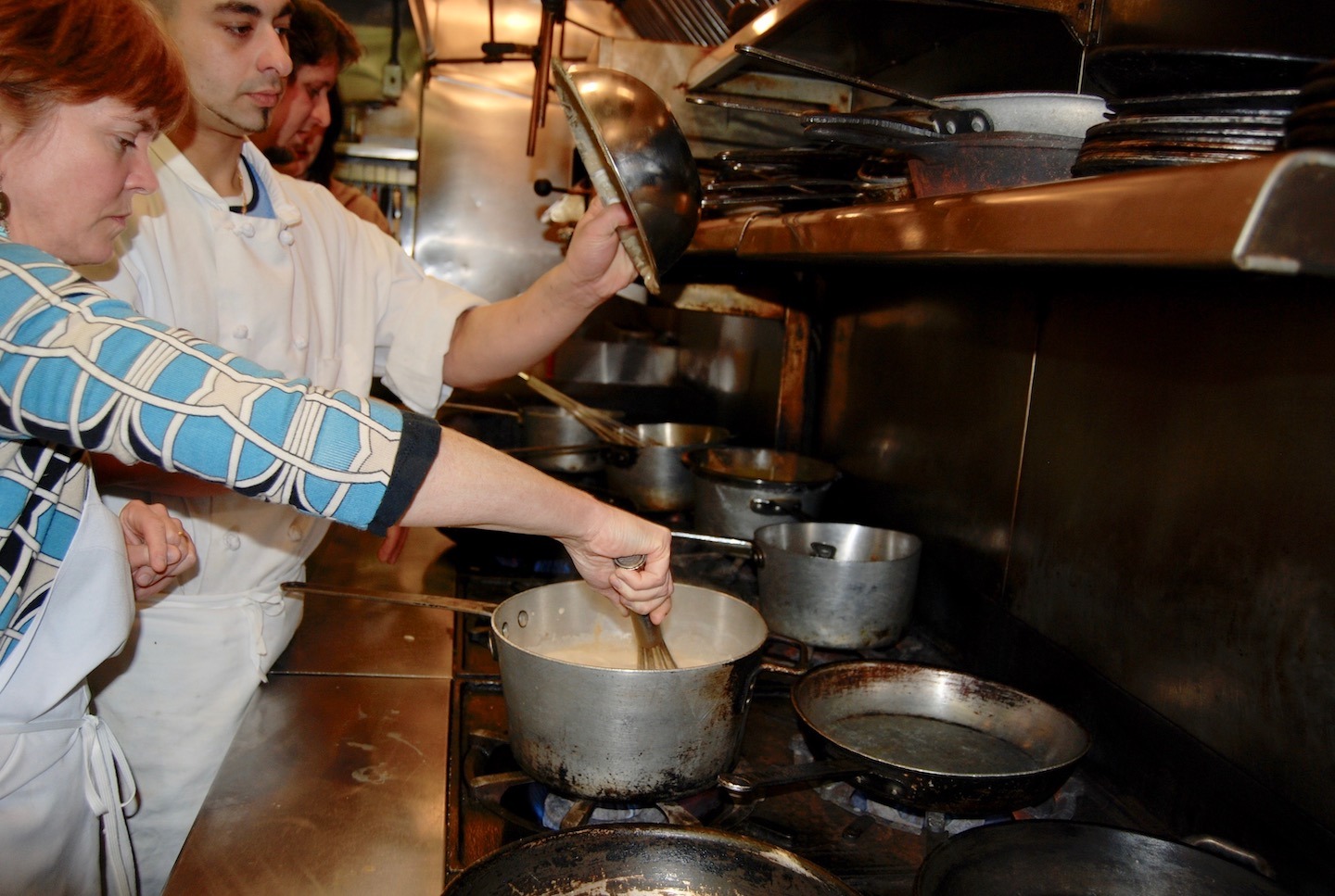 Cooking with a Pro

Even as a novice home cook, I would say I have a better than average knowledge when it comes to cooking, but the other night at Blackfish, one of the hottest new restaurants in the Main Line area, I was humbled.

My wife and I were invited there by our good friends Catherine and Eric Raymond to participate in an evening cooking class hosted by Carole Blum, the founder of Take Five, a day camp for women here in the Philadelphia suburbs.

After her campers drop off their kids at camp, they meet up with Carole to have their own day camp by taking cooking lessons, yoga classes, Pilate workouts, massages and of course, wine tasting.

Carole put together this cooking class for 18 of us on a Monday night when the restaurant is usually closed. We walked in, said hello, met the rest of the "cooking staff" who would be preparing the meal along with Chef Jeff Power and Chef Ashley Hess who were there to make sure we actually managed to prepare something we could eat and keep all our fingers attached.

This was a totally hands-on class so to decide who was going to prepare what, there was a fishbowl filled with slips of paper, each with a different dish from our abbreviated menu. Each couple picked out of the glass to see what they were going to prepare and headed back to the kitchen to get started.

As I said above, I am usually comfortable in a kitchen but to walk into a professional kitchen with all the "big" pots and pans and commercial sized equipment expected to make a meal for 18 people in less than an hour, I was truly intimidated. You just can't appreciate what goes on in the kitchen while you are sitting out front sipping your glass of wine. 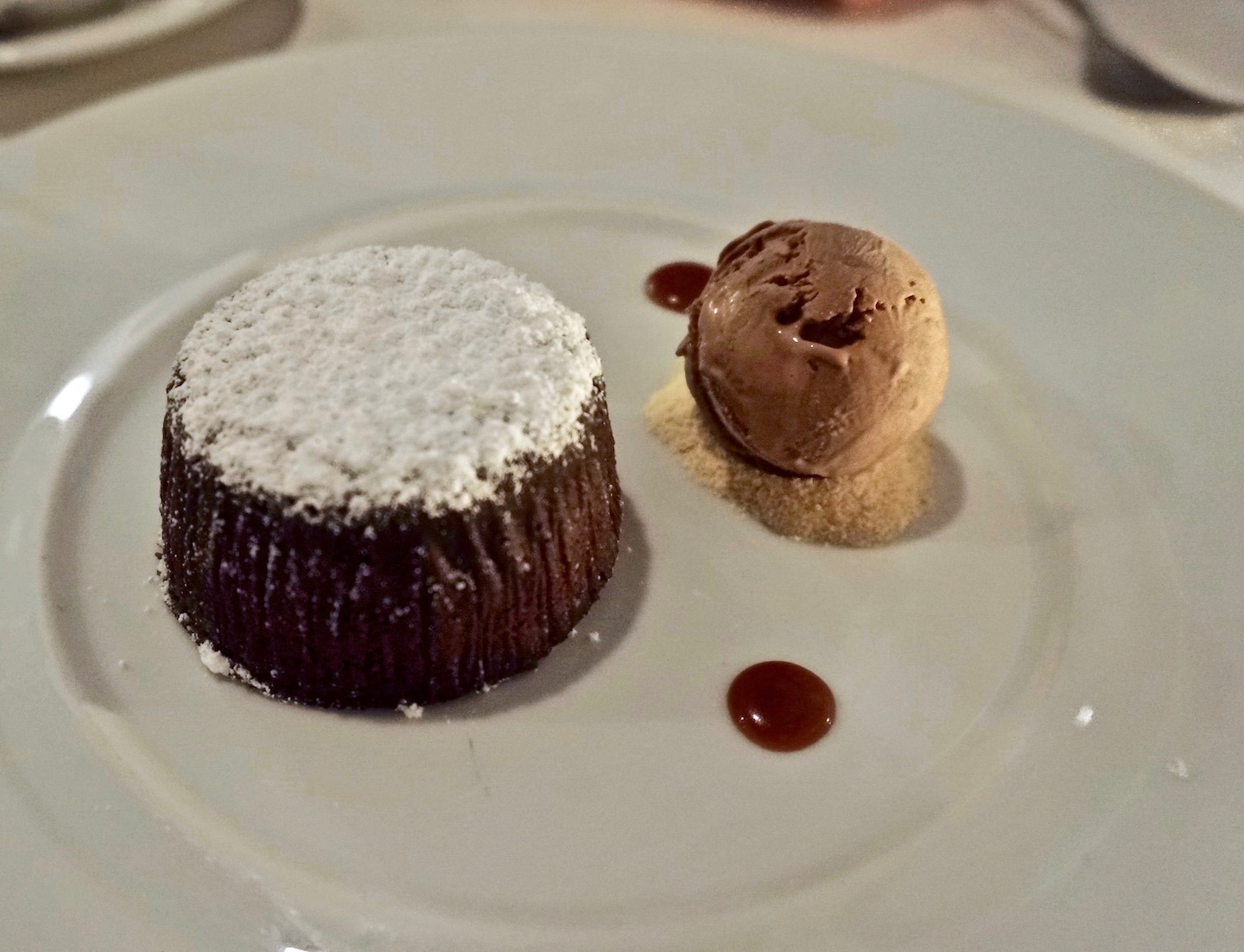 Our menu item was Molten Chocolate Cake. You know, that rich dark chocolate cake that oozes out hot liquid chocolate when you cut into it. Not being much of a baker, I was really getting nervous about how this would turn out especially after reading that we were going to make 20 of these molten cakes.

Chef Jeff came by often making recommendations on when to add this and how to fold that and then be off to help the couple dressing and trussing the chickens. He moved quickly through the kitchen giving advice and taking over when necessary.

Chef Ashley, who normally works the front of the house but is also a trained cook, walked around offering words of encouragement and calmly helping those who needed it.

The menu consisted of an appetizer of corn risotto, followed by roasted chicken with Jus de Poulet sauce, garlic mashed potatoes and eggplant Caponata and finished with our molten chocolate cake with sage gelato. Unfortunately the guys working on the gelato had a few problems and ended up with scrambled eggs before Chef Jeff could save them. Lucky for us, Jeff had some sage gelato as a back up in the freezer.

As for the wines, we started off with a Domaine Hering 2005 Pinot Gris, a white wine of Alsace, then a Georges Duboeuf 2005 Moulin-A-Vent, a red Beaujolais and finished with a Banfi Rosa Regale 2005, a sparkling Dolce red wine that was perfect with our molten chocolate cake and sage gelato.

Our chefs, Jeff and Ashley were great. They shared their cooking knowledge willingly, taught us new techniques and answered my numerous questions. I was like a little kid asking why this and why that. I had a blast. Thank you Jeff and Ashley.