Chicago is a city with a distinct personality and a formidable reputation.

The third-largest city in the United States, Chicago is nicknamed as "The Windy City." Home to some legendary personalities, and numerous historical events, the city of Chicago is an invigorating place to live. Founded in 1833, the city of Chicago quickly became a major transportation hub due to its close proximity to the Mississippi River, and the Great Lakes. In addition, Chicago was once home to the largest meatpacking facility in the world.

Home to thousands of restaurants and numerous gourmet eateries, Chicago is chock-full of entertainment (and career) options for culinary arts and hospitality management students. From the high-end stores and first-class hotels of the Magnificent Mile, to the nightlife excitement of Rush Street, residents and visitors to Chi-town have world-class entertainment at their fingertips.

The 10-acre lakefront Museum Campus is also a popular destination, featuring the Adler Planetarium, the Shedd Aquarium, and the Field Museum of Natural History.

Going to Culinary School in Chicago

A major player in the world of culinary arts, the city of Chicago is known for having a diverse and rich culinary history. From deep dish pizza to Chicago-style hotdogs, this Midwestern city is a food-lover's paradise Famous restaurants include Rosati's, Home Run Inn, and Aurelio's, to name just a few local favorites.

Other regional delights include the Maxwell Street Polish, and the Italian beef sandwich. In addition, the annual Taste of Chicago festival draws tourists and celebrity chefs from around the world, including Rick Bayless, Jean Joho, Charlie Trotter, and Rick Tramonto.

Kendall College is located at 900 N. North Branch Street, Chicago and offers several degrees in Culinary Arts. The program is designed to give you an exhaustive knowledge of the skills necessary to build a successful culinary career. No matter which degree you choose, you will be armed with expertise and experience in our innovative and practical culinary courses. 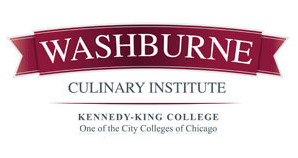 Washburne Culinary & Hospitality Institute and French Pastry School  offers Advanced Certificates in Baking and Pastry Arts as well as Culinary Arts.  there is also a program in Hospitality Management. The school is associated with the City Colleges of Chicago – Kennedy-King College and was founded more than 75 years ago making it one of the oldest culinary schools in the nation.

Home to nearly 45 million tourists each year, it's no surprise that the Chicago-O'Hare Airport is the second busiest airport in the world. From the notorious St. Valentine's Day Massacre, to the numerous escapades of Al Capone, visitors flock to see remnants from the age of Prohibition and the "Roaring 20's." In addition, Chicago is home to the third-most popular convention center in the US.

From the NFL's Chicago Bears, to the Chicago Cubs, Chicago is home to several iconic sporting teams and fields. Wrigley Field and Soldier Field are legends in their own right, in addition to the six-time NBA champion Chicago Bulls.

A major financial and economic center in the Midwestern United States, the city of Chicago is home to numerous Fortune 500 companies. This competitive and lively business environment is a great sign for prospective culinary arts and hospitality management students. McDonald's, Walgreens, Boeing, United Airlines, and Sears are just a couple of the major companies that are proud to call Chicago, IL home.