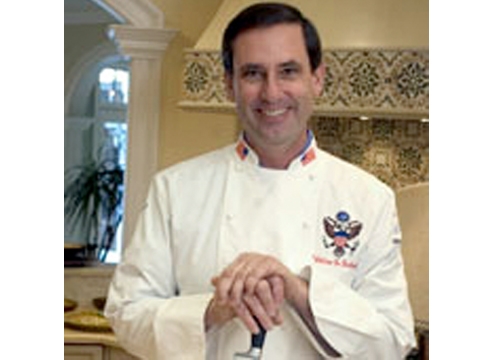 Once again I have the opportunity to share with you a very informative interview with a top American chef. This time with Chef Walter Scheib, an extraordinary person who was the previous executive White House chef for President Bill Clinton and President George W Bush. Not only did Chef Scheib give interesting responses about his time in the White House, he also offered incredible insight to anyone thinking of going to culinary school and entering the food industry. He also provided some great tips for home cooks who are afraid of trying new ideas at home. Read the interview here.

Like my previous interview with Chef Marc Vetri, I was given the opportunity to interview Chef Scheib by the folks marketing The Celebrity Chef Tour, an organization that showcases the talents of James Beard Award Winners by presenting them throughout the country to prepare award winning dinners to raise money to benefit the James Beard Foundation. For those of you who don't much about the James Beard Foundation, its mission is to "celebrate, preserve and nurture America's culinary heritage and diversity in order to elevate the appreciation of our culinary excellence."

Author of White House Chef: Eleven Years, Two Presidents, One Kitchen, Chef Walter Scheib is a graduate of the Culinary Institute of America and as he says, "For the last eleven years, I have had the honor of doing daily what most chefs would be lucky to do once in their life time. That honor was serving the First Family of the United States."

He was chosen to be the First Family executive chef after he impressed First Lady Hillary Clinton with the spa menu he developed while working for the Greenbrier resort. She personally hired him in April of 1994. Chef Scheib is a big fan of incorporating American products into his menu including local bread, artisan cheese, seasonal produce, US bred meat and local fish. He says, "America is rich in amazing produce, meats, and fish, using just a few excellent ingredients, anyone can make a perfect meal with very little formal training."

Chef Scheib's new corporation, The American Chef, allows him to share his knowledge, experiences and cuisine to audiences across the country. The American Chef offers team building courses using cooking as a process to bring business leaders together as well as cooking demonstrations at our nation's culinary schools. Chef Scheib also teaches classes on how to throw a White House Birthday Party.

To learn more about Chef Walter Scheib, I recommend you read my Novice2Pro Interview with him and also check out his web site, The American Chef.

« The Celebrity Chef Tour
All About Jamon Iberico de Bellota »