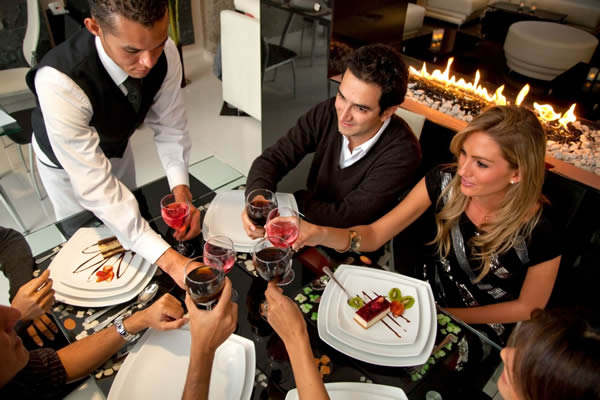 The Carrot & The Stick

Economic theory postulates that producers who offer shoddy products, dismal service, price gouge, or engage in otherwise shady exploits will be weeded out by shrinking demand or legal action.  The problem with this supposition is that it fails to consider a plethora of psychological variables on the part of the producers.

There are numerous factors that may mitigate the effect of, or even the prospect of, repercussions for untoward or inadequate business practices.  This failure to improve one’s product in the face of economic or legal punishment is one reason for the ubiquitousness of inferior food and food service.

On one hand there are plenty of food related enterprises that go belly up.  The restaurant business is particularly perilous.  On the other however, below average food or service persistently seems to be just a meal or shopping trip away.  So why don’t these entrepreneurs seem to benefit from the error of their ways?

Why Are Restaurant Losing Business?

At the most basic level I think many restaurants and food businesses are unaware of much of their customer dissatisfaction.  Most people don’t bother to lodge a formal complaint unless something flagrant has transpired.

Think about how many times you’ve been out to eat and the food was less then memorable.  The server asks you “how was everything”, and you reply with the perfunctory “fine.”  You don’t want to incite conflict, make a scene or confront the manager.  You simply pay your bill and decide to never go there again.

The restaurant loses business without ever knowing why, and thus cannot redeem itself.  In essence, they persist in their “crimes” because they don’t get “punished,” at least not in an immediate manner that enlightens them to their shortcomings.  Rather, sales slowly trickle away as the befuddled owner scratches his head.

Continuing on, sometimes businesses are cognizant of their lackluster product or unscrupulous deportment, as well as the possible penalties, but remain impervious.  This could be due to producers who are only after the short term gain and remain indifferent to the long term consequences.

A business owner seeking to make a quick buck may milk the establishment for all its worth, and then sell it or transform it into something else.

This get-rich-quick scenario is particularly true with outright criminal activity.  A recent story in the news reported the case of a fish importer now facing possible prison.  He was importing one species of fish that was subject to tariffs but misrepresented it as another species that was not only tariff free, but commanded a higher price.

He made millions on his scheme.  It’s quite possible he knew he would be caught someday but decided to ride the gravy train as long as he could.

Then again, there are many individuals who actually believe they’ll never get apprehended.  They’re in it for the long haul, but deluded by the notion that they can act with impunity.  Or maybe they’re just willing to take their chances.

Either way you and I are paying top dollar for the “grouper” that in reality is second rate Vietnamese catfish.

Another mechanism by which restaurants and food purveyors are immune to backlashes is when the business is very large.  A multi-billion dollar, nationwide hamburger chain is not going to get into a twist by a small percentage of overcooked burgers or greasy fries.  A few thousand crappy burgers out of “billions sold” aren’t going to put a dent in their bottom line.

Likewise, the manger of a booming and monolithic supermarket chain is going to give a rat’s you-know-what when the parsley isn’t fresh one day, one cashier was rude, or a few items in the sales flyer aren’t on the shelf.  If they’re big enough and making money, you and your petty little complaint are just a number.

Speaking of making money, another “get out of jail free card” occurs when the company is a cash cow, be it a small or large firm.  Christmas Eve I was standing in line at a very busy and understaffed fish market, one that has been in business for two generations, (so they should know their sales trends and staff needs by now).

Customers were taking numbers as in a deli.  The place was packed, the wait was long and I observed patrons walking out.

During the twenty minutes I waited seven individuals decided to bail, (as evidenced by their calling of a number with no one to step forward).  Think about that.  That translates into 21 extra sales they could have made per hour, if only they had adequate personnel.

Interestingly, I noticed a number of employees and one of the owners leisurely standing around in the back room, apathetic to the restless crowd.  And then it hit me.

He was making so much money, that he didn’t need to expend the extra effort to provide auxiliary staff, alleviate the wait of the frustrated patrons, and make even more money!  Thus, in rare instances, when a business is raking it in, the consequences of less than optimal products or service are inconsequential.

Finally, and we all know some, are the people who just don’t learn from their mistakes.  They just don’t get it.  They’ll obdurate to the point of financial ruin.

Customers grumble, business recedes, and they still remain pig-headed.  Sometimes it’s simply a function of the human ego.  It’s so easy for an arrogant chef to attribute a grouse about the food to the customer, or for a server to blame their paltry tip on the diner’s miserly inclinations.

It’s the oldest defense in the book.  By degrading the complainer you invalidate their complaint and thus don’t have to take any personal responsibility.  This “shooting the messenger” approach is a topic in a soon to be released book by business historian Richard Tedlow entitled “Denial: Why Business Leaders Fail to Look Facts in the Face.” As the name implies, his book is about how businesses fail to see the writing on the wall because of various forms of denial.

Therefore, “punishment” for inferior products or service, be it a loss of revenue, a tainted reputation, or even outright prosecution, doesn’t always result in an improvement in the product or service in question.  There are plenty of intervening variables throwing monkey wrenches into the simplistic stimulus-response paradigm.

There will always be discourteous servers, overcooked steaks, inefficient ministrations, and most disturbing, outright thievery.  As customers, if our protestations are left unheeded, our only recourse may be to take our business elsewhere.  Hopefully to someone who cares about the stick as much as the carrot.

« Who’s Who In A Professional Kitchen ?
What To Eat After Having A Tooth Pulled »