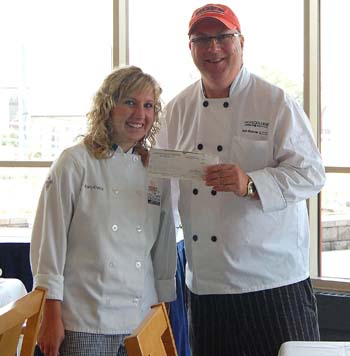 Once again I am delighted to announce a new recipient for The Reluctant Gourmet Culinary Grant in association with Chef4Students. This is the 3rd award I've been honored to give out to a culinary student in need of financial assistance. The winner this year is Karly Krentz from the Secchia Institute for Culinary Arts in Grand Rapids, MI.

For the 2009/2010 academic year, Chefs4Students received more than 1350 applications from students at over 39 different culinary schools across the country and abroad. Eligible students attended a culinary school at the time of the award, show proof of their financial need, provide letters of recommendation, transcripts and a 500-word essay.

Chef David Nelson, co-founder of Chef4Students (no longer in operatin - sorry) and a panel consisting of several certified chefs, business executives and culinary professionals from various organizations across the globe carefully reviewed the applicants to pick several top candidates. At this point, I was able to review those picks and choose a student as the recipient of The Reluctant Gourmet culinary grant. It was not easy to choose a candidate; they all had great backgrounds and well written essays.

Karly is 18 years old, attended Fruitport High School and is now attending Secchia Institute for Culinary Education (SICE).  In high school she was part of the culinary arts team in 2008 and 2009.  After high school Karly moved to Grand Rapids to attend SICE.   I want to share with you a portion of Karly's essay sent in with her application talking about her experiences in high school with the culinary team.

Fruitport High School offers a unique culinary arts class which runs for 2½ hours every day. This class consists of book work, the lunch program for the teachers, a culinary management team, and a culinary arts team. I originally enrolled in this class because it seemed fun, and I had extra time to fill in my schedule. I never expected this single class to have such a profound impact on my life and future career path.

As the class began I decided that I was going to try out for the culinary team. Tryouts were based on knife skills that were taught to us by a Grand Rapids community college graduate, as well as two of the best chefs in Michigan. I didn't know too much about knife skills, or have much knowledge of culinary for that matter, but many chopped up carrots later, I was chosen to be part of the team. At this point I did not understand the commitment that this team would involve, but I found that out quickly.

That year Karly and her teammates placed first in state for the fourth year in a row, a real testament to the students and their coaches Chefs Christian Madsen and Scott Hunter.   This win meant a trip to San Diego, California for a chance to compete in a high school national culinary competition where they ended up placing second in the nation.   In her senior year, Karly and her teammates continued the dynasty and took home the gold medal in the state competition for the fifth year in a row.

About Secchia Institute for Culinary Education

As one of only two culinary arts programs in the nation, SICE has been awarded American Culinary Federation accreditation for three consecutive seven-year cycles - 21 years.  So you can see the Secchia Institute for Culinary Education offers educational excellence, experienced faculty and affordability - a great combination for their student's success. 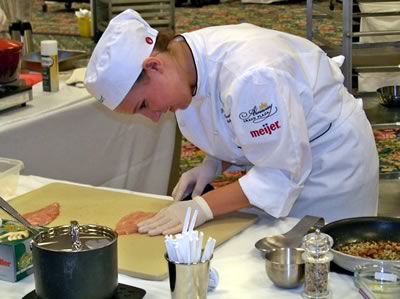 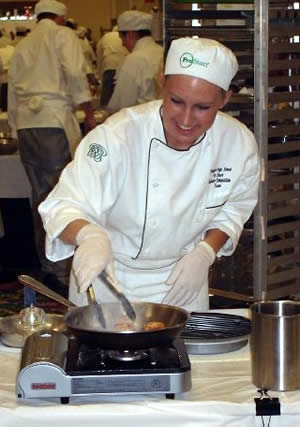 After reading Karly's references required in the grant process, I can only say that the future looks bright for her. Quoting Michael Wheeler, her Fruitport high school culinary arts instructor,

I cannot overstate Karly's level of integrity or dedication. She loves her craft and is excelling in culinary school at GRCC. She has trained under chefs from a Five Diamond restaurant and these men have come to respect her tremendously not only for her dedication but her character. Karly is a wonderful asset to this great industry and I wholeheartedly would recommend her for her ability and enthusiasm.

I'm hoping to interview Karly in the near future and ask her about her experiences in school and maybe get her to keep us up to date on her achievements while at school. It is a wonderful honor and brings me great pleasure to be able to help students like Karly in some small way to achieve their dreams.