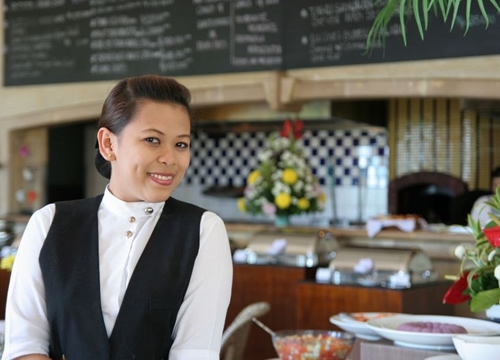 The Truth About On Time Restaurant Service

Why is it that some people are always late? Sure, we all have times where unforeseen circumstances prevent us from being punctual. But by the same token, we all know individuals who time after time, can never be on time.

Regardless of the event, location, or hour, they fail to be ready or arrive in a timely fashion. This has always baffled me.

As someone who's always prompt, I can't seem to fathom the chronic latecomers. Why is it so difficult to gauge the amount of time needed to prepare for an affair, factor in the travel time, throw in a little extra for unexpected glitches, and then begin preparations accordingly?

I think it boils down to two factors, which aren't mutually exclusive. These Johnny-come-lately are either disorganized individuals, mercilessly inept at planning their lives, or they simply just don't give a damn. This second explanation is more disturbing as it reveals an attitude of impertinence and a blatant disregard for others.

The other day I went to lunch at a new Indian buffet. Allow me to preface the story by pointing out that this establishment has changed hands more times than a cold virus. It was an American restaurant, then Mexican, then Indian, then Italian, and now Indian again.

I arrived at 11:25 and queried what time they commenced lunch. I was told 11:30 so I read my newspaper for five minutes and returned. When I did the buffet was still not prepared.

At 11:50, with most of the chafing dishes still empty, I left. Unfortunately I was pressed for time. If their time management is portentous, then I expect a cuisine from yet another culture very soon. I fear this place may be on borrowed time.

Again, the question haunts me. Is the management that disorganized or do they just not care? Either way, this new Indian establishment didn't curry my favor. Big time.

The preceding example was a buffet, but a similar scenario occurs when ordering food at a traditional eatery. Nobody likes waiting an inordinate amount of time for their dinner.

But what exactly is "an inordinate amount of time." Oh, look who's back, and just in time, our old friend subjectivity.

When You Get Your Meal

Many factors influence what is an appropriate amount of time to wait for your meal: the nature of the restaurant, the type of food, how it's prepared, the assiduousness of the staff, the number of other patrons, and probably many other idiosyncratic factors.

Generally speaking, more upscale establishments grant more time between courses. At a luxurious restaurant, one is there to dine and bask in the experience; to spend, shall we say, quality time.

Preeminent eateries also feature more complicated dishes that require being made to order.

Conversely, your local diner proffers simpler food, with as many things made ahead of time as possible. Better establishments also tend to have more staff, and hopefully, better trained and managed staff.

Finally, any restaurant is going to be more overwhelmed and hence a little slower during prime time, as opposed to a lazy weekday night. So at what point do you remonstrate and declare it's high time that the food arrive? Again, a very subjective matter.

However, the time issue cuts both ways. Restaurateurs are no more delighted by patrons who arrive late for their dinner reservations. This throws their schedule off and depending on seating times, may force them to cut short your stay for the next reservation.

It's always prudent to arrive for your dinner a little early. They may be able to take you prematurely.Or if you have some time on your hands you can kill some time at the bar with a pre-dinner cocktail. Alcohol certainly makes time fly.

It's also just as disjointing for the home cook when guests arrive late for your dinner party. A cocktail party accompanied by hors d'oeuvres has flexibility. But with a formal sit-down dinner, it's perplexing to decide when to put the roast in the oven when inviting lollygaggers. There are three strategies for dealing with this.

First, prepare any items that can be made ahead of time which will not detract from the final outcome. A pasta sauce can be made in advance and heated up when needed.

A salad can be completed and resting in the fridge, waiting for the appropriate moment. Remember, a stitch in time saves nine.

Second, for items that require extended cooking, (like large roasts), coordinate them to be completed an hour after the guests are supposed to arrive. If they are punctual, then you can have a cocktail hour or start on the salad in the interim. Thus the main entree can be ready in the nick of time.

A final crafty stratagem when coordinating dinner parties for the compulsively late, is to tell them an estimated time of arrival, or ETA in airline speak, ahead of the time you actually planned.

In summary, be it due to internal chaos or outright insensitivity, there will always be laggards throwing monkey wrenches into the schedules of the organized. They say that time and tide wait for no man.

Maybe we shouldn't revamp our planning to coincide with their tardiness. This merely enables the dawdlers and provides no impetus for them to modify their behavior.

Perhaps we should forge ahead as planned and let them suffer the consequences of their dilly-dallying. Maybe if dinner began without them or their restaurant reservation is cut short they may rethink their future timing.

These actions of course send a message and can cause a tinge of interpersonal friction. But do it for old time's sake.