This years Great Chefs Event to raise money for Alex's Lemonade Stand Foundation was a huge success. They doubled the number of participants and I'm sure not one patron walked away hungry. Everyone seemed to have had a great time. I know I did.

As a Silver Sponsor this year, I was able to bring some friends and everyone of them told me how much they enjoyed the event and couldn't believe how incredible the food was. I met as many of the chefs as I could while maneuvering around the big tents they set up on North Broadway here in Philadelphia.

I have no idea how much money they raised but it must have been a bunch. There was a silent auction plus a live auction that raised a ton of money but the coolest auction of the night occurred when Bobby Flay from the Food Network and Mesa Grill Restaurants got up there and offered to cook a dinner for six people at his home in New York City. He said he would cook until everyone was full. That went for around $16,000 and I'm sure the winner and his friends will enjoy every moment of that night.

It was great meeting so many of my favorite chefs. Some I have read about in the cooking magazines, some I've read their cookbooks and others I have met at previous Great Chef events. One of the most interesting non-chefs I met was Tom Kehoe and his wife. Tom is president of Yards Brewing Company and he invited me to come visit his brewery to learn about making Yards beer.

We had a great conversation about matching beer to food and I had no idea about how various beers, like wines, work with the foods you eat. I hope to interview Tom and get him to expand on his food and beer matching.

Here are some of the chefs I met and the plates they served. I'll post a couple of their recipes next week.

Chef Kiong Banh was one of the first chefs I met and he is an incredibly gracious man. He served his escargot fondue made with snails, crimini mushrooms, butter, Pernod and a few other ingredients. It was the first dish I tasted and I knew I was in for a treat for the rest of the night. 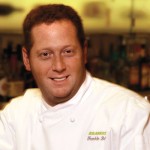 I don't remember meeting Chef Franklin Becker from Abe & Arthur's in New York but I do remember his Big Eye Tuna ala Plancha with black olive sea salt & extra virgin olive oil. Chef Becker is a graduate of the prestigious Culinary Institute of America where he graduated with honors. After being diagnosed in 1997 with type 2 diabetes, Chef Becker changed his cooking style and even wrote a cookbook for people with diabetes called The Diabetic Chef 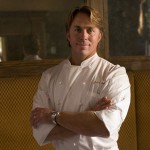 John Besh, the executive chef and owner of Restaurant August, Besh Steak, Luke and La Provence is from New Orleans and one of the most easy going celebrity chefs I met all night. He too is a graduate from the Culinary Institute of America and I hope to interview him one of these days for my Novice2Pro page and ask him how he manages to run four popular restaurants. I can't imagine how difficult it must be to own and run just one restaurant. Chef Besh served Wild Berry Flambe over Lemon Ricotta Filled Crepes and I know you will all want this recipe next week. It was incredibly delicious. 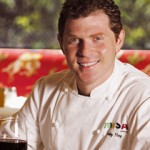 It took a while to get near Bobby Flay's station but that is understandable because of his celebrity status but his dish was also one of the most interesting and in my humble opinion most creative dishes of the night. He served Smoked Shrimp with Key Lime-Coconut Sauce in half coconuts. They looked incredibly amazing and tasted even better. I don't know how many people he had on his staff, but when I looked over, Chef Flay was in constant motion assembling his dish for the throngs of people. When the crowd moved on I made my way up to the table filled with a couple of dozen coconut concoctions and asked which one should I take, Chef Flay replied, "Just don't take the wrong one!" 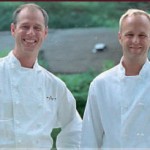 Two of my favorite chefs who come to this event from Ogunquit, Maine every are Clark Frasier and Mark Gaier of Arrows, MC Perkins Cove and SummerWinter.  Chef Frasier grew up in sunny California but learned many of his cooking skills while living in Beijing, China. Chef Gaier grew up in Dayton, Ohio and studied culinary arts in Boston under Jean Wallach. This year they served a wonderful Barbecue Duck in Lettuce Cups. I'll share their recipe with you next week. 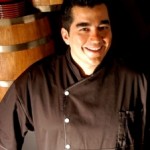 I'm sorry to say I didn't meet Chef Jose Garces because he is local and I've dined at his Tapas restaurant, Amada, and his Basque cuisine restaurant Tinto. He has been on Food Network's Iron Chef America and wrote a cookbook last year called Latin Evolution. Chef Garces served Oyster Ceviche. 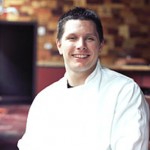 Another Culinary Institute of America graduate (are we beginning to see a pattern here) is Jeff Michaud, executive chef / part owner of Osteria with Chef Marc Vetri where the party was hosted. Chef Michaud grew up in New Hampshire and started his cooking career in  a pizza shop at the young age of 13. After coming to work for Chef Vetri as his Sous Chef, Chef Michaud decided to follow Vetri's path and go to Bergamo, Lombardia, Italy to work and learn Italian cooking at the top regional restaurants include Frosio and La Lucanda. Chef Michaud served Grilled Veal Sausage with Spring Onion Mostarda.

There were many more culinary delights by some of America's best chefs and I will try to post more of them in upcoming posts along with some recipes but I would like to urge all of you to visit the Alex's Lemonade Stand website, learn more about Alex's story, what the foundation is doing and how to become involved. This is truly one of the great ways food and people can come together.