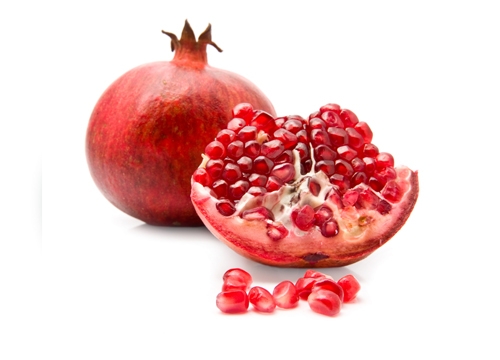 Also Called The Fruit of Paradise

Pomegranates are one of the "hot" ingredients these days. You hear about them in all the cooking magazines and on the cooking shows. How long they will be "in" is anybody's guess but for now, they are and they do make a great addition to many recipes. To read more about pomegranates and how they are used in cooking, go to All About Pomegranates.

The History of the Pomegranate

Depending on where you look for information, pomegranates might be called the "fruit of the underworld," the "fruit of paradise," or more simply, the "seeded apple." Those who prefer the more exotic names are likely to revere the fruit for its inherent link to sensuality.

One look at the hundreds of glistening crimson seeds inside each pomegranate, and it's no wonder why people have been associating them with fertility for thousands of years. Just a single taste of the pomegranate has often been considered enough to tempt even the gods and goddesses into extraordinary actions.

Shrouded in mystery and centuries of folklore, the pomegranate is one of the most revered fruits in existence. Tales of pomegranates"”whether they are found in Greek myths, Biblical texts, or ancient manuscripts"”are spread throughout the world. It seems that no country or culture has been able to evolve without at least a passing reference to this exotic and delicious fruit.

Pomegranates have been a presence on the tables and serving platters of ancient Egyptians and Arabs for millennia. They originated in Persia, but from the earliest known references, they were commonly found in the surrounding areas of Georgia, Armenia, and other Mediterranean lands.

China also figures prominently as one of the early aficionados of the pomegranate; the fruit's origins there can be traced back to 100 BC.

Although the earliest pomegranate bushes grew wild and uninhibited throughout the Middle East, they have long been cultivated for sale and personal use. Armenia, in particular, has a detailed history of interaction with the pomegranate, with actual fossilized remains evident from as far back as 1000 BC.

Even today, the nation congratulates itself on its lengthy and sincere devotion to the pomegranate. This stamp of approval is actually quite important for even the most exacting fruit critics, as Armenia is known for its multitude of exotic and delicious fruits.

As the pomegranate grew in popularity and use, it spread to other lands and civilizations. Its introduction was almost always met with enthusiasm. In fact, its preserved remains have even been found in the excavated tombs of ancient Egyptians, so sure were they that no journey to the hereafter was complete without this enchanting fruit.

Wherever the pomegranate traveled, it was adopted and renamed. They figured prominently in the banquets of Indian royalty and accompanied Arab traders as they made their way throughout the Middle East, enticing merchants and members of the higher classes.

Romans called it the "Punic apple" and cultivated it extensively. When it was brought to Spain around 800 AD, it became the national emblem and was even the basis for the naming of the city of Granada (derived from the pomegranate's Spanish name).

Some tales even link the term "grenade" to the pomegranate, as the eighteenth century French compared the spreading of the pomegranate's seeds with the scattering of debris from the weapon's explosion.

In comparison to the pomegranate's antiquity, it wasn't until fairly recently that the pomegranate made its way to the Americas. It came in the wake of the conquistadors of Spain, spreading throughout the United States alongside Jesuit missionaries and other cultivators.

It has since become most popular in the South and in California, where the climate and the love of all things delectable have worked enormously in the pomegranate's favor.

The pomegranate has even been extolled by the likes of history's most beloved legends and written works. Ancient Greeks used the pomegranate in a number of mythological tales. The Bible refers to it numerous times; some even believe the forbidden fruit of the Garden of Eden was actually a pomegranate.

This idea is reinforced by the pomegranate's long-held association with fertility and sensuality. Chaucer, Homer, and Shakespeare are also among those devoted to its enigma, as the fruit figures in The Canterbury Tales, The Odyssey, and Romeo and Juliet.

No matter when or where the pomegranate was first encountered, almost all cultures have enjoyed its tart, jeweled seeds and numerous culinary and medicinal uses. It has been a time-honored traveler for thousands of years: it has been the main attraction for royal dining, a means of enticing others into temptation, and a companion for the afterword.

It's no wonder that this colorful fruit only continues to gain in popularity and consumption.