Study in one of America’s Top 5 New Food Cities,* where you can work closely with farmers, artisan cheese and chocolate makers, and family-owned ranches to curate the flavors you want to create. The includes this Salt Lake City culinary school.

Quickly becoming a destination for the international elite, Utah hosts seven world-class ski areas within an hour of Salt Lake City. Park City is said to have more chefs per capita than even Paris, and now boasts the largest ski area in America.

Enjoy a quality of life that no longer exists in other parts of the country. Pristine lakes and rivers for fishing, beautiful red rock canyons, wild elk and buffalo, and miles upon miles of hiking and mountain biking trails.

Small farms in Utah collaborate with Chefs to grow edible flowers, mini herbs and greens Chefs would like to incorporate in their dishes. Local cheesemakers work with Chefs to create spice rubs and flavor profiles for cheeses that get awards throughout the country.

Become a part of a movement that is bringing cooking back to the community, in a city that is attracting some of the World’s Best Chefs.

Their Award-Winning Chefs each have over twenty years of experience and have real-world experience as the Executive Chefs of notable restaurants and resorts. Trained around the world, several have successfully grown their own businesses, consult other Chefs, and are sought out by national TV shows to compete with celebrity chefs.

They take pride in offering a program that is shorter and more affordable than other culinary schools. Our students have received job offers with increases as high as 17% after just two months of training. The hands-on classes with such notable Chefs attract career changers and entrepreneurs, and both novice and experienced cooks.

About the Professional Certificate in Culinary Arts

Choose between 8-week and 16-week programs. Both day and evening programs are available. Level I (160 hours) includes knife skills, restaurant sauces, how to carve poultry, butcher meat and fillet fish, how to work with shellfish and lobster, how to make pasta from scratch, risotto, potato dishes, vegetables, and how to make engaging hors d’oeuvres.

About one third of the program is pastry, baking, bread, chocolate and candy. In addition to the fundamentals, students learn a few fun extras like how to make cheese and charcuterie. An optional Level II (160 hours) goes further into international cuisines, preserving and pickling.

More advanced pastry skills are taught. Premium ingredients are introduced, such as duck and game. 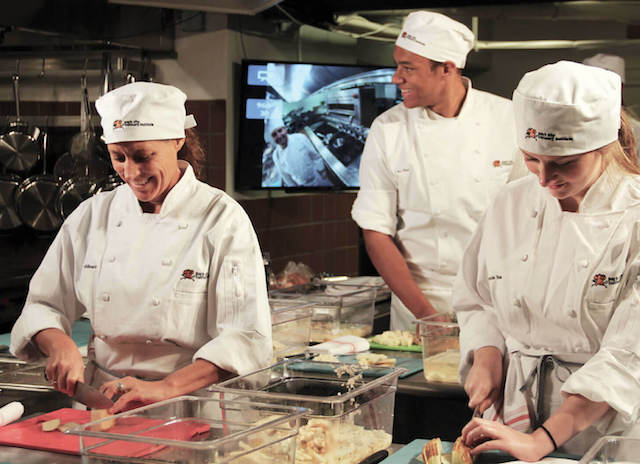 About the Faculty at this Salt Lake City Culinary School

To give you some flavor of their faculty, our Culinary Director worked with the Ritz Carlton to train the teams opening over a dozen restaurants around the world, in cities such as Osaka, Barcelona, Shanghai and Dubai.

While many of those restaurants have Michelin stars, two of the restaurants Chef Houman Gohary helped open and train earned a highly-coveted Three Michelin Stars.

Chef Gohary was also part of the task force that coined Southwestern Cuisine. They’ve all heard of it now, but back in the 1980’s, the Southwest wasn’t known for its food.

Chef Gohary was part of a team of Chefs that worked to define and develop Southwestern Cuisine, transforming how people eat in the Southwest, and turning the region into a destination for foodies.

Houman Gohary has competed one-on-one with Bobby Flay on the Food Network, appeared on the Discovery Channel and NBC’s Today Show. Trained in Austria and San Francisco, he’s won numerous awards including Chef of the Year.

Chef Gregory Neville has been a repeated featured Chef of the James Beard Foundation. His acclaimed restaurant Lugano was listed by Zagat’s as one of the Best Italian Restaurants in the country for eleven years.

*According to Wine Enthusiast