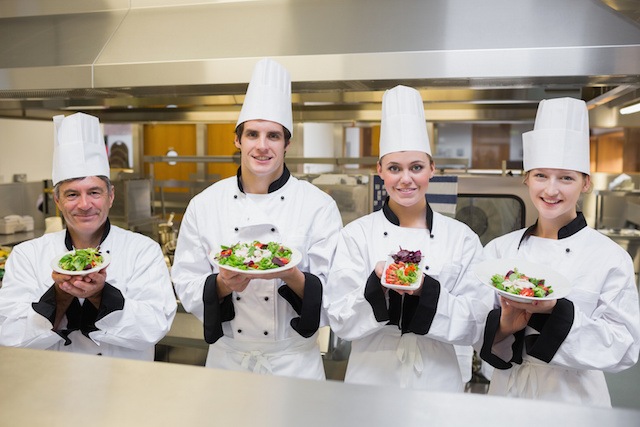 When you think of the last time you dined out at a restaurant, what are the things that stick out most in your mind? Is it the food, either good or bad, that leaves a lasting impression, determining whether or not you will return in the future?

Is it the service that was offered? Was your waiter friendly, helpful, and knowledgeable about the food, or were you ignored and brushed off as just another nuisance in the life of your server??

All of these are expected questions, and the answers to most are just as common, but have you ever really thought about what goes into the plate that is brought to your table?

Have you realized just how much labor goes into making just one dinner?

It all starts at the back door of the restaurant, where semi trucks unload thousands of dollars of product every morning. Aside from monthly inventory for cost control purposes, most chefs do daily inventory of more perishable products such as beef, poultry, pork, seafood, dairy, and produce.

Unless they happen to be working for a large chain restaurant, where food is ordered from a central commissary, independent restaurant chefs order in smaller quantities not only to ensure product freshness, but to be able to take advantage of seasonal availability of many types of foods like produce and seafood.

As you are probably aware, most fruits and vegetables are associated with certain times of year, such as squash and pumpkins in the fall, or strawberries in the summertime. Taking advantage of this cyclical rotation allows chefs to experiment, create, and market menus that are fresh, exciting and appealing to customers year-round.

It starts with the chef

Aside from ordering food, the chef is responsible for a myriad of things, ranging from employee training, menu development, spoilage and waste control, to budgeting and the overall ambiance of the establishment. Simply having an eye and a palette for food does not make one a chef.

The ability to delegate, organize and maximize labor is another part of the job. Being aware of all things that are occurring at all times is necessary to any successful restaurateur or chef, and here is where the job of the sous chef begins.

He or she works closely in collaboration with the executive chef to ensure that menu items are being produced correctly and in a timely manner.

Also, part of the ordering responsibilities may fall into the realm of the sous chef, as well as ensuring proper food safety and sanitation in the kitchen at all times. Although the food is the major concern of the kitchen leaders, it far from the only responsibility.

Then There are the Prep Cooks & Line Cooks

After the food is received and stored, prep cooks step in to break down foods into usable products. These are the people who peel potatoes by the case, cook soups by the stock pot, and transform sides and loins of beef into recognizable steaks.

They work as the un-tiring engine of the restaurant, providing chefs and cooks with the base products they need day in and day out. Obviously the duties of a prep person vary infinitely from restaurant to restaurant, but there is a general feel for the work they do, using product in bulk, rather than individual servings.

From this point, line cooks enter the picture, beginning their shift by gathering everything that they need for the day. For many, a line cook's station is his home, and you would no more take any of his mis en place than you would walk into his house and take his stereo.

The work that these men and women do, for most is more a part of life than simply a job. There are no consumer reports, no office efficient meetings, no end of the month deadlines to avoid, and certainly no "Hawaiian shirt Fridays“.

Those who have earned their bones in an establishment use jargon more akin to a battlefield than a kitchen, to be ready for a busy night is to be "ready for war“, and they are, quite literally "in the line of fire" all night, every night.

In any restaurant, no matter the size, shape, or concept, these individuals are hired based on their ability to produce, efficiently and professionally, the menu items created by the chef.

Where the prep cook leaves off the chain of fabrication, the line cook picks up. Sauces are finished and portioned for the night's use, vegetables and starches are stocked on the line, meats and seafood are divided, rotated, and stocked for the evening's business, and low boys (line coolers) are filled with backups of product.

Universally found in any kitchen on any station are pitchers of oil for sautéing; wine, for deglazing and thinning sauces; bouillon cups of salt and white pepper; tongs; clean rags; garlic; shallots; and two or three knives for slicing, mincing, boning and trimming meat.

All of these things are considered to be an extension of said cook, and most are highly protective and territorial of the product that they use. (This really is no joke to many cooks, and I've seen numerous fights break out over what seems like the tiniest infraction of this un-spoken rule, some of which have turned into brawls involving verbal and physical abuse.)

While the term multitasking has become prevalent in today's society, most people think in terms of information analysis; the ability to focus on, all at once, email, conference calls, colleagues' and subordinates' progress, and any number of distractions present in the office.

On the line, however, this word takes on an entirely different meaning. Each cook is responsible for creating any number of entrees, appetizers, salads, and/or desserts flawlessly over and over again.

Herein lies a craft unknown to the majority of Americans in the workforce today- physical reproduction of a highly perishable product, from 50-60 times a day, all the while having to take into account the taste, texture, and visual appeal of each dish.

The art and craft of professional cooking is a technique learned and mastered over a lifetime, with a constantly changing lineup of raw product, served to a fickle and demanding clientele. Not only does the dish need to be executed in a timely manner, with incredible attention paid to detail each time, but each individual cook (or station chef) must choreograph his efforts with everyone else in the kitchen.

What it all entails!

Just for a minute, really think about what this entails- The server must know when to tell the cooks what to fire, which, through the rise of technology and computers, has become easier and more efficient in the last decade, but the lead chef, or expediter, must know how to read the tickets, to time each dish so that your well done pork chop finishes at the same time as your brother's rare steak, as well as your aunt's summer salad.

All of this in turn, must be spaced so that you have ample time to finish your appetizer, and so that your dessert is not prepared and at your table halfway through your dinner... All of this work, just for your table, and think, you are only one table, in one server's station out of all the people coming to dine in one evening.

Let's take a moment and return to the kitchen, where the cooks are preparing your pork chop.

The person on the grill, at any time ( depending on the size of the restaurant,) can have upwards of two dozen steaks, chops, chicken breasts, and cuts of fish cooking at once, all of which have to be done to a specific temperature, following strict federal sanitation regulations, and with a mind for presentation each and every time.

He is also more than likely working about a foot and a half away from the sauté cook, who is busy trying to remember how many of each type of pasta he has working, all the while, getting orders for baked fish, and shellfish Diavlo, veal Parmesan, working in a 110 degree environment, surrounded by boiling oil, open flames, razor sharp knives, and three or four other people scrambling to get all manner of things done.

Not many people really stop to think about all this when they say to a waiter, "I know I ordered this medium rare, but it's a little bloody. Can you send it back to be cooked Well Done?"

In a business where dinners are served at the tempo of more than 100 an hour, any bump in the road, a dropped call, an over or under cooked cut of meat, or a scorched sauce, can bring the entire operation to a screeching halt. This is partially the reason why cooks get a bad reputation for being temperamental, moody, and high strung.

When someone spends their shift depending on other people to be as prepared, as well trained, as competent and as efficient as they are, it's understandable that there is a little tension from time to time, but when all is in order and the ship runs smoothly, there is nothing quite like being part of a team who provides a service to consumers unlike any other known today.

Although they walk tough and talk tough, people who work in the culinary industry are people pleasers. No one wants more than to hear a compliment from a table that the food was excellent and the dinner as a whole was fantastic. (well, ok, perhaps bigger paycheck and a few more days off, but that's getting a little off track…)

Chefs across the country and around the world do what they do because they have a passion for food, a desire to express themselves quite literally through the work they do, and to have as many people as possible enjoy with them the fruits of their labor.

« The Making of A Chef
Food and Cooking Posters »