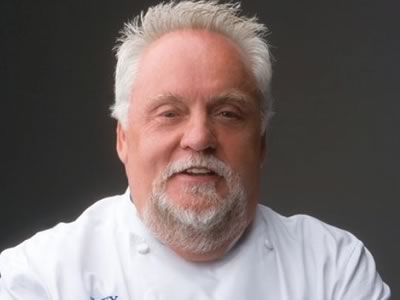 "Always be willing to experiment and try something new." - Chef Walter Staib

Chef Walter Staib is a third generation restaurateur with over 40 years experience in the kitchen. He is also the person responsible for rescuing our historic City Tavern Restaurant that was originally established in 1773 and was the social and economic center for a young Philadelphia.

You may have seen him on one of your favorite cooking shows including The Food Network’s “Cooking Live with Sara Moulton” or “Keith Famie’s Adventures”. He will soon be on a new series of cooking shows called “Cooking with History” to be aired in the Philadelphia area on CN8.

Chef Staib has won more awards than I can list here but some of the more notable ones include the prestigious Knights Cross of the Order of Merit of the Federal Republic of German, Seven Stars & Strips Award for Excellence in Hospitality, Five Star Diamond Award for both Chef and Restaurant by the American Academy of Hospitality Sciences, Food Art’s Silver Spoon Award plus many more.

Chef Staib is also the author of three cookbooks including The City Tavern Cookbook, a look at 200 years of classic recipes from America’s first gourmet restaurant and one I have on my nightstand right now. I love reading about Philadelphia’s history and seeing what Thomas Jefferson and Ben Franklin were dining on while they were spending time here.

His other cookbook, The City Tavern Baking and Dessert Cookbook is filled with simple-to-make desserts that were typical back in the days of George Washington, John Adams and the rest of that crowd.

His third cookbook, Black Forest Cuisine, I just picked up at a small local cooking class put on by Albertson’s Cooking School that featured Chef Staib demonstrating some of his favorite grilling techniques. I had the good fortune to speak with him after the class and ask him to be on my web site. He kindly accepted and you can read my Novice to Pro interview with him below.

You can also read all about the history of City Tavern Restaurant at their very cool web site and learn more about Chef Staib at his web site. I encourage you to visit the City Tavern if you are ever here in the Philadelphia area. It’s a piece of history you will never forget.

Growing up in the Breuninger family (my mothers maiden name) really sparked my interest in the culinary arts from a very early age.  Growing up in this family of chefs and restaurateurs, I knew early on that my life would somehow revolve around food.

Out of this long line of relatives, brothers, sisters, cousins and nephews, my family always believed I was the one who would commit to a culinary career.

My uncle Walter, My aunt Ruth, and of course my mother.  At the age of four, I started spending most of my free time in the kitchen at my aunt and uncles establishment, Gasthaus zum Buckenberg.  My uncle worked mostly in the butcher shop, while my aunt spent most of her time cooking and organizing daily menus.

What Did You Learn From Them?

They always told me that a culinary career was hard work, but very rewarding.

Did you go to culinary school and if so where?

I attended school in Lucerne, Switzerland.  Later, I attended the University of New Hampshire Center for Constructive Change.  In addition to the training I received working with my family; I also had a wonderful apprenticeship at the Hotel Post in Nagold at age 14.  This is where my formal training really began.

This elegant hotel was renowned for its cuisine and many high-profile patrons, including Napoleon Bonaparte.  I was quite lucky because by the time I began my three-year apprenticeship, I had already acquired ten years of cooking experience at the Gasthaus zum Buckenberg.  I was so lucky because I was already familiar with the routines of a professional kitchen and was armed with a wealth of knowledge.

It was a lot of work!  There were mostly a lot of really tough, long days.  Most of the time we worked 6 days a week for 14 hours a day.  By the time I completed my apprenticeship I really had achieved the status of a young professional chef.  The military-like system in which I trained had taught me much, but I knew I still needed more experience in order to advance in the culinary field.

Can you recall a funny culinary student story and share it with us?

There are so many stories!  When I first started my apprenticeship, I was asked to hang up spaghetti so it would dry.  They told me to hang each piece individually with a clothespin.  I actually did it, but then realized that the joke was on me.  It was funny, but I got my revenge.

What was your first job as a professional cook and what was that like?

I was a commis (trainee but with lots to do) at the Sommerberg Hotel in Bad Wilbad.  It was pretty tough because I was much younger than my peers.  However, it provided me with the proper experience I needed to advance in the culinary field and further refine my expertise.

What would you say to a novice in the kitchen to help them get over their fear of cooking?

Just cook. Ppractice makes perfect.  And to always remember one important thing, do not experiment with new recipes or cuisine when entertaining guests!

What 2 mistakes do you see home cooks make?

The most common mistakes are not following recipes and not having the proper equipment.  I think these two things are very important.

What is your favorite style of cooking and what about that style most appeals to you?

Pan-Asian.  It is light, healthy, and flavorful.  It is about joie de vivre!

In your opinion, what are the most important elements when creating a recipe from scratch?

Spice grinder or a coffee grinder.

My favorite is allspice.  It is so versatile and it has such a unique flavor especially when you grind the berries la minute.

What is the most underrated ingredient in your opinion?

Once, I had a VIP banquet.  The dessert was a beautiful souffle.  We put it in the oven and proceeded to prepare the remainder of the dinner.  I forgot one important thing, to check and make sure the oven was on.  As it turned out, it was off and the souffles were never cooked.  Instead of serving the guests a succulent souffle, they got a story as to why there were none.

What cooking tips would you recommend to every home cook?

I do not usually cook for myself at home because there is never enough time.  When I do, I enjoy a nice hearty stew.

What is your signature dish or your favorite recipe?

Thank you and I hope you enjoyed the interview.