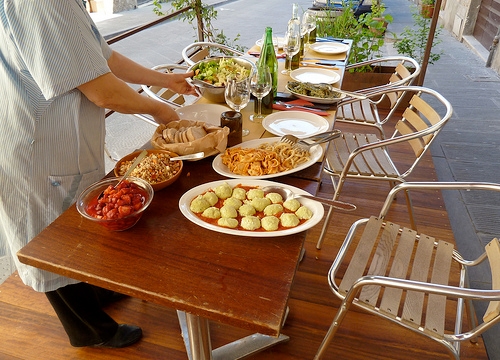 Dining Out In Italy with Greg Cerretani

A few weeks ago, I told you about this year's Reluctant Gourmet in association with Chef4Students.org culinary grant winner, Gregory Cerretani. Currently enrolled at Le Cordon Bleu College of Culinary Arts in Boston and completing his studies in an externship in Italy, Greg is a great student, hard worker and has a bright future ahead of him. I had the pleasure to interview Greg about his culinary experiences and what he's learning over in Italy.

After reading Greg's interview I wanted to run down to my kitchen and start preparing an Italian meal for dinner. So if you are having trouble motivating yourself to cook tonight, check out Greg's interview and I think that will change. To view the entire interview with Greg Cerretani.

Eating and Cooking In Italy

I so thoroughly enjoyed Greg's interview responses, I asked him to consider becoming a contributing writer and suggested he write a couple of posts about his time in Italy where he is working to finish his externship for Le Cordon Bleu in Boston. Because the summer is here and many Americans will be traveling to Italy on vacation, I asked him to talk about dining out in Italy. I wanted him to share with us his thoughts on finding great restaurants in small towns that may not be in your travel guide. Here's what Greg had to say. If you know anyone traveling to Italy anytime soon, please let them know about this post. It is full of useful information and tips . 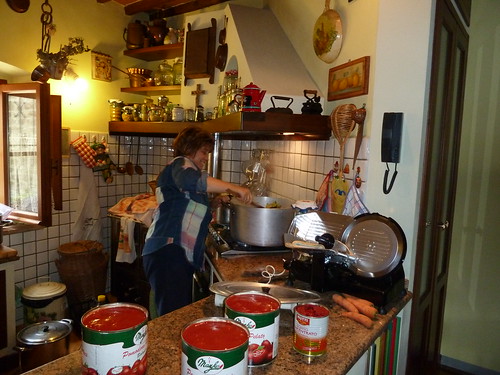 An American in the Heart of Tuscany by Gregory Cerretani

I am lucky enough to be completing the externship portion of my Le Cordon Bleu education in Italy.  I work in a restaurant called Officina della Cucina Popolare which is located in a city called Colle di Val d'Elsa.  This city is located in Tuscany between Florence and Siena.  I have learned quite a bit in my time and would like to share my experiences as both a fan of food and someone who works in the culinary arts.

What I Learned by Eating in Italy

The first thing I have to recommend to anyone who is planning on visiting Italy is learn some Italian.  Even if you only learn how to say "Hello" (Ciao), "Bye" (Ciao), and "I'm sorry I only speak a little Italian" (Mi dispiace solo parlo un po' italiano), you will gain a lot of respect by just trying to communicate in the native tongue.

The major cities and any tourist areas will have English speaking guides or at least some literature available in English, but if you plan on visiting smaller towns a little bit of Italian goes a long way.  Most restaurants, especially those near tourist attractions, have English translations on the menu or menus available in English.  Many of these restaurants have "Tourist Menus" that offer easily recognizable dishes like lasagna and spaghetti but for the more adventurous eaters a whole new world of culinary delights is available down just about any side street.

To find out how real Tuscans eat your best bet is to find a Tuscan chef and follow them around until it is their day off and see where they go to eat.  If the idea of stalking someone who spends all day with a knife in their hand doesn't sound appetizing to you (pun entirely intended), the next best thing is to find the nearest bar and join the locals for an aperitivo.

Food and drink is an excuse for Italians to socialize and often before dinner you will find people crowding into bars for a drink and a lively debate over where to go for dinner.  If you find a friendly local, just walk up and ask what their favorite restaurant is (Qual Ã¨ il tuo ristorante preferito?).

I am willing to bet they will gladly share this information and probably tell you what they believe is the best dish.  I wouldn't be surprised if they walked you right to the restaurant and asked you to join them for dinner either.

When eating in a Tuscan restaurant there are a few subtle differences that may take some getting used to.  First of all, you will not be getting your salad at the beginning of the meal.  Italians enjoy their salad at the end of the meal or with the main course.

Secondly, the main course, or second plate comes by itself, and if you want potatoes or any other side dish, you need to take a look at the "contorni" or side dishes section of the menu.

The next thing that may come as a surprise is that the dessert or the "dolce" course will not be as sweet as it is at home.  For instance, the whipped cream in Italy is just that - whipped cream here has no sugar added.

Lastly, tipping is not customary in Italy.  If you look at the bottom of the menu there will be a section that says "coperto" or "servizio."  A coperto is a cover charge which pays for your bread and oil and is usually a fixed per-person charge.  A servizio is a service charge which is generally a percentage of the bill.  If you found the service and/or the food exceptional, it's nice but not expected to leave a few Euros on the table. 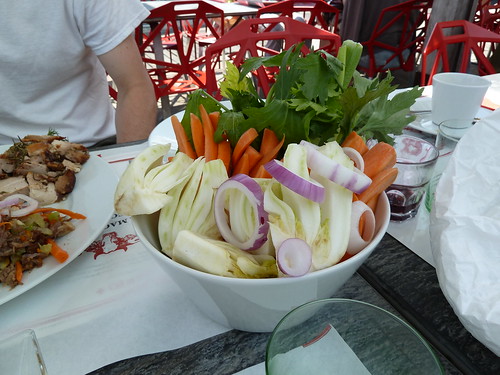 What I Learned by Cooking in Italy

I learned several lessons by working in the kitchen of my restaurant and by talking to the staff, other restaurant workers, and suppliers.  Food and wine is a way of life in Italy and there are some unspoken rules that set Italians apart from the tourists.  If you want to blend in and really live the Tuscan lifestyle, here a few pointers to keep you from sticking out like a sore thumb.

First of all there is the subject of breakfast.  Breakfast is generally a small meal consisting of a coffee drink and a cornetto or croissant which is eaten standing up at a counter.   If you take your breakfast outside to sit down be prepared to pay a coperto fee, which is probably going to be more than your breakfast costs.

Cappuccino is a breakfast drink and no Italian would be caught dead drinking a cappuccino after ten in the morning.   A cappuccino at lunch is a dead giveaway that you don't live around here.  Another red flag is ordering espresso; in these parts they call it "caffé."

When enjoying lunch or dinner in Tuscany, you will usually only find ingredients that grow in the area.  If you are in a small mountain town and see fish on the menu, be afraid"¦be very afraid.

Many Tuscan establishments have rotating seasonal menus that utilize whatever is in season at the time, as fresh ingredients are preferred over their canned counterparts.   This means the restaurant you went to last summer will probably not have that delicious gazpacho on the menu if you return in the Fall.  There are some staple items that will be found year round, like dried meats and pasta, but half of the fun of eating in Tuscany is enjoying what the changing of seasons brings.

Speaking of pasta, here are some tips on what not to order.  If you see spaghetti and meatballs on the menu, you are in a restaurant for tourists.  The closest a true Tuscan will ever get to having meat and pasta on the same plate is when ordering pasta with ragu sauce.

Another pasta no-no is fettuccini Alfredo.  First of all, Alfredo sauce is an American creation and is another indicator that you are in a tourist restaurant.  Furthermore, no Tuscan chef is going to put cream in a pasta sauce, so even if you tell him the recipe and ask really nicely he still isn't going to whip you up a batch of Alfredo, tomato-basil-cream, or vodka sauce.

One more thing that may insult the kitchen is to order your meat cooked anything beyond medium.  Not only does a Tuscan chef have a close personal relationship with his butcher but there is a very good chance they have actually seen the animal that the sausage or steak came from.  If you aren't asked how you would like a dish prepared, it will be a little pink in the middle - this is normal.

It's a cardinal sin to order the Bistecca Fiorentina, a large bone-in steak similar to a T-bone steak, well done.  I have actually seen my chef go out to a table and explain that he will cook it to medium at the most and if you will not settle for anything less than well done, you will not be eating Bistecca in his restaurant.

In closing, to truly eat like a Tuscan there are only a few things you need to keep in mind.