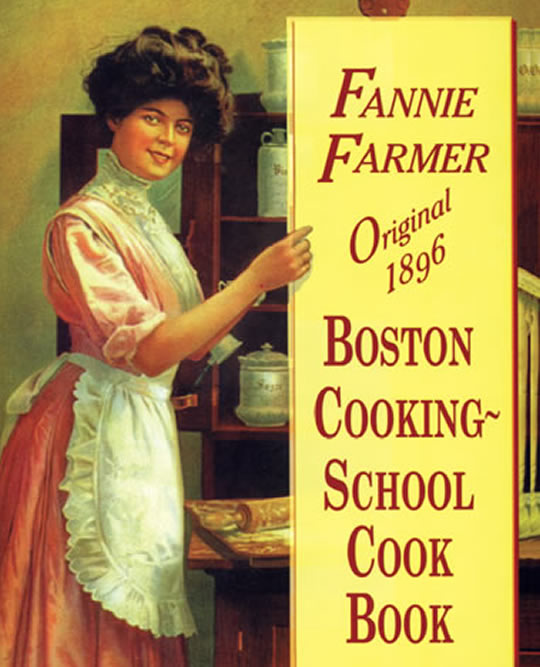 Looking for Something Special For a Home Cook This Year?

Also known as Dover Books, you’ll find many republications from the public domain in their collection including classic works of literature from the 18th and 19th century. One of Dover’s best sellers was The Principle of Relativity by Albert Einstein. The company was purchased by Courier Corporation in 2000, the year Hayward Cirker died at the age of 82.

Not surprising, the books sent to me are all cooking related. Three of them are reprints and the fourth, The First American Cookbook is a “facsimile” of “American Cookery” originally published in 1796.

A facsimile is an exact copy of the original book. Rather than transcribe the text and reproduce it in a new style like many reproductions on the market today, a facsimile takes photographs of the individual pages, including the cover and illustrations and makes them into a new book that looks just like the original.

These books are reprints of some very popular works from their day. One of them, Fannie Farmer’s Boston Cooking School Cook Book by Fannie Merritt Farmer is a reprint of the original 1896 version and offers the reader some some innovations that may be considered commonplace today but in their day were noteworthy. For example, it was the first time a cookbook used terms like "a level cupful, teaspoonful and tablespoonful."

It's a big book filled with step-by-step instructions suitable for both novice cooks as well as "practiced" cooks. "A delightful repository of information for nostalgia buffs and a useful aid for today's homemaker."

There have been many editions, the last one being the 13th edition by Marion Cunningham. Over the years each edition is revised to meet the culinary needs of current home cooks but this original reprint of the the original 1896 version is a wealth of information about how people were eating in this country in the late 19th century.

The First American Cookbook facsimile a very short book by Amelia Simmons but includes truly American recipes like Indian pudding,slapjacks Johnny Cakes plus a recipe for brewing spruce beer.  The first time the words “cookie” and “slaw” show up in any publication appear in this book. You’ll even learn how to dress a turtle if that’s something you’ve ever been inclined to do. And I don’t mean with a little coat and slippers.

It took me a minute or two to figure out the symbol that looks like an “”f throughout the book is really an “s” so when you see a word that looks like feafood, it is really seafood. There’s a informative introduction essay by Mary Tolford Wilson describing some historical culinary background to help you better understand where Amelia Simmons was coming from.

Native Harvests by E. Barrie Kavasch was first published in 1977 and Dover republished it in 2005. It is way more than a cookbook filled with recipes but a guide to “foraging” and living off the land. As Craig Claiborne said, “The most intelligent and brilliantly researched book on the food of the American Indian.”

Yes, it has recipes for clam chowder and sautéed mushrooms but also includes recipes for clover soup, acorn coffee, purslane salad. And who doesn’t want to know how to make Gruel, a combination of water, white cornmeal and maple syrup.

At the end of the book there is a chapter called Wild Medicines and Cosmetics where you’ll learn about wild plants like American White Hellebore and Bloodroot and how these plants can be used to used in medicine.

There is also a chapter on Wild Smoking Mixture describing some of the plants used by the American Indians for smoking. Did you know it was the American Indians who first introduced smoking to the early settlers. The Indians used smoking for medicinal and ceremonial purposes and appear to smoke just about anything they could get into their pipes.

An interesting book for anyone who is interested in early Indian culture and the foods our American Indians dined on.

If you are interested in New Orleans Creole cooking, this unabridged reproduction of the 1901 2nd edition by The Picayune newspaper. It is filled with hundreds of recipes including gumbos, French breads, soups, rice dishes and jambalaya with influences from Spain, France, Africa and native Choctaw Indians.

If you like reading about or cooking a variety of different foods not normally found in modern day cookbooks like eel, frogs, turtle, lambs brains, partridge and a whole lot more, this cookbook is going to be a gold mine of recipes. There are plenty of wonderful recipes for shrimp, crab, chicken, beef for the less adventurous and they all have one thing in common and that’s Creole style cuisine.

A collection of recipes “collected directly from the cooks and housekeepers who were the finest practitioners of Creole cuisine, this volume is the bible of many of Louisiana cook and a delight to gourmets everywhere.

If you are looking for something different for a friend or family member who not only loves to cook but enjoys the history of various cuisines from this country and the country's that influenced them, any one of these books is worth taking a look at.