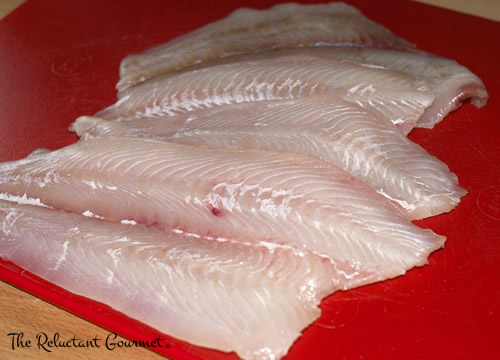 How to Buy Seafood - Advice from a Professional Chef

Recently I received an email from Diane who wanted to know why the grouper she bought in bulk didn't look like grouper she purchased in the past. In fact, she questioned whether or not it was really grouper at all. Here's what she said,

"I have been a grouper lover for years and up until recently I have enjoyed it frequently.  I purchased it through a food company that provides meat, poultry and fish in bulk.  In my last two orders I have received a fish that they are calling grouper, but it doesn't look or taste like grouper.

I am used to a nice white very light fish.  This fish is off white with brown coloration through it and it is a very thick fish.  It doesn't flake like grouper; it forks off in larger pieces.  The company is insisting that it is grouper, just a different kind.

They said that there was a problem with the grouper from Florida so they are getting it somewhere else.  I told them that all grouper is a translucent white thin fillet until cooked.  Is it possible that I am getting grouper?  I have no idea where to turn with this issue...." -  Diane

So here was a situation where Diane was buying fish site unseen, very similar to when a chef buys fish from his supplier without seeing it. He has to trust his fish purveyor will bring him what he wants and the fish people know he will return it if it does not meet his specifications. We have the advantage of going to the market, seeing the fish and if feeling bold, asking the fishmonger to let us smell it for freshness.

Most of us wouldn't dream of smelling fish before purchasing but it is a good practice to get into. Nothing is more frustrating than buying some fresh fish at the market only to bring it home, give it a smell and realize it is not as fresh as you thought it was. By asking the fish person to smell it, they realize you know what you are doing and will give you a little more consideration next time you come in to buy fish.

What Does A Professional Think?

I asked my friend Chef Alan Bickel about Diane's situation. Chef Alan had been working at a seafood restaurant called Cascade's Seafood Restaurant, part of the Gaylord Opryland Resort in Nashville, TN but just recently moved on to a brand new restaurant at the Union Station Hotel in downtown Nashville called Prime 108 and will be working with Chef Tom Cook. I'm hoping we get some updates from Alan as he settles into the new position.

Here is what Alan said about Diane's grouper situation:

At first glance, when receiving a cut of fish that is not what you expected, it is understandable to think your fish company is ripping you off, sending you whatever they've got kicking around their coolers.  This can be particularly upsetting when you've been getting the same kind of fish reliably for a period of time and then it suddenly changes.

The first question I have for Diane is "What specifications did she provide her fishmonger?  How specific was she? Did she ask for:

PBO (Pin Bone Out) - PBO Boned is similar to Boned but the additional step has been taken to remove the pesky little pin bones. Note the term "PBO Boned" does not mean completely boneless.

Who knew there were so many specifications when ordering fish? - RG

If you're dealing with a company who knows anything about fish, they'll be knowledgeable of what they're sending as well as being able to answer all of your questions.  On the flip side if you want to consistently receive good product, it really pays to know your stuff.

At this time, I know there are almost twenty species of grouper that are commercially fished, some of which are not true 'grouper' but are close enough to be considered the same. The same goes for sea bass, salmon, trout.

Even some species of shellfish have counterparts and look-alikes that aren't identical.  The only way to be truly sure that you're getting exactly what you want is to go to the market and put your eyes on the piece of fish that you want to buy.

"Subbing out" is a common industry practice that comes from the fact that the only way to get fish (unless you're talking about farm raised) is to send out a boat and drop lines.  Sometimes fishermen don't catch much.  Sometimes weather prohibits day-boats from going out.  Sometimes the fish just aren't there...

So instead of not selling you anything, most companies will send you something they feel is a close substitute.  If you haven't discussed in detail what you are looking for, the characteristics of the meat, and the flavor profile, your purveyor won't know what's acceptable and what isn't.

Which leads back to actually seeing the fish you're buying.  I don't know what part of the county you're living in but there are many large grocery chains that have great seafood departments including Publix, Wegmans, etc that you should feel pretty comfortable buying from.

Aside from that, most cities have farmer's markets and depending on your distance from large bodies of water, you might be able to get some really fresh stuff at reasonable prices. Hope this helps. - Chef Alan

If you want to learn more about Epinephelinae, I mean grouper, I suggest you try the following resources:

Check out what Wikipedia has to say about Grouper

For a good article on fresh grouper from the St. Petersburg Times, Click Here