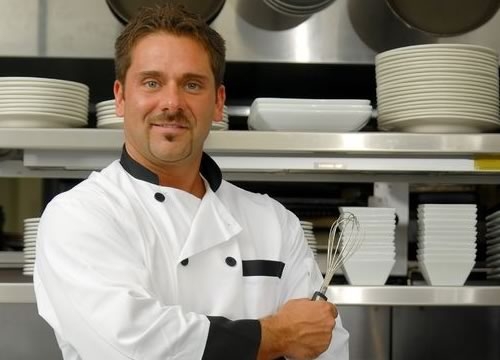 Chefs often question, warn, or even outright discourage individuals from seeking to join their ranks. I believe this emanates from the people frustrated with their dead-end, cubicle-trapped jobs, plopped on their Sunday couches watching Emeril “bam” his way through a couple dishes, and saying to themselves: “I could do that.”

These amateur cooks naively believe that there is a correlation between preparing homemade or TV Cooking Postersmeals and the professional kitchen. Worse yet, they may have stars in their eyes.

My friend Claudia who teaches culinary journalism, often comments about how the pupils in her class “all think they’re gonna be the next Ruth Reichl.”

I don’t think it’s these individuals’ dreams per se that ruffle the feathers of culinary professionals. Rather, I believe it is their lack of appreciation for the incredible amount of difficulty that lies ahead to even come within sight, if ever, of such aspirations.

Even people with no goals of stardom, who just wish to cook professionally, may lack an appreciation for the disparity between their home kitchen and the real world.

I am not here to discourage anybody. I am simply going to give you the naked truth. You decide what to do with it. Forget being a celebrity chef for the moment. If you just simply aspire to be a professional chef, expect years of working 50+ hours a week, nights, weekends and holidays, for limited pay, in high stress situations.

Still not discouraged? OK, let’s start at the beginning.

Should you attend culinary school?   Well, it’s not absolutely necessary.

Experience is the ultimate teacher. But education coupled with experience is even better. But here’s another point of contention with professional chefs. They abhor people fresh out of school who think they know it all.

Learning about a dish and making it once or twice in school is nothing compared to the person who’s done it 400 times. Although there’s a cerebral component, learning how to cook requires the acquisition of numerous physical skills.

These skills can only be successfully achieved from repeatedly performing them. Schooling will give you a good platform from which to begin, and make you more hirable. But it is only the start.

Next, you won’t go from school to behind the line making entrees. Oh no. You will do more than your share of “scut work” first.

Forget your homemade meatloaf and potatoes. Think standing on your feet for hours on end filling raviolis, cleaning artichokes, peeling boxes of asparagus, gutting 50 lobsters, etc., and being expected to perform these monotonous, mechanistic chores with assembly line speed and accuracy.

How long you remain here depends on the restaurant and your skills. Eventually, if all goes well, you will be groomed for working the line, i.e., cooking the main items.

Even though being a line cook is more prestigious, the hours remain grueling and you are under even more pressure to get the food out. Line cooks can work non-stop for hours during the height of service with no chance for even a bathroom break.

If you’re good you’ll eventually become a sous chef. This is the second in command, right under the executive chef.

The hours are still long, you’ll still sweat your you-know-what off working the line, and now you have the added responsibility of policing everyone else in the kitchen. Of course this position brings more prestige and money.

A sous chef’s ultimate goal is to become an executive chef. Hard work, better than average ability, and sometimes a little bit of luck are all needed to reach that plateau.

Sometimes the executive chef is also the owner, the ultimate goal in chefdom: owning your own restaurant. But always remember, no matter where you are on the totem pole in the restaurant business, it is never a nine to five proposition. It is your life.

Of course there are other culinary occupations. There are cooking school teachers, food stylists, caterers, and restaurant consultants to name a few.

But inevitably, these people have spent years paying their dues in front of hot stoves when everybody else was out having fun or being with their family. Or you could become, HA, a food writer.

You probably have a better chance of ending up on the Food Network than being able to support yourself, (let alone a family), by food writing alone. At the risk of sounding discouraging, the stars in people’s eyes are ultimately the result of being beat over the head with reality.