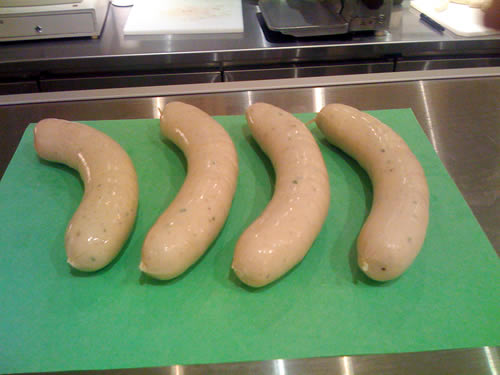 An Introduction to German Sausages

Bratwurst, Knockwurst, Bockwurst....all part of the wurst family. They may all sound very similar but they are very different. You have your pork varieties, then your veal varieties and then there is the veal and beef varieties and so on. I don't know about you, but I still have to ask my butcher which is which when I go to the market.

I thought it would be interesting to take a closer look at some of the more popular types of wurst and look at where they came from, how to cook them, what you can serve with them and how to make them.

There is a poll for which is your favorite wurst and links to some great wurst recipes including my own for Bratwurst with Sauerkraut and homemade mustard. You'll find some great photos of various types of wurst and a place to leave your comments, experiences or recipes that have to do with these German sausages.

Who Knew There Was So Much Wurst Merchandise

Looking for the wurst stuff on the Internet? Need a wurst gift to give that someone special? Look no further, here it is:

Wurst is the German word for sausage. That’s it-no big mystery. But with over 1200 varieties of wursts and so many conflicting stories on their origin and spicing, there is still plenty about wursts that could use some clearing up. So, let’s take a look at types of wursts, how wursts are made, identify some of the more well-known wursts and learn to cook and serve them.

Sausages are classified in many different ways, depending on the country of origin. There are three general German wurst classifications: raw, cooked and pre-cooked.

Raw wursts are cured, usually through lactic acid fermentation. Raw sausages can then be dried, smoked or even brined. These types of sausages have a relatively long shelf life.

Cooked sausages generally contain water and emulsifiers, such as egg yolks. Precooked sausages are sausages that have been made from meat that has been previously cooked before mixing and casing. Both the cooked and precooked types of wursts have a short shelf life and must be kept under refrigeration. 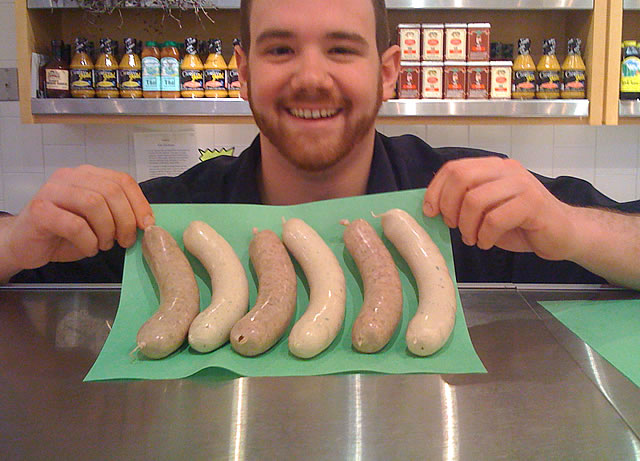 Dan from Stoltzfus Meats showing me his wurst.

What's A Brat Without German Mustard?

What Are They Made From?

Generally speaking-and we have to be general here, since there are over 1200 types of German wursts-wursts are made from pork, fat and spices. The grind can be fine, coarse, or fine with larger chunks of meat added in for texture. Some wursts contain beef or veal; some contain dairy products.

No matter what they are made from, wursts were developed as a way to minimize waste after butchering. Like so many famous national dishes, in wursts, German cooks found a way to take scraps and offal and put them together in an appetizing package. As well, many of the raw/cured sausages enabled meats to be kept for longer periods of time, so, like pickling, canning and salting, sausage making is also a form of food preservation.

How To Make Homemade Bratwurst

Great video on how to make great bratwurst at home.

There are many ways to cook wursts. Steaming, grilling, pan-frying and poaching (or a combination of poaching and grilling) are all options. When cooking whole links, it is best to use gentle heat so the interior cooks all the way through. No matter how you choose to cook your wursts, you'll want to prick the casings all over with a small knife so the wurst doesn't burst out of the casing during the cooking process.

I'm sure you've all seen the commercial that shows sausages being kept warm in a beer bath. This is a very viable way not only to reheat wursts or keep them warm but also to add some additional flavor to the wursts. Adding onion to the beer adds even more flavor. Just heat beer and a sliced onion together and add the wursts. Don't let your beer bath boil, or your wurst casings will split. Use a malty, darker beer for strong sausages and a more hoppy beer for sweeter sausages. 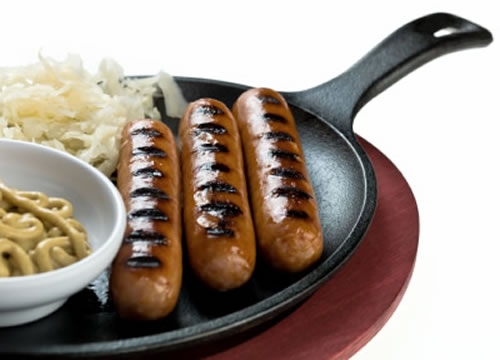 Check out my simple but delicious recipe for Bratwurst with Sauerkraut and homemade mustard.

What to Serve Them With

Wursts are traditionally served with a variety of mustards, breads and sauerkraut. I think this might be the crux of the ketchup-no ketchup debate on hot dogs here in the US. A hot dog is a type of wurst, most likely derived from frankfurters, and as such, ketchup should never touch them.

This is what the purists say, anyway. Eat yours how you like them.If you are wondering how best to serve your wursts, you really can't go wrong with a nice hard roll or pretzel roll, some spicy mustard and some sauerkraut. For a lower-carb option, you could also serve your wurst on a bed of sauerkraut. 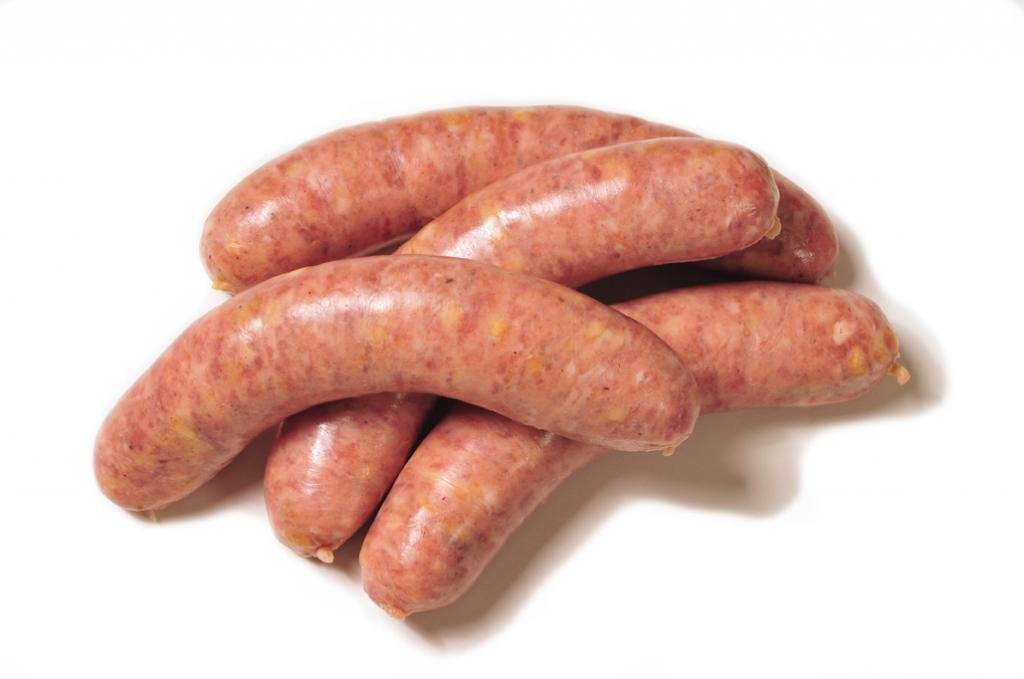 As mentioned earlier, there are over 1200 kinds of wursts. Many are regional specialties in Germany. There are a few, though, that are familiar to the US palate. Here are some well-known wursts.

Knockwurst/knackwurst: Knockwurst are short, thick wursts made of beef and pork that are highly seasoned with garlic. They have a thick casing and were originally designed to be eaten out of hand. Knockwurst roughly translates to “cracking sausage,” and the thick casing does indeed crack when you bit into it.

Bratwurst: There are many forms of bratwurst available throughout Germany and the world. They range in color from light to dark and can be either large or small. It is difficult to pin down a good definition of bratwurst, so we really must speak in generalities. Bratwurst is made of finely chopped pork that has been highly spiced with nutmeg, coriander, cardamom, celery seeds, ginger or any number of other regional variations. Bratwurst roughly translates to “finely chopped sausage,” and its texture is fairly smooth because of the fineness of the meat.

Liverwurst: a highly seasoned, spreadable cooked sausage made from pork and at least 30% liver. Liverwurst is great on a sandwich-thick slabs of liverwurst on pumpernickel with onions-it doesn’t get much better than that.

Bockwurst: a smoked wurst most often made of veal and flavored with white pepper and paprika. These are usually cooked by poaching, although they can also be grilled. They go particularly well with German-style bocks, hence the name.

Frankfurter: the wurst more commonly known to Americans as the hot dog. As with many things wurst, there is a lot of debate about the name of the wurst in the original hot dog. The frankfurter, strictly speaking, can only be called a Frankfurter if it was made in Frankfurt, Germany. Frankfurters are lightly spiced mixtures of very finely ground beef and/or pork. They are generally sold fully cooked and just need to be heated to serve.

Weisswurst: A delicate, white wurst made of veal and pork with heavy cream, white pepper, ginger and lemon. This is the traditional Oktoberfest wurst and is very tasty served with beer.

Did You Know You Can Now Buy Sausage Online

« Teaching Your Kids To Cook
A Romantic Valentine's Day Dinner »