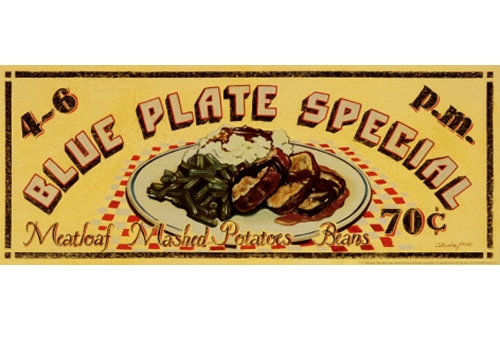 Throughout the decades of the 1920's - 1950's, a popular restaurant promotion was the "blue plate special."  Served mostly at dinners and other simple eateries, the blue plate special was a reduced cost meal consisting of some kind of meat, (beef, pork, chicken, fish etc.), with a number of vegetables side dishes.

It appears to have gleaned its name from the actual plates it was presented on.  Solid blue, or sporting a blue pattern, the plates were also divided into sections, a large one for the protein, and smaller segments for the vegetables.  Typically the items were pre-cooked and held at serving temperature.  This allowed for alacritous service and more efficient turnover.

Furthermore, the one plate meal saved time and money on dish washing.  Needless to say, the previously cooked victuals, languishing in whatever container to maintain their temperature, were usually less than inspiring.

While the "blue plate" sobriquet has all but faded from use, many modern restaurants still offer "specials."  However, daily specials are no longer the sole domain of workaday eateries but are proffered at more upscale establishments as well.  But caveat emptor!  "Special" doesn't always mean propitious for the patron.

There are a variety of reasons restaurants may offer specials.  First, specials are often used to generate business on slow days or off-peak hours, e.g., all-you-can-eat-rib-Mondays, early bird dinners, and half price appetizers during happy hour.  In these cases the "special" is not necessarily a novel item for the establishment.  Rather, it is one of the customary offerings "specialized" by the lower price.  Sometimes these specials are portents that the restaurant is circling the drain and making desperate attempts to stay afloat.

New dishes that the chef has created sometimes start off as specials.  This is simply an attempt to showcase a new concoction and test the waters.  If the newcomer is a hit, then it may be worth the expense of reprinting the menu to include it as a mainstay.

Seasonal menus often include specials composed of items that are only available, or at their peak during certain times of the year.  These can be very exciting specials, especially if you're an aficionado of the comestible in question.  Soft shell crabs, white truffles, pumpkins, spring vegetables, etc., are best savored during their prime time.

Occasionally restaurants get a good deal on a particular item.  The vendor may be overstocked, especially on something highly perishable and needs to unload it.  The savings however, may or may not be passed on to the customer.  Other times the special is an item whose availability is random.

One afternoon at a restaurant where I worked a local fisherman suddenly arrived with a cache of large sea bass just caught that morning.  Sure enough, that became one of the evening's specials.  Oh and by the way, I'll give you one guess who got the dubious honor of gutting, scaling, cleaning, and portioning all the fish.  Yeah aint that special.

A final venue by which a special is born is the most precarious for the patron, namely when the ingredients are on the brink of going stale.  Being a chef is far more than just cooking the food.

A chef must be a good businessman if he holds any hope of surviving.  Thus, any chef worth his salt closely monitors his inventory, economically utilizing older items before they spoil into red ink.  Ergo, product that is "on the turn" as we say in the restaurant world, must be used promptly.

The pitfall for the consumer is the degree to which these items have flagged.  There's a huge difference between a food that has aged but remains serviceable and one that has begun its descent.

Generally speaking, the more preeminent the establishment, the more likely they are to forgo items in the gray zone.  But the local mom & pop eatery, or any restaurant on life support, may be more willing to roll the dice.  Your blue plate special won't be the only thing turning blue.

A final issue about specials, one that can be aggravating as well as financially perilous for customers, is how the specials are presented.  I am referring to servers who verbally present a laundry list of specials, often in agonizing detail.  The patron is literally held captive, forced to feign interest and maintain perfunctory eye contact, often all for naught.

Who can recall the dizzying array of information afterwards?  The server leaves and the guests look at each other with queries such as "What was the second thing he said?"  "What did he say was on the salmon?"

Why in the world would a restaurant trying to promote its specials, advertise them in such an ephemeral manner? Maybe they're too lazy or too cheap to follow the lead of other establishments and print the specials out every day.  Or jot them down on little blackboards strewn about the facility.  Or maybe the manager is just that fatuous.  Or is he devious?

And How Much Does That Special Cost?

The only thing worse than an oratory about the specials is when the server neglects to mention their prices.  We've all fallen victims to this on occasion.  You order a special, enjoy the meal and then get sticker shock when the check arrives.  All because you failed to ask how much the special was.

(They pull this with wines as well.  If you inquire as to the wines by the glass they'll rattle off Chardonnay, Cabernet, Pinot Grigio, etc., but never the cost.  Later you discover the box-wine Chardonnay was $10 a glass.)

I am convinced that at least in a few cases, this is a deliberate ploy to sell specials that foreknowledge of the price would have prevented.  The restaurant is exploiting your fear of looking cheap by asking the price.  Or hoping you don't care or forget, thus affording them an opportunity to sell a special at an inflated price.  Be an informed consumer and have no compunction about inquiring.  Or else your special could be special for the wrong reasons.

« A Dicken's Christmas Recipe for Colcannon
What is a Food Activist »