On Saturdays, I go to the Ardmore Farmer's Market to shop with my buddy, Barbecue Bob. I typically pick up some pork product at Stoltzfus Meats because they have the freshest pork around.

This weekend I picked up some Country Style ribs that were described to me as "big pork chops that have been cut in half so they look like ribs." They were meaty, about 1 pound each.

I noticed from the cover of my June/July edition of Fine Cooking they were talking about a new way of grilling called "Sear, Braise & Glaze". I've been reading about this technique lately in some other cooking articles.

Basically you sear the meat on the grill, braise it in a Dutch oven or heavy bottomed pot and finish it on the grill as a barbecue.

There are many advantages to this somewhat new cooking technique and a couple of disadvantages but I'll write about all of them another time. For now I want to tell you how I used their recipe to braise the country style ribs in my outdoor wood burning oven for some pretty good ribs and show you how you can braise them in your oven.

Country Style Ribs - What Are They?

These ribs are really not ribs at all but pork chops cut from the blade (think shoulder) end of the loin that are then butterflied so they look like a big, meaty ribs.

There is enough fat on them so they can be braised or slow cooked barbecue style on the grill. Cuts with less fat would just get tough during a braise and are better suited to shorter, higher heat dry cooking methods.

These aren't your pick up with your fingers type of ribs that you may be used to. You more or less need a knife and fork, and if you braise them, be sure to have your spoon ready. The sauce from the braising liquids is incredible.

Did I mention they are not that expensive? I think I paid under $5.00 per pound.

Basically I followed Fine Cooking's recipe for the rub, and it was very tasty. I encourage you, however, to come up with your own brand of rubs by experimenting with different ingredients.

If you look at 100 cookbooks that have rib rub recipes, you are going to find many with similar ingredients, but they will all be a little different. I typically go with what I like and what I have on hand.

One of the key ingredients for the braise is beer. You may remember my post called Bert's Barbecue Baby Back Ribs.

This is one of my favorite and quickest ways to make barbecued ribs in a hurry by starting them in the oven and finishing them on the grill. Bert's recipe also calls for a bottle of beer. 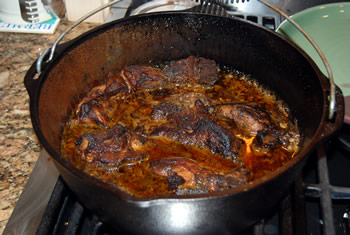 I personally like Jim Tarantino'sMarinades, Rubs, Brines, Cures & Glazes as a source for anything to do with barbecue. Jim is a master at this and his cookbook provides more suggestions and ideas than most of us will ever need.

Also, one of my favorite books on meat, Bruce Aidell and Denis Kelly's The Complete Meat Cookbook is a valuable source for everything having to do with cooking meat as well as suggestions for rubs. It turns out this recipe I'm working with was written for Fine Cooking by Bruce Aidell.

For the Braising Liquid

For the Braising Liquid