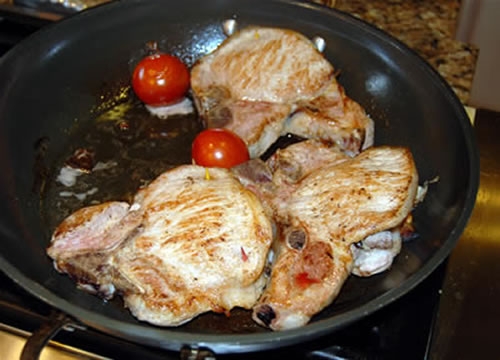 How to Prepare Stuffed Pork Chops

Stuffed pork chops are easy to make and let you combine some of your favorite ingredients. Last night I stuffed them with some apple, Maple sausage and pine nuts. The results were superb.

My buddy, Barbecue Bob and I often go to the farmer's market in Ardmore on Saturday mornings early before everyone else arrives. Our first stop is always Stoltzfus Meats where Bob picks up his weeks worth of ingredients for grilling and smoking.

The employees know him by name and this week asked him if his wife's "Smoking Ban" was over. Need I say more?

Stolzfus Meats started out in 1958 producing fresh smoked meats and over time expanded their business to include a selection of quality fresh meats but they are famous for their award winning old fashioned sweet bologna, fresh country sausage, boneless hams and bacon. And let's not forget their scrapple.

As you can see, they specialize in pork. Although they do sell beef and lamb, I go there for their fresh-butchered pork like the pork chops I stuffed last night.

The apple maple sausage I used for stuffing was also a Stoltzfus product and are great grilled by themselves served with grainy mustard and applesauce.

Stolzfus Meats sold great looking stuffed pork chops but I wanted control over what I put in mine. Most times you'll find stuffed anything has a lot of breadcrumbs.

Not that there is anything wrong with breadcrumbs, but my wife is not eating bread at this time so I left it out. Besides, you pay more to have someone else stuff them for you so why not do it yourself?

My pork chops were a little thin for stuffing but I managed. 1½ inches thick would have been easier to work with. 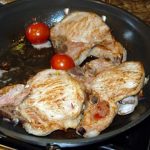 We served these chops with homemade sauerkraut from the White Oak Nursery in Strasburg, PA that was giving to me by my friend Bruce Gill. He said it is the best sauerkraut made and after tasting it, I have to agree. We served it with a 2003 Luna Vineyard Canto Red Table Wine, a Napa Valley Appellation blend of Sangiovese, Merlot, Cabernet Franc, Cabernet Sauvignon and Petite Sirah. The wine is aged in oak barrels for 20 months and has great nose (smell) of cranberry and cassis. It was quite good when first opened, but even better as it had time to breath. The list price is about $50 a bottle, but we can pick it up at our Pennsylvania state store at $23 per bottle as part of their Chairman Select program.
« Cheese Biscuits Recipe
Roasting Pumpkin Seeds »