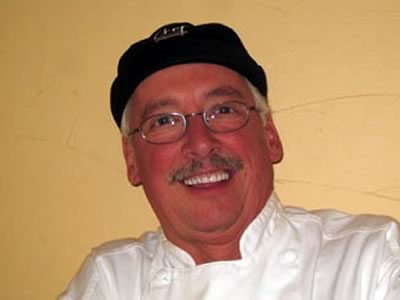 "Relax, the recipe is just a guideline! Have fun."

Chef David began his career in 1971, at the age of fourteen, as a dishwasher at a small Country Inn in New Hampshire where he grew up. After High School, he went through "basic training" at Johnson and Wales Culinary Institute in Providence, Rhode Island.

In 1983, he settled in Steamboat Springs, Colorado. He continued his education in a Resort Management program in the local branch of The Colorado Mountain College system and ultimately ended up as a part time instructor there. Certified as an instructor with AH&MA, he taught courses in Food Production, Food and Beverage Control and Purchasing for the Hospitality Industry. He also served on the Advisory Board as an industry representative to provide expertise and guidance in the development of the Resort Management Degree Program.

In 1991, David left the kitchens for a few years and became a corporate chef/sales associate, specializing in the sales of wild game and specialty foods. This opportunity allowed him to travel around the country, meeting chefs from all types of restaurants. He has taught cooking classes, been a guest chef in various parts of the country, given seminars on the benefits of serving wild game at Colorado State University, and has won numerous cooking competitions.

His credits or recipes have been acknowledged in national and regional publications, such as Cooking Light magazine, Restaurant News of the Rockies and Food Arts. And he recently had two wild game soup recipes published in Janie Hibler's cookbook, Wild about Game

I met David through a mutual friend, gave him a call and soon became fast friends. Not only does Chef David have an incredible knowledge of food and how to prepare it, he now runs Chefs4Students, a culinary grant site raising money young students thinking of going to culinary arts school.

Yes, my Dad died when I was 10 years old. My mother had to go to work and I had two younger siblings. I liked to cook and would prepare simple dishes and loved to bake prepared mixes like brownies and such.

What made you decide you would become a professional cook?

My first real job was as a dishwasher. I loved watching the chef prepare great meals. And they were beautiful on their way out of the kitchen. I thought it was an art right from the start. Of course they didn't look too much like art when they came back! To be honest I liked the waitresses too! Eventually, someone quit or didn't show for a shift and I got promoted to prep cook and that's all it took.

Where were you trained and how difficult was your training?

I went for part of a two year Culinary Arts Program at Johnson and Wales, ran out of money and didn't want a loan. So I took what I had learned and hit the streets. Years later I became a certified Instructor for the AH&MA and taught food preparation, Food Costing and Management for the Colorado Mountain College system. I enjoyed that.

Relax, the recipe is just a guideline! Have fun.develop your palette. Make mistakes.that's how you learn. The first time a cooked a Steamship Round for a Sunday Buffet, I overslept and the thing was like pot roast, so I made brown gravy and served pot roast.it was a hit! No one but the manager was any wiser. And he couldn't be mad at me because of all the compliments

When preparing to make a new dish, research it a bit. Find 3 to 5 versions of the recipe, then you'll be able to "picture it in your mouth", you'll understand the components and why they are used the way they are to obtain the final results.

So hard to chose RG. I have nearly a thousand cookbooks. Here are some choices…

The Way to Cook, Julia Child

Escoffier, The Complete Guide to the Art of Modern Cookery

If I could only have one spice to cook with other than salt, it would be peppercorns. Black, White and Green Pepper are actually berries that are processed differently and are called peppercorns. They all grow on the same vine but are harvested at different times. The green ones are harvested first and frozen, freeze-dried or pickled in a brine.

Black peppercorns are also picked unripe later in the growing stage. They are then dried and are considered to be the world's most popular spice. The last to be harvested is the white peppercorn. They are harvested when the berries turn a light shade of pink. The outer shell or husk is removed and the light or white peppercorn is revealed.

What are your two or three favorite ingredients to cook with because they work so well together?

Tough choice RG, there are so many great combinations.

What is the most underrated ingredient in your opinion and why?

Lemons and Limes don’t get enough credit: Lemons and limes compliment many foods and beverages, not just fish. A little squeeze into a chicken salad will give it a light fresh flavor that will delight your taste buds. Many chefs will add a little lemon to a sauce or soup at the end to bring it up a notch, and you'd never know it's there, but your taste buds do!

Adding a little lemon juice to your apples, peaches or blueberries before making a pie makes a big difference. Using the zest (the colored outside surface) of lemons, limes and oranges is a common practice for sauces, meats, poultry, game dishes and desserts.

I have two of every kind, drives my wife crazy! The only one that sits out on the counter all the time besides the microwave is my Food Saver vacuum sealer. What a great invention.

There are so many! There is or should be a lot of laughter in a well run kitchen. Once I worked a small country inn in New Hampshire called the Hillside Inn. The gardener's young daughter was a bus and prep girl. Her name was Wendy and she was loved by everyone and all the guests as she grew up at the Inn.

One evening before dinner was to be served, she was making the house salads. They would be arranged on a tray and carried down a short flight of stairs and kept cool in a small walk-in cooler in the basement. Off she went and didn't come back. I was busy getting everything ready and finally Wendy comes up the stairs crying. Kinda hard actually. So I rush over to see what I can do and she is apologizing up and down.

You see, an hour or two before I had made a big batch of French Onion Soup and put it in the walk-in to cool down properly. She had a serving tray in her arms and didn't see the pot of soup. She stepped right into it! She didn't even drop the salads, I would have.that soup was still pretty warm. She was crying because she thought she was going to upset the chef! Once I was confident she was not burned I just started to laugh as I pictured the look on her face when she stepped into the soup. She was OK then and came around to a good laugh.

Another time I was a chef in a high volume seafood restaurant down in West Palm Beach, Florida. We had high turnover in the dish and prep areas, so when I would hire someone, I'd make him or her peel the shells off 25 pounds of shrimp, the very first thing. You find out a lot about someone when you tell them that right after you show them how to punch the time clock.

Any way, this young dark skinned kid with bright red hair starts the job and sure enough, the shrimp are thawed and waiting for him. I could tell right from the start he wasn't happy. Now the evening is well under way and we are cranking along at about a 450 dinner pace when this kid finally walks up to the line and says "Hey Chef, why do they coat these things in plastic any ways?" He's holding up a shrimp shell! The whole line just shut down.all the cooks were laughing so hard we couldn't even see straight.

When at home, what do you like to eat?

We eat well. All top end items and I buy a lot of specialty items off the Internet. Lobster, Duck, Venison, Shrimp, Crab, Poussin, Quail, Good beef not ground beef, I grill and smoke a lot of our food.

Thanks for the interview - RG