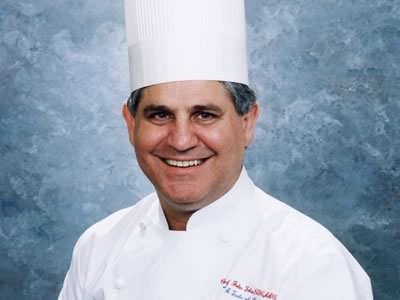 Chef John Folse is respected around the world as an authority on Cajun and Creole cuisine. His world famous restaurant, Lafitte's Landing is recognized as one of the finest in New Orleans. He is the author of The Evolution of Cajun & Creole Cuisine and Plantation Celebrations.

In 1990, Chef Folse was named the "National Chef of the Year" by the American Culinary Federation. And here's what he had to say to the Reluctant Gourmet:

Coming from a Cajun family of 8 children, we all had our duties and one of those chores was definitely cooking. My mother died when I was 8 years old and daddy got us involved in the kitchen at a very early age. I've loved cooking ever since.

Before you turned pro, did you think that's what you would be doing?

Well, I went to college and majored in education and accounting. It was after entering the hotel business in management that I realized cooking and food and beverage was what I really wanted to do.

What was it that got you into cooking?

As part of my F&B training, I had to spend time in the dining room and kitchens of our hotel property in Baton Rouge, Louisiana. It was here that I met a German chef, Fritz Blumberg, who discovered my love of cooking and creative nature and convinced me that I should enter apprenticeship under his direction at the Prince Murat Inn in Baton Rouge, 1970.

Where were you trained?

In addition to this property, I traveled extensively and eventually took over the position of Sous Chef at the Capitol House Hotel in Baton Rouge. This property was excellent for training since it had not only fine dining and casual service but the largest banqueting facilities outside of New Orleans, 3,000 seats.

How difficult was your training?

Fairly difficult, since back in those days chefs were not that keen to share information with young apprentices. In fact, they felt that if enough pressure was applied one of two things would happen. 1) you may love it just enough to take the abuse and learn the job in which case you would be considered "one who made it." 2) you would get the hell out!

Yes without a doubt! Cooking has been the catalyst and vehicle which allowed me, a Cajun from South Louisiana, to visit and create food for Popes and Presidents and open restaurants in 14 countries of the world. No other occupation imaginable would have given me this opportunity.

Don't try to be too creative, keep things simple and remember that there's only one thing that matters in cooking.....does it taste good. Use only the freshest and local ingredients first then experiment.

As we say in New Orleans Jazz, "More ain't better!" Too often, the cook tends to feel that multitudes of ingredients and techniques make for a better pot, and this simply isn't true. Just remember, the best meal one tends to remember and speaks of most is those "just like grandmaw used to make."

My collection of cast iron cookware. I think cast iron cooks best and is the least expensive cookware available. I also like my cappuccino machine!

My first day on the job, I was asked to deep fry some beautiful pre-breaded scallops for the General Manager's lunch. I had no idea that the chef and sous chef had taken round pieces of butter and rolled them in bread crumbs and placed them in the refrigerator. When the GM sat down they yelled, "Hey John, first big job.....impress the GM fry those scallops in a hurry!" Imagine the outcome when the scallops hit the hot oil only to disappear in front of my eyes. BASTARDS!

Local ingredients, fresh and in season.

Thanks for the interview Chef Folse