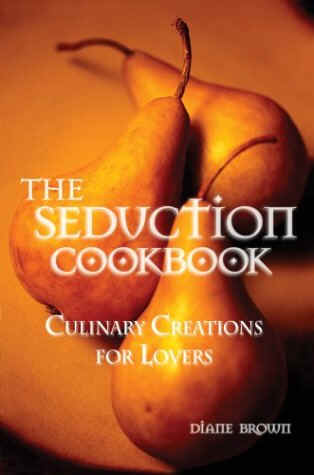 When I received Diane's email asking if I would like to review her cookbook, The Seduction Cookbook, I immediately looked it up at Amazon to see if it was going to make me blush. Although the cover is very sexy, the contents of the book are for anyone who wants to learn more about cooking for their mate.

When we spoke on the phone about doing this interview, I asked Diane if she would send me a sample recipe I could post to my viewers. She was gracious enough to send me her Wild Wild Mushroom Pasta for Two recipe.

Diane Brown published The Seduction Cookbook: Culinary Creations for Lovers in January 2004. She is a restaurant industry professional and proprietor of Intimate Catering. She teaches aphrodisiac cooking classes at Sur La Table and The Learning Annex.

She studied food journalism at UCLA and has published recipes in Gourmet, Sunset, Bon Appetit and Love magazines. Her cooking has been featured on shows as The Other Half with Dick Clark and Smart Woman/Chef's Corner, an Ivanhoe Broadcast News production.

Q: How did you get into romantic cooking?

Growing up, my mother's domain was the kitchen. She was an amazing all-American cook, but she was very territorial. I didn't try to cook until I moved out for college and then attempted to cook for my Italian boyfriend. When he practically spit the food back at me, I knew I needed help. I called upon Mom, as well as every cooking resource I could find.

Q: What made you decide to write a cookbook?

After I had developed countless recipes for two, I started a catering company where I cooked and served romantic dinners for two. I had so much fun making so many couples happy with food, I wanted to be able to share "seduction cooking" with everyone.

Q: Why do you think food and love have such a connection?

You know many great chefs. Haven't you found that they are driven by passion? Besides, there's no denying that a meal lovingly prepared and properly presented with just the right ambience can precipitate the most romantic encounters.

My silicone 10" wire whisk…couldn't make perfect whipped cream or chocolate soufflé without it!

Q: What is your best cooking tip for someone who wants to romance his or her mate with food?

Use the K.I.S.S. method: Keep It Simple and Sexy. Don't make an elaborate menu that will keep you buried in the kitchen instead of enjoying your date. Prepare an easy recipe that has major flavors, intense fragrances and striking visuals. Food should appeal to all of our senses. Also, invite your date into the kitchen; feeding him or her a taste is very stimulating!

Q: What is your favorite aphrodisiac food to cook with?

I'm into "mood foods" right now, foods with proven chemical components that affect our sense of well-being. For example, oysters contain zinc, which increases testosterone levels. Legumes like lentils and black beans have plenty of protein, vitamin B6 and zinc.

Garbanzo beans are cited by The Perfumed Garden to give "a man the strength to pleasure a thousand women." Of course, Chocolate carries a romantic association to all lovers, perhaps because of the effects on the brain of a naturally occurring substance called phenylethylamine PEA. PEA can enhance endorphin levels, increase libido and act as a natural antidepressant.

An unknown food for love is pasta: cravings for it may be a subconscious attempt to raise serotonin levels, the brain chemical responsible for happy moods.