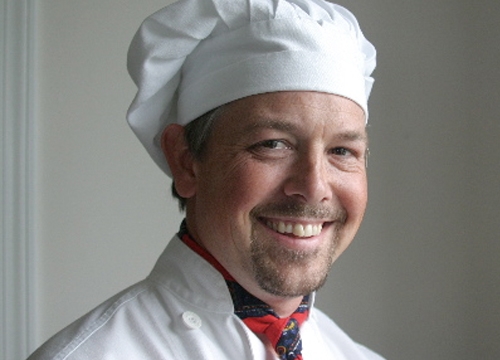 "Working in a kitchen is full of surprise everyday, and that's why I love it! ." - Martin Laprise

If your daughter (or son) is thinking of going to culinary arts school anytime soon, you are going to want to read Chef Martin Laprise's interview and then buy his book, My Daughter Wants to Be A Chef.

When his daughter approached him about becoming a chef, Martin wanted to do something to help her make the right decision so he wrote his book to give her the tools necessary to find the right career path.

He says, " So many times good cooks are wasting away a big part of their culinary career in the wrong concept".

Chef Laprise's book describes 39 different jobs available to professional cooks, 24 of them he himself worked during his career. He says, "The biggest lesson that comes out of this book is simply that so many times people start on a career path without knowing enough about that trade. "

After reading My Daughter Wants to Be A Chef, you will be left with a sense of having already worked as a chef. It's an honest professional view from inside kitchen walls, a compilation of facts and stories that happen to cooks and chefs everyday all over the world. Here's Chef Laprise's interview:

At 19 years old, I moved out of my parents house and lived on my own paying my own bills doing all kinds of stupid job with no future. After washing dishes in a pub for a few days. I fell in love with the energy, the noise and the smell in the kitchen.

Who inspired you most as a young cook What Did You Learn From Them?

A French chef named Bruno Manlhiot. He was and probably still is a crazy chef who would spend hours on small little garnishes which would make the plate really stand out!

Did you go to culinary school and if so where?

Quebec, Canada where I am from.

How did you decide on that particular school?

A FREE trade school. NO reputation at all, just very conveniently placed in my home town.  In 1985, we did not look for a reputation in a school, instead we looked for a good job coming out of school so we could really learn our trade.

Did you compare it to other schools?

I did compare, but the best school we had in Quebec at the time was an hour bus ride away. I was already working in a pub 40 hours, so I needed to stay close to pay the bills.

What were you looking for in a culinary arts school?

Later in life I went for the money instead of learning, and now I am just having a blast helping people by doing private parties. It took me 20 years to find my calling, but now I am set until I retire. I make a good living AND I learn a lot too. My company allowed me to write a book called My Daughter Wants to Be A Chef aimed at helping young up and coming cooks and chefs.

What advise would you give a high school student interested in going to culinary school?

Go try it out first, and that goes for any career. Don't EVER start culinary school without having worked in a restaurant first. Do dishes, wash the floor, even just ask to observe the kitchen during service time. It may scare you away, or it may re-enforce your desire to cook for a living - either way, you should find that out before spending money and time!

Is that the same advise you would give an adult starting a second career? If not, what would be different?

Absolutely! As a general rule, and I really mean general, the hospitality industry is not the place to get rich. A chef with 15 years experience can make $45,000 where a plumber with 15 years should be making in the upward of $60,000. So as an adult who has already a family and responsibilities, money is a big part of that decision.

How were you trained and what was the experience like?

I did European training. Out of 13 classmates, 3 are still cooking for a living. I went to school during the day and worked at night. My teacher was Julian Letellier, one funky chef who went on to become very popular in all Quebec local TV networks. I liked school, but I could not wait until it was over as I was getting tired to work 40 hours and study 40 hours each week.

What was you first job as a professional in the restaurant industry and what was that like?

My first cooking job was in a very reputable restaurant that had been opened for 29 years. I was the last cook in and I had to fetch coffees to all 11 other cooks and chefs everyday. You know what, I hated it, but it did teach me to learn and push hard so I would move up the ranks and stop having to be everyone's B.

What are the top 3 or 4 traits someone should have to succeed as a chef?

What is your favorite style of cooking and what about that style most appeals to you?

Italian, Greek and French.   Fresh and simple is the word. I like to cook with 3 to 5 ingredients at a time.

What are your two or three favorite ingredients to cook with because they work so well together?

Fresh tarragon, because most people have never tasted fresh tarragon. Most people use dried tarragon that they bought when they got married and they don't think that it taste that great.  So it is very easy to hit it out of the park once I show up with fresh stuff.

What is the most underrated ingredient in your opinion?

Chocolate! People see chocolate as dessert, but in reality its the way to a women's heart. It is extremely powerful and if you master that ingredient you will have a very busy love live.

How about the time when one of my cook had a pan of oil on fire and instead of trying to put it off, he was running around the kitchen with the pan in his hand saying fire, fire almost burning three other cooks.

Or or how about the time when my cooks played a practical joke on me and filled up my tool box with water and froze the whole thing over night!

Spaghetti meat balls is my favorite meal to eat. At home I like to eat any simple, healthy and chemical free foods.

What is your signature dish or your favorite recipe?

Chocolate whip cream - You can use this for so many things!

Slowly melt 9 oz to 10 oz of good chocolate in the microwave.

If you have any comments about cooking or managing a restaurant, please
do so here.

Thank you and I hope you enjoyed the interview - RG