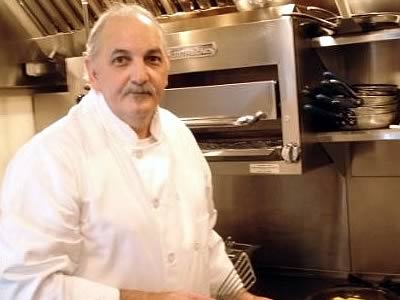 Once at a wedding in the Berkshires of Massachusetts, I befriended a chef by the name of Ricco DeLuca. Ricco graduated high school the same year I did and upon graduation went to cooking school where I went to college.

He's spent the past 30 years working in restaurants while playing in the stock market as a hobby while I spent a good portion of those years working on Wall Street and cooking as a hobby. Minutes after meeting we knew there was a connection and became friends.

Raised by an Italian family of cooks, Ricco has forgotten more about cooking than I ever hope to learn. Years ago, I spent an incredible weekend in Massachusetts where Ricco was cooking and watched him dazzle me with his cooking skills. It was a learning experience that I'll never forget.

Now that I am back on the east coast, I call him more often to say hello, talk about food and always end up asking for a recipe or technique. He happily takes the time to explain in detail just how a particular dish should be prepared. I've even been able to convince him to fax me some of his favorite recipes including Aglio-Olio (Garlic and Oil)

Food is a great way to spend time with the people you love, its fun and interesting and you learn every time you cook so keep plugging and keep it simple. - Chef Ricco DeLuca

Growing up in a traditional Italian family, Chef Riccardo DeLuca's life revolved around food. For him, becoming was a Chef was not so much a choice as a calling. He received his first lessons at his mother- Antonia DeLuca's kitchen.

Herself an accomplished Chef, Mrs. DeLuca would eventually hire Chef Riccardo to work at her restaurants in the Berkshires and later in California. Ricco's mom also cooked for Frank Sinatra and his family for many years.

His first job, at the age of twelve, was at the Pittsfield Rye Bakery. Shortly thereafter, he was sent to work at East Side Cafe in Pittsfield.

He graduated from Taconic High School with a major in Culinary Arts and won a scholarship the the prestigious Le Cordon Bleu in France. Chef Ricco, as he likes to be called, had to defer his acceptance on account of the ongoing Vietnam war in case he was to be drafted.

He remained at 'DeLuca's' – the restaurant owned by his mother and was worked, he said, “harder than I'd ever worked before.”

After owning and operating several successful restaurants, Chef Ricco went on to an eleven-year stint as Executive Chef at the Five Star Michelin Rated kitchen at Seven Hills Resorts in Lenox, Ma where he can count among his fans: Yo-Yo Ma, Dave Brubeck and Leonard Bernstein to name a few.

He was Executive Chef at the Five Star Michelin Rated kitchen at Spaghetti Factory. It was during the late seventies and early eighties that Chef Ricco became interested in concept of 'farm-to-table' dining. To his effect, he was one of the first in the Northeast to own and operate a fully organic farm and restaurant- 'Wild Harvest'.

An avid traveler and connoisseur of world cuisines, Chef Ricco has traveled extensively in North and South America. But it was trip to India and Singapore that really captured his attention.

Between 2004-2007, he spent time in the southern city of Thiruvananthapuram- a city renowned for its traditions and its food. Given the traditional nature of the society, Chef Ricco had to tailor the Italian menu for the Indian taste buds.

Now that I am back on the East Coast and Ricco is living just outside NYC, I'm hoping we get to finally spend some time together and work on some new recipes. Let's hope so!