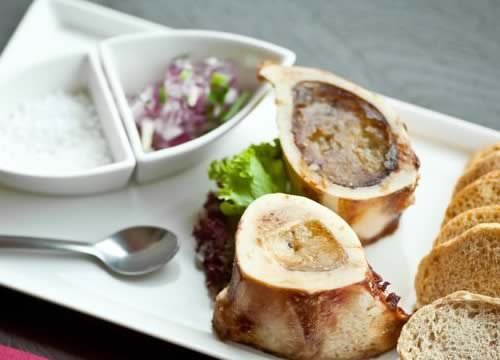 You live in eastern Africa, in and around modern day Tanzania.  There’s one small problem though.  You’re kinda dumb.  It’s not your fault.  Your brain isn’t much larger than an ape’s.  You’ve been eating too much vegetable matter.  And while a modern day cardiologist or food neurotic might applaud you, the veggies just aren’t cutting it.

You’re never going to build the pyramids, find a cure for tuberculosis, or land on the moon on a diet of leaves and berries.  In order for your brain to grow you need meat, or at least some form of animal protein and fat.

But there’s another problem.  You haven’t quite figured out yet how to construct effective weapons and coordinate efficient hunts with your fellow hominids.  Again, you’re not that bright to begin with.  But you do know how to scavenge and are beginning to employ rudimentary stone tools.

You’ve seen vultures drop bones from the sky to break them open and feast on what lurked inside.  Early hominid see, early hominid do. Thus, you can find a carcass and use your rocks to crack open the bones.  Inside is the luxurious goodness that brain development is made of:  bone marrow.

What is Bone Marrow?

Bone marrow is rich in fat and protein and other elements less common in the vegetable matter available to you.  Caloric and nutrient dense, and more importantly, requiring far less energy to digest than roughage, a diet rich in bone marrow allows metabolic resources to be allocated elsewhere, namely developing a larger brain.  Gradually you and your kind will evolve into Homo habilis and other similar species that will eventually give rise to Homo sapiens, i.e., modern day humans.

Marrow is the soft, gelatinous tissue found in the cavities of bones.  It plays an important role in red and white blood cell formation and the immune system.  It is quite fatty, but most of the fat is monounsaturated fat, which like polyunsaturated fat helps to reduce cholesterol.

Finding Bone Marrow in Your Market

Marrow bones, yet another exquisite victual more popular in Europe than palate-challenged America, can still be found in most major US supermarkets.  I prefer specimens cut into approximately two-inch lengths for ease of cooking and marrow removal.  If your market only has longer bones, simply ask the butcher to cut them.

Like meat, keep them in the fridge only a day or two, or else freeze them.  Prior to cooking rinse them in cold water.  Some chefs prefer soaking them for a few hours in salt water to draw out any impurities.  Should your recipe call for cooking the marrow sans bone, soaking is required to soften it and thus facilitate its extraction.  Simply pop it out with your finger after its protracted salt water bath.

Marrow bones are frequently enlisted to make stock.  Cooked marrow can be whisked into soups, risotto or sauces to enrich them.  Bordelaise sauce, the classic red-wine-infused brown sauce is finished with bone marrow.

Marrow can be used to make what the French call a salpicon, a mixture of diced ingredients which is then employed as a stuffing or garnish.  Marrow-based stuffing can be utilized in dumplings, artichokes, cardoons, (a European artichoke relative), and savory pastries such as a bouchée, a small round puff pastry pouch that encases a filling.

Cooked marrow can be sliced and served as a garnish with meat dishes.  And where would osso buco be without the succulent marrow?  The highlight of the dish is scooping out the marrow, (sometimes with a special marrow spoon), and savoring it with the meat.

Bone marrow is cooked either by poaching or roasting.  Roasting of course will produce the deepest and most intense flavor.  My favorite way of enjoying bone marrow is perhaps the simplest:  roasting it and spreading it on crostini as in the recipe below.  I haven’t included specific amounts.

This recipe needs no precision.  Simply make as much as you think you’ll need.  A rough guideline is one to two pieces of bone per person as a hors d’oeuvre.