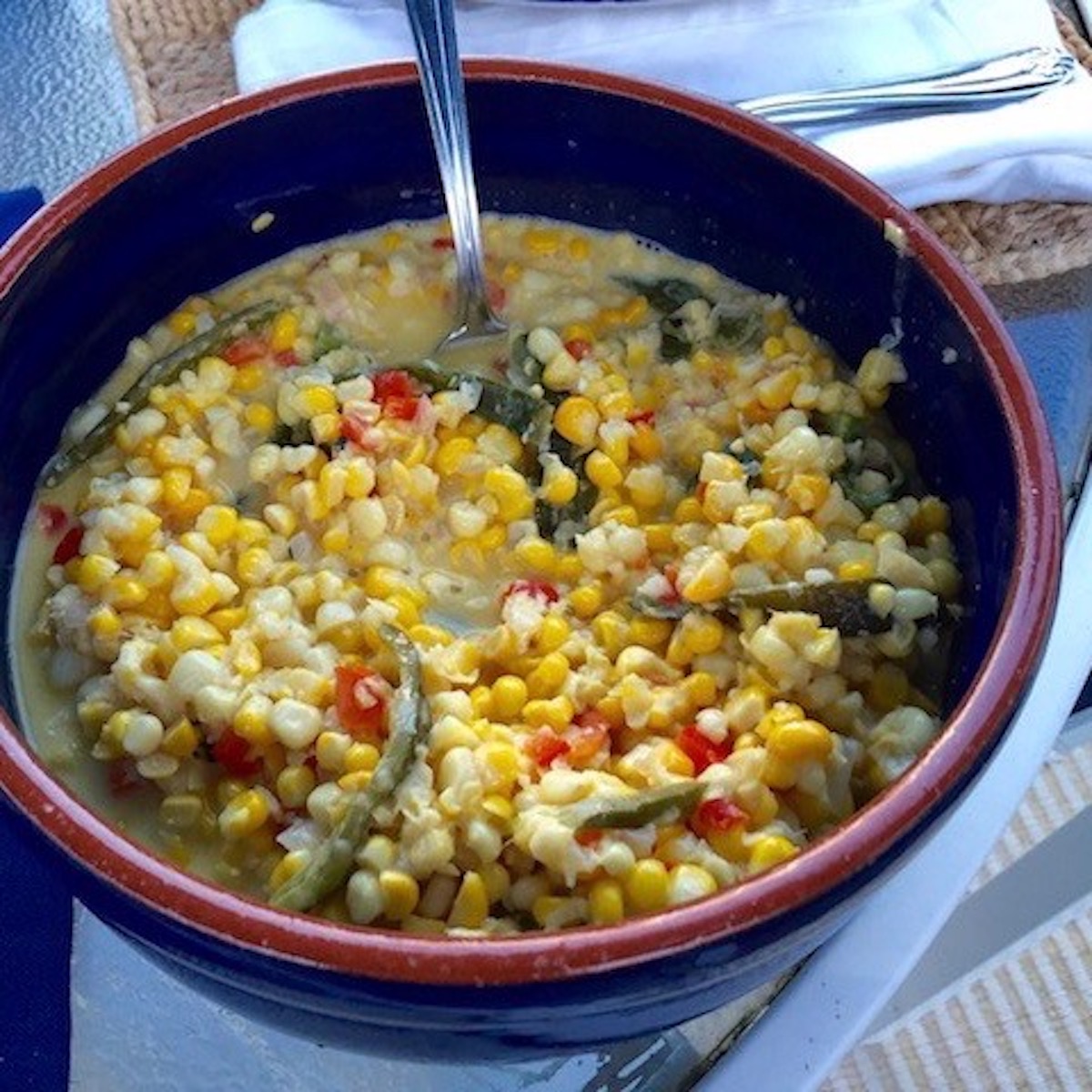 I just came home from a week vacation with my wife and daughters that started in Maine and finished up in the Hamptons of New York. It was a great time filled with wonderful sites, plenty of great food, great visits with good friends, and a few tasty adult beverages along the way.

There's lots to share including a future post by my wife on her journey quest to find the best lobster roll in New England. For now, though, I want to share with you one of the best side dishes from the trip and that is this creamy corn with poblano peppers dish.

The recipe is a favorite of my friend Karen who spends time on the weekends in Hampton Bays, New York. They live right on the bay so our dinners for the past few nights have not only been exceptional in taste but even more exceptional in scenery.

The recipe Karen introduced me to is not new. She said it came from Chef David Tanis who writes the weekly City Kitchen column for the New York Times.

I searched for it on the Internet and it looks like it was published back in August of 2011. Sorry I missed it.

The original name for this recipe is Creamy Stove-top Corn with Poblano Chiles and it has a bit of spice to it but the spice doesn't come from the poblano which is a somewhat mild pepper that originated in Puebla, Mexico. When dried, it is called ancho or chile ancho.

What gives this dish its heat is the optional cayenne pepper or jalapeño pepper you can add to give it that zing. Here's where that expression, "to taste", really has meaning.

What I think gave this dish its exceptional flavors are the extremely fresh Long Island corn and the just roasted poblano chiles. Having fresh, seasonal corn will give any corn recipe a big head start.

Roasting peppers can be done on top of the stove or in the oven. Either way works fine.

Oh and did I mention this recipe uses creme fraiche?. You can add creme fraiche to just about any dish and make it taste better.

To roast peppers in the oven - cut them in half lengthwise, clean out the seeds & membranes and place cut side down onto a baking sheet that has been lined with parchment paper. Pre-heat the oven to 425°F and when hot, add the peppers and roast for about 20 minutes until the skins wrinkle and the peppers begin to char.

Be careful not to let them smoke or you may set off your smoke alarm. When the peppers are done, I like to toss them into a paper bag and close them up for a few minutes. This way seems to make it easier to remove the skin.

To roast the peppers on a direct heat source like the stove-top or your outdoor grill - check out my post called How to Roast Peppers.