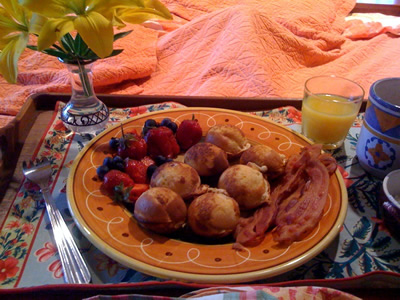 Here's me this morning in bed on Father's Day with a meal prepared by my youngest daughter (9) with some help from her mother. Here's what's on their menu:

What a treat for me and my daughter was thrilled she could be involved preparing this meal. Like I always say, "Kids Can Cook."

Doesn't get any better than this. Here's a little history of how Father's Day was started sent to me from a friend back in Park City, Utah. Hope you enjoy it.

The idea for an official Father's Day celebration came to a married daughter, seated in a church in Spokane, Washington, attentive to a Sunday sermon on Mother's Day in 1910-two years after the first Mother's Day observance in West Virginia.

The daughter was Mrs. Sonora Smart Dodd. During the sermon, which extolled maternal sacrifices made for children, Mrs. Dodd realized that in her own family it had been her father, William Jackson Smart, a Civil War veteran, who had sacrificed-raising herself and five sons alone, following the early death of his wife in childbirth. For Mrs. Dodd, the hardships her father had endured on their eastern Washington farm called to mind the unsung feats of fathers everywhere.

Her proposed local Father's Day celebration received strong support from the town's ministers and members of the Spokane YMCA. The date suggested for the festivities, June 5th, Mrs. Dodd's father's birthdays were three weeks away-had to be moved back to the nineteenth when ministers claimed they need extra time to prepare sermons on such a new subject as Father.

Newspapers across the country, already endorsing the need for a national Mother's Day, carried stories about the unique Spokane observance. Interest in Father's Day increased. Among the first notables to support Mrs. Dodd's idea nationally was the orator and political leader William Jennings Bryan, who also backed Mother's Day. Believing that fathers must not be slighted, he wrote to Mrs. Dodd, "too much emphasis cannot be placed upon the relation between parent and child."

Father's Day, however, was not so quickly accepted as Mother's Day. Members of the all-male Congress felt that a move to proclaim the day official might be interpreted as a self-congratulatory pat on the back.

In 1916, President Woodrow Wilson and his family personally observed the day. And in 1924, President Calvin Coolidge recommended that states, if they wished, should hold their own Father's Day observances. He wrote to the nation's governors that "the widespread observance of this occasion is calculated to establish more intimate relations between fathers and their children, and also to impress upon fathers the full measure of their obligations."

Many people attempted to secure official recognition for Father's Day. One of the most notable efforts was made in 1957, by Senator Margaret Chase Smith, who wrote forcefully to Congress that "Either we honor both our parents, mother and father, or let us desist from honoring either one. But to single out just one of our two parents and omit the other is the most grievous insult imaginable."

Eventually, in 1972-sixty-two years after it was proposed-Father's Day was permanently established by President Richard Nixon. Historians seeking an ancient precedent for an official Father's Day observance have come up with only one: The Romans, every February, honored fathers-but only those deceased.

In America today, Father's Day is the fifth-largest card-sending occasion, with about 85 million greeting cards exchanged.