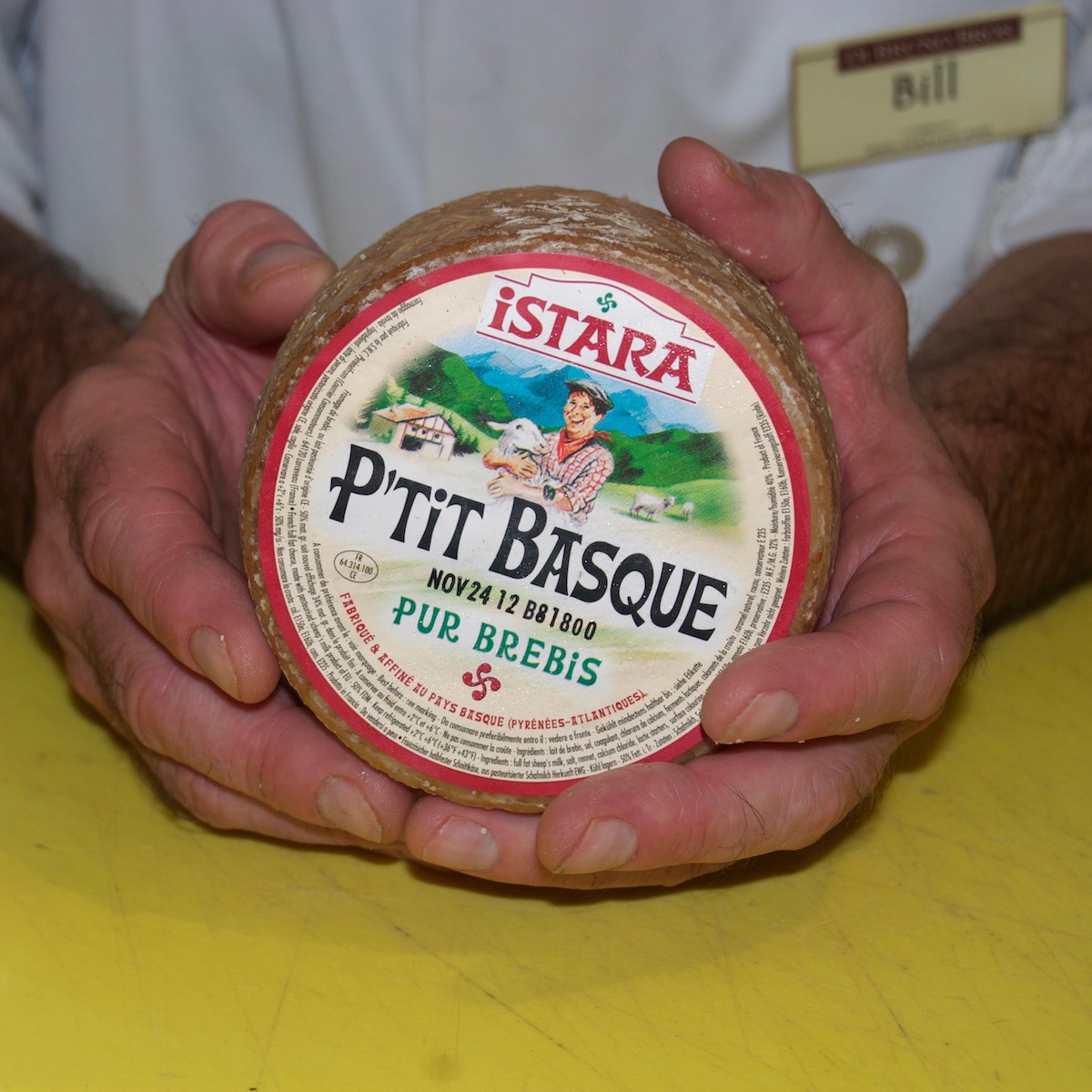 Most visits to our local Ardmore Farmer's Market, I stop by Cheeseman Jack's booth to talk about cheese, learn by tasting some cheese I've never had before and purchasing some to bring home to my wife and family. Recently I had the opportunity to try Petit Basque, a wonderful sheep's milk cheese that is mild enough even for my kids.

Petit Basque is an pasteurized, uncooked hard sheep's milk cheese produced in the Pyrenees Mountains, the mountains that form the border between France and Spain.

A lot of the great cheeses of the world have been around for hundreds of years.  Interestingly, although Petit Basque (sometimes spelled P'tit Basque) is made using traditional methods, it is a new cheese, having first been produced in 1997 by the large French dairy corporation Lactalis.

If you think you've never heard of Lactalis, think again.  Ever heard of Sorrento, President or Rondele cheese brands?  All of these brands are under the Lactalis umbrella.

Lactalis most likely wanted to produce a more accessible sheep milk cheese, one that would appeal to a broader segment of the American market"”almost half of the Petit Basque produced is marketed in the United States.

Petit Basque is made in the Pyrenees Mountains using the same techniques that local shepherds used hundreds of years ago. This "fromage de brebis" or sheep cheese was made from pure sheep's milk the farmers put aside while milking their ewes.

Two other famous sheep's milk cheeses from the area are Ossau Iraty and Idiazabal.

Petit Basque is comprised of 45% fat and has a rich, buttery yellow color.  The cheese is made from curds from uncooked, pasteurized ewe's milk.

Once pressed into molds and dried, it is brined for two hours and then cold aged for 70 days before being either waxed or covered in thin plastic to prevent mold. The small cylindrical shaped cheese each weigh about 1¼ to 1½ pounds.

The aroma is slightly nutty with some caramel notes.  Biting into the cheese, some have described it as having a smooth taffy-like feel in the mouth.

What to Serve With

Since Petit Basque is a relatively mild sheep milk cheese, it is a good one to start with if you are unfamiliar with sheep milk cheeses.  The flavor is mildly "sheepy," nutty and somewhat fruity.

It would be lovely on a fruit and cheese platter, especially with stone fruit such as peaches, apricots or even cherries.  It can also be served on some French bread with ham and tomato or on serving board with cured meats, olives and paté.

I typically serve cheese with whatever wine I'm drinking but I have read Petit Basque goes well with most red wines including Beajolais, Merlot and Viogner.

Where To Find Petit Basque

Try your local supermarket or cheese shop and I think I've seen it at Costco too.