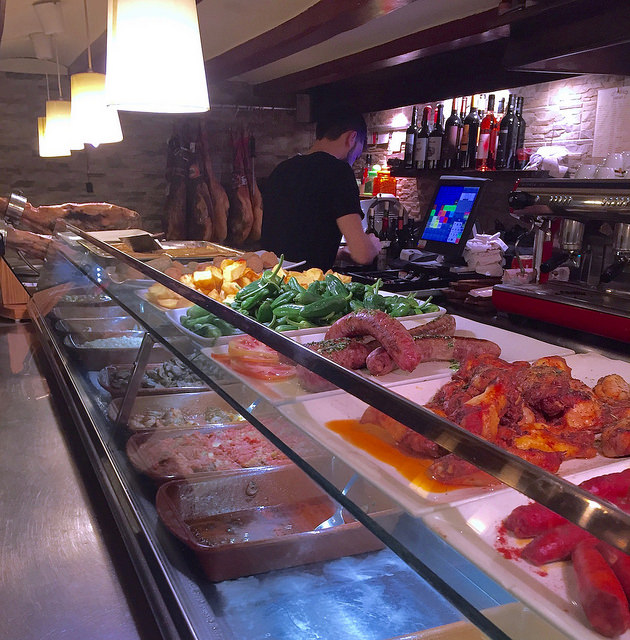 In Barcelona, It's All About Tapas

I’m just back from a trip to northern Spain that included stays in Barcelona, San Sebastian, Logrono in the Rioja region and Madrid. All I can say is wow, these people know how to eat, drink wine and live. It was one of the greatest food adventures of my life!

We started out in Barcelona where we spent two glorious nights of eating tapas and drinking regional wines. The first place was a little bit touristy but the second night was not, thanks to our incredibly knowledgeable guide, Jessica, who took us to a place in the Gothic section of Barcelona down some tiny street that would be hard to find again. I’m sure we were the only Americans dining there that night.

Depending where you are in Spain, tapas may mean different things to different people. I think of tapas as small plates served in tapas restaurants but we also found tapas served in bars and cafes.

What was served depended on what city you were in except for ham, which we found in every town and city we visited. And I'm not talking about sliced ham we think of here in the United States but Jamón serrano, translated as ham from the sierra, or mountains.

Everywhere we went we found people enjoying tapas and usually with a beer or glass of wine. I've read that it is so much a part of the Spanish culture they use the "verb tapear which means to go and eat tapas".

Here’s a menu from the first night’s restaurant Taller de Tapas. You can see they attract English speaking tourists like us because the menu is in Spanish, English and I believe that is Catalan, the language many speak in Barcelona.

What’s great about looking at this menu is seeing some of the classic tapas choices we found throughout our trip to northern Spain. I’ve included some photos of a few of the dishes we shared among the six of us.

Because Barcelona is on the Mediterranean coast, there is a lot of seafood available. When I write about the famous La Boqueria market, you’ll see more of what I mean.

My wife and I love Montsant wines from the southern region of Spain in the province of Catalonia and located just south of the more famous Priorat wine region.  We found this 2009 Sons from the Celler Mas d’en Canonge winery that was a combination of Grenach, Carignan and Tempranillo. It was inexpensive and delicious.

The next night Jessica took us to this tiny tapas restaurant called O'Toxo 3 Hermanos in the Gothic section of town.  We ordered some more classic tapas dishes along with a bottle of 2012 Portia Crianza wine from the Ribera del Duero region and made from Tempranillo grapes.

Some of the tapas we sampled included:

After dinner we found our way to the best gelato store on Las Ramblas called Amorino Ramblas. Here they serve their large variety of flavors as flowers in a cone. Here’s a sample of what we enjoyed.

I’ll share some more meals from the trip in the next few days.