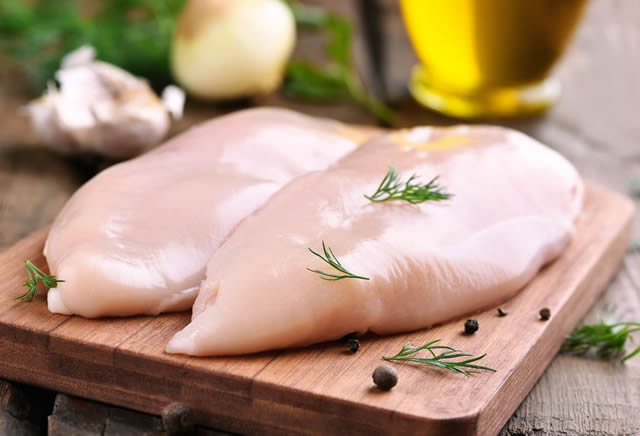 I just read an article in the Wall Street Journal Business section about a new condition with poultry called "Woody Breast." It seems we are growing our chickens much larger and way faster than ever before.

The article shows a chart describing a broiler chicken's average weight went from about 2.5 pounds in 1925 to 6.4 pounds in 2015. What's even crazier is how fast it now takes for a chicken to gain a pound compared to around 1925. Would you believe 50 days per pound back then compared to just 7.7 days in 2015?

What Are Woody Breasts?

Chickens are so popular now that producers have been breeding them to grow larger and faster and have more breast meat. According to this article, today's broiler chickens now have breast fillets that are "heavier than the entire bird just a few decades ago. "

If you've ever eaten a boneless chicken breast that was harder to chew and much more elastic than you'd expect, it is likely it has this woody breast condition. Another way the meat is described is as "gummy."

These affected birds are "laced with hard fibers" that are not dangerous for consumption; they make the chicken breast more challenging to eat and less tasty. According to one of the experts quoted in the article, only 5% to 10% of boneless chicken breast fillets sold worldwide are affected. To me, that means if you buy a lot of chicken, there's a good chance you'll purchase one of them more often than you think.

The problem seems to be not from how large they grow chickens today, although I think that is a problem in itself, but how fast they are growing them. From 50 days to 7.7 days to grow a pound, something sounds strange about that. So what the heck are they doing?

What Can Be Done?

The poultry industry is concerned -- and they should be. It turns out one producer started getting complaints from their restaurant and retail customers about woody breasts and now has their workers test every piece of boneless skinless breasts for what feels like knots in the meat.

If they find these knots, the breast meat is pulled from the line and "sold at a discount and then further processed or ground" for other uses. Great, now I'll find it in my chicken sausages.

The real problem is they don't know what's causing this "woody breast" condition. Is it how large the chickens are getting? How fast they are growing? Nutrition? Hen-house conditions? Breeds or lack of diversity in breeding?

They can't tell if a chicken has the condition until it is killed, portioned, and deboned, so the producers don't know while the bird is alive. It just may be the breeders have bred these birds to their max size and fastest growth rate. Maybe it's time to take it back a notch or two and see what happens.

What Can We Do About Woody Breasts?

Not much, I suppose. We have to hope the industry figures out why this is happening and does the right thing to fix it. I would encourage anyone who buys chicken breasts at their local market and comes across these conditions to report it to the store they bought it and request a refund. Not fun to do, but it may get the markets to push back on the producers.

You can also try buying meat from local farmers at your farmer's markets. However, free-range birds might not have the same conditions as the mass-produced chickens you purchase at the supermarket.

How about buying smaller birds? The article did not discuss this idea, but it may just be true this condition doesn't affect 6 to 7-pound chickens as it does the ten-pounders.

I just wanted to let you know about this situation I read about a few days ago. If you want to read the article in the Wall Street Journal by Kelsey Gee, click here.

If you like this post and want to see me write more about what's happening in the food industry, please drop in a comment below. Thanks