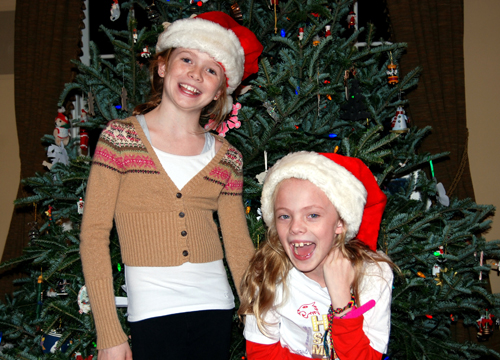 This is not food related so please excuse the inclusion but my two daughters were just interviewed by the Philadelphia Daily News on their upcoming visit to Disney’s production of High School Musical. Just 7 & 9 and they are already getting more print than their father. I’m excited to see their names in print, I only wish they mentioned their dear old dad and The Reluctant Gourmet website although I’m sure I would have been edited out.

The article was written by Jonathan Takiff, a staff writer at the Daily News who is more likely to be interviewing rock stars than young girls, but lets face it, High School Musical is hot. I’ve seen the first one and can’t wait to see the sequel later this summer. Jonathan is a friend of ours and heard we are taking the girls to see the stage production so he set up the interview with my wife. The girls were a little nervous, but I think they did a great job.

I’ll be interested to see if Jonathan interviews them after they see Disney’s new movie, Ratatouille.  Hey, maybe he’ll interview me. I can’t wait to see that one too.

So here’s Jonathan’s article about High School Musical that will fill you in on the current projects plus what to expect in the future. There’s even some insider information for all you parents with kids who are fans:

By JONATHAN TAKIFF
Philadelphia Daily News
LEAVE IT TO the Disney organization to pave a future for musical theater – and make a mint at the same time.

Diz done it with what theatrical script writer David Simpatico calls a “nice big cupcake” of a pop-rock confection, “High School Musical.” The property has sparked millions of youngsters to sing and dance along in their living rooms and on stages. It also has evolved into a multifaceted commercial juggernaut, sparking the biggest-selling CD of 2006, a huge DVD smash, and a hot arena touring concert production – with lots more in the pipeline.

As a bright auguring for the future of student theater and the Broadway stage, more than 1,500 school and community theater groups already have licensed the rights to put on their own “High School Musical.”

Among this coming fall and winter’s batch will be local productions at St. Hubert Catholic High School and Chestnut Hill Academy. “A show is considered hugely popular if it earns 400 or 500 performance licenses a year,” said Steve Fickinger, vice president of Disney Theatrical Productions. “We’ve done triple that, in just eight months.” On Wednesday, in a curious reversal of form, fans can greet “HSM” as a legitimate stage musical, too, pumped up with a bright, all-Equity cast at the Academy of Music.

For the uninitiated, “High School Musical” debuted on the Disney Channel in January 2006 as a made-for-TV movie. The song- and dance-filled show-within-a-show tells the tale of two unlikely student performers – a science whiz “brainiac” named Gabriella and a “jock” named Troy – who overcome peer pressure and spiteful rivals to win the leads in their school musical.

Gabriella and Troy also overcome their cliques and differences to click romantically.

“Like most Disney films, it’s aspiration,” said Fickinger. “It promotes the message of ‘You can be whatever you want to be be.’ ”

The TV movie was on the network for months, and the ratings went up with every rerun. To freshen the property, Disney offered a karaoke version with on-screen lyrics, then another treatment with dance instructions during the commercial breaks. There also was a pop-up video version.

“We’ve watched the movie in the backseat of the car 5 million times and we still love it,” said 9-year-old Nell Jones, also speaking for her 7-year-old sister, Maddie, at their home in a Philadelphia suburb.

“We wear headphones so we don’t drive our parents crazy. We also sing the songs on the school bus. And even my counselors at camp, who’re in their 20s, know all the songs.”

Maddie said she got the junior-novel version for her birthday, adding, “and I’ve read most of it.”

Nell chimed in, “We also have the piano book [score], and I can play a short piece of ‘We’re All in This Together.’ ”

Both girls have admired, though not yet acquired, “HSM”-inspired casual clothing spotted at The Limited Too.

And, of late, the sisters have been reading in a glossy fanzine about “High School Musical 2,” the first of two planned film sequels that premieres Aug. 17 on the Disney Channel (more on that, shortly).

The Jones girls didn’t see the concert version when it played last fall at the Wachovia Center “with all but one of the original cast members, Zac Efron, who was doing ‘Hairspray’ [the soon-to-open movie],” Maddie noted authoritatively.

They’ve also heard “a little” about the ice show version, which will be touring the land with two companies, beginning in September, and lands on the ice at the Wachovia Center at the end of December. They didn’t know about the video games, coming out for Nintendo Wii and DS and Sony PlayStation 2 in August.

The kids are definitely looking forward to seeing the stage version with their parents, Meg and Gary, who also find it “wholesome fun.”

The girls’ enthusiasm barely even flickered when this party-pooping reporter clued them this cast would be entirely different: “I don’t think that’s right,” Maddie protested, “but even if it is, we’ll still like it.”

“There has been some confusion about the nature of the new stage show, relative to the other projects,” said Fickinger, speaking from rehearsals in Detroit, where “HSM” opened last week. Philadelphia will host the show’s second of a planned 60 U.S. stops.

“The arena concert production was a lot like ‘American Idol Live,’ ” he explained. “You saw those people you’d seen on TV, singing songs from the show and a few songs from their own album projects. There was no book, no script, just songs and choreography.”

How ’bout the “Disney on Ice” version?

“It’ll be Olympic dancers doing extreme-sport ice dancing to pop music, in this case ‘High School Musical’ songs, and they’re ‘playing the characters’ from the show,” said the exec. ” If you loved the CD and dancing to the DVD, you’ll like it.”

Clearly this show-biz pro is most enthralled with the legit stage production, “which was actually in the works before the [TV] movie came out, then was fast-tracked for amateur and profession productions when the movie proved such a hit.”

“The challenge was to adopt it theatrically, not just throw the film script on stage,” Fickinger continued. “With commercials, the film was an hour and a half. The stage show runs two hours, plus intermission.” (Student and amateur groups also can license a 70-minute, one-act version.)

“I’d look on it as almost the expanded version of a film you can sometimes get on a DVD, with all the deleted scenes put back in,” Fickinger said. “We wanted to see more of Troy and Gabriella – who and why they are. We also wanted to shine a bigger and brighter light on the drama teacher, Ms. Darbus, because she’s the kind of passionate person who influenced all of us who created this show.”

(In the film, frankly, that character is more of a comic ditz.)

“We also reconfigured some of the music, making it truer to a Broadway show,” said the Disney dude. “In the film, it’s often used as underscoring, but on stage all the music has to come out of the actors’ mouths. When the character can’t talk anymore they sing.”

Just reading the credits, it’s obvious that the stage cast is older and more experienced than the talent seen in the movie.

“It would be terrific if we could have 25 high-school kids on stage, but the realities – school and parents – don’t allow that,” Fickinger shared. “Plus you have to be able to sing and dance and act this show eight times a week at a certain professional skill level than you can sustain at every performance. But this cast is young enough that they can still remember what it was like to be 17.”

We had other questions Steve Fickinger had to answer. Like, how do you deal with young showgoers who want to sing along with the performers?

“They’re pretty good at holding back, because they know they should. But then at the end, the curtain flies up and we go into a mega-mix. Everyone’s on their feet and gets to join in.”

And does Fickinger believe this show is fueling a resurgence in Broadway musical interest among next-generation actors and theatergoers, or is it a fluke?

“Now that they have the bug, I think it’s inevitable that kids will go to other musicals. They’re auditioning to do the show in unprecedented numbers. It’s almost like the show gives you permission. And it’s bringing entire families to the theater. Disney feels a strong responsibility to cultivate the next generation of theatergoers.”

What is “High School Musical 2” about, and will it be made available for school groups to perform?

“The sequel takes place during the summer at the country club opened by the parents of [snooty, manipulative characters] Sharpay and Ryan. So while they’re enjoying all the luxuries the club has to offer, most of the Wildcats are working there. It’s still a celebration, good times, and they get to put on a talent show, of course . . . We hope to have that show available for student productions in January.”

And will there be student life after “HSM 2”?

“We were originally thinking ‘Haunted High School Musical,’ but now there are rumblings that ‘High School Musical 3’ will be about graduation. We want to finish the stories of the characters and go out on a biggest note. So the plan is that film will start out playing in movie theaters.”