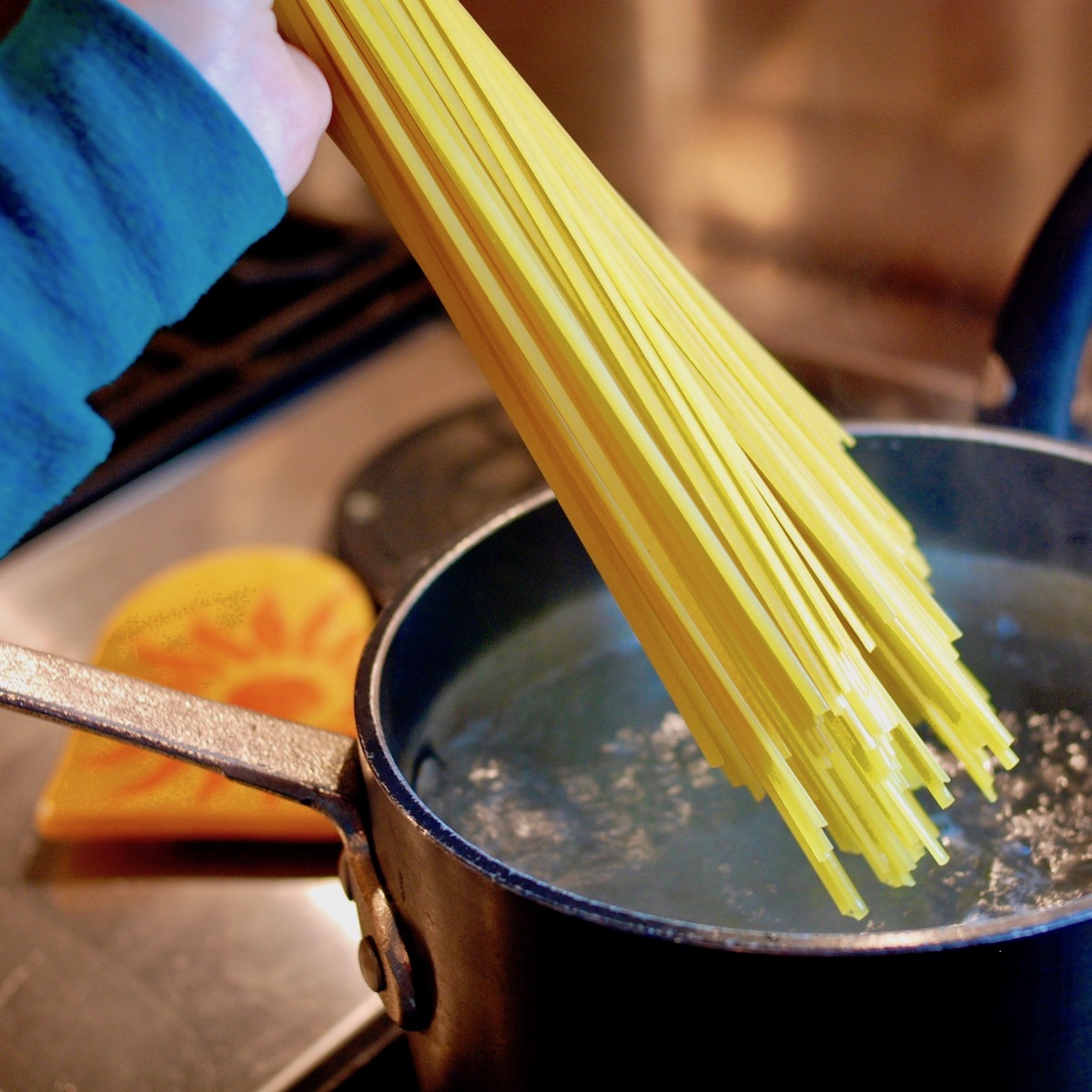 How To Cook Pasta Plus Tips for Perfect Pasta

Thanks to the great American melting pot, pasta is a staple in the United States. So let's look at how not to Cook pasta.

When “spaghetti and meatballs” turns up on children’s menus, you know what was once brought over by Italian immigrants is now as American as apple pie. I’d be willing to bet that most of you reading this have at least a box or two of dried pasta in the pantry, if not some fresh pasta in the refrigerator.

Pasta has been a staple in Italy for hundreds if not thousands of years.  The most widely accepted theory of who “invented” pasta is that Arabs brought it with them during their invasions of the Italian peninsula in the 8th century AD.  The making of both dried and fresh pastas proliferated from there, and dried pastas were especially prized for their keeping ability and nutritional content.

Contrary to what fans of low-carb diets would have you believe, pasta is not a “bad food.”  The carbohydrates in pasta are broken down slowly over time and don’t cause extreme spikes in blood sugar.  Indeed, most semolina-based pasta products are rated as having a low glycemic index.

Furthermore, pasta is relatively low in calories and fat but high in protein, complex carbohydrates for energy, fiber and B vitamins.  All that without sauce!  Add some flavorful, low-fat sauce containing a wide variety of fresh vegetables, and you’ve got a seriously nutritious dish.

While fresh and dried pasta are certainly related, they are not identical.  Most dried pastas are made from 100% semolina flour.  Semolina is ground from durum wheat, a hard wheat with a high protein content.  Enough water is mixed with the flour to create a strong dough which is then kneaded and rolled and finally cut or extruded into specific shapes.

If you look at the ingredient list on a box of dried pasta, you will see that water is not even listed as an ingredient.  The water is only there to form the dough before shaping and drying.

Fresh pasta is made from dough that often contains eggs, salt and a bit of fat as well as flour.  Fresh pasta is generally more delicate than dried and also cooks much more quickly.

While the cooking of pasta seems fairly straightforward, there are some pitfalls to watch out for.

Sometimes it can be a pain to lug out your huge pot to boil up some pasta, so you just use a small saucepan, break the noodles up and set it to boil.  You come back a few minutes later to find your pasta all gummy and stuck together.

The Fix—Use a Lot of Water

Since pasta is made of wheat flour, it contains a lot of starch.  Starch is produced by all plants and is basically the way they store food.  Humans have pantries.  Plants have starch.

Starch does not dissolve in cold water, but once water gets hot and comes to a boil, the starch granules swell up and gelatinize.  This is what makes puddings thicken.

If you are not using plenty of water to cook your pasta, you will end up making pasta pudding.  The starches will swell up and stick together, and you’ll have pasta that is all stuck together.

To keep this from happening, use at least a gallon of water per pound of pasta.  Don’t add the pasta until the water is at a full boil, and stir to keep the pasta from initially sticking together until the water returns to a boil and the agitation from the bubbles keeps the pasta moving.