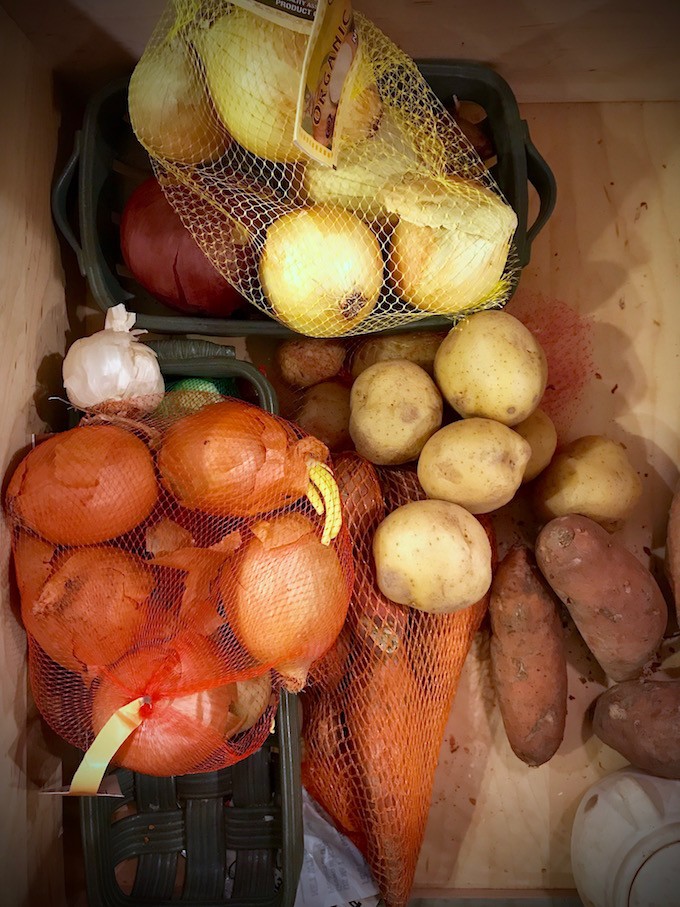 What I Learned Today About Storing Onions & Potatoes Together

What I learned from my Cuisine at Home Issue No. #127 is you should not store onions and potatoes together even though they taste so good when combined in cooking. Just think home fries.

Yes, it is true you should not store onions and potatoes together, but the reason they offer is wrong. They say that “onions, like apples, bananas, and some other fruits and vegetables, emit ethylene gas as they ripen.”

You don’t have to take my word for it. Just search “do onions emit ethylene gas” and see what you find out.

So Why Not Store Onions and Potatoes Together?

It’s best to store them separately in an area with good airflow, dry and cool air. I didn’t know this; we have been storing them together for years with no real problems.

Yes, over time, the potatoes grow those funky, curly roots from the eyes, and green shoots emanate from the onions, but that’s typically only when left too long in the onion and potato drawer.

It’s easy enough to knock off those curly things from the potatoes with your thumb, cut off the onions shoots, or better yet, use them up before the growth spurts even start.

It’s not as much of a factor in our house because our onion & potato drawer has a wire mesh front, so air constantly flows in and out of the drawer.

So, as a rule of thumb, it’s best not to store any fruits and vegetables together in closed cabinets or drawers except in the refrigerator. Still, even there, you typically store them in separate compartments.

And who stores potatoes in the fridge? Best to store them below room temperature but above refrigerator temperatures. Most cellars are cooler than the rest of the house in the summer so maybe you can find a spot down there for storage.

I have read it is acceptable to store “new” potatoes in the refrigerator but place them in a brown paper bag to absorb some of the moisture they emit.

What About Garlic or Ginger?

We store both garlic and ginger in our potato/onion drawer, so now I’m wondering about that wisdom.

It turns out garlic produces meager amounts of ethylene which is a good thing, and is not sensitive to ethylene exposure, which is even better. So I’m going to interpret that as a win for storing garlic with onions or potatoes.

Like garlic, ginger does not emit ethylene gas, nor is it sensitive to it. This means it’s a go for storing garlic and ginger with potatoes or onions.

Other Vegetables Sensitive to Ethylene Gas

Besides buying commercial products to reduce ethylene gases, the best solution to prevent ethylene gas from shortening the shelf life of your daily vegetables and saving you big bucks over time is to keep those that emit a large amount of this gas away from those sensitive to it as much as possible.

Here’s a quick chart to help you figure this out: