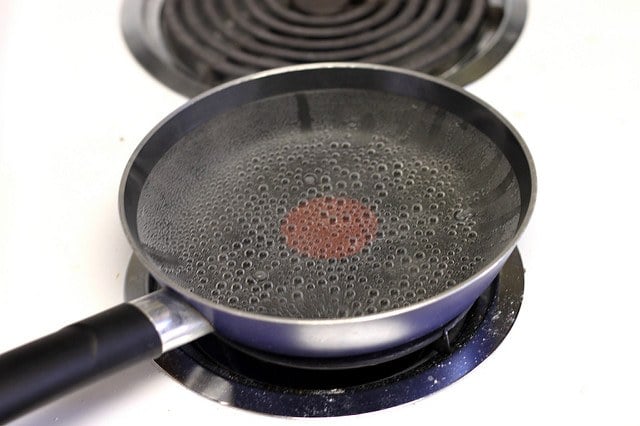 This post looks at how NOT to simmer by looking at the common mistakes home cooks make when learning how to simmer.

Braises and stews are cooked at a simmer for both of those reasons. The primary difference between poaching and simmering, aside from the temperature difference, is that the simmering liquid is generally served as a sauce for the food being simmered.

Again, rather than taking the temperature of the simmering liquid, it is best to know what signs to look for.

Steam will rise rapidly from the simmering liquid.

Small bubbles will rise from the bottom of the pan, breaking the surface.

Bubbling will not be vigorous, but will be constant.

The types of foods that lend themselves well to simmering include, but are not limited to dried beans, tough meats containing a lot of connective tissue and certain cruciferous vegetables, such as cabbage, kohlrabi, all sorts of hearty greens, Brussels sprouts and bok choy.

Since simmering is generally used to cook heartier foods than eggs and fish, there are fewer mistakes to consider.

Again, cooking in liquid is all about temperature control.  If the food is dry, it was cooked at too high a temperature.

The Fix - Take It Easy and Watch the Heat

When simmering, make sure that you keep the liquid at a simmer.  That sounds pretty simplistic, but remember what you're looking for:  a gentle bubbling.  If the bubbling is very vigorous, you know you have overshot simmer and gone right on to boiling.  Turn the burner down so you have lazily bursting bubbles.

To be more precise when simmering, don't be afraid to use the oven.  Bring your cooking liquid just to a boil on the stove, and then put it in a 210°F (99°C) to let it simmer away until done.

Especially when simmering tough meats, be certain to allow the meat to cool in the cooking liquid.  That way, the muscle fibers can gradually reabsorb the liquid.  If you cool the meat separately from the liquid, the meat will dry out as it cools.

Mistake #2 My Sauce is Kind of Watery

To maintain a constant level of liquid during simmering, it is best to cover the cooking pot to prevent evaporation. Evaporation concentrates flavors, though, which is necessary to produce a really savory sauce.

The Fix--Take the Lid Off

Once the target food is as tender/done as you would like it, remove it as well as any other solids from the cooking liquid and set aside.  Turn the heat up and allow the remaining liquid to boil gently until the flavors have concentrated to your liking.  This should only take a few minutes.

Once you are happy with the flavor of your sauce, turn down the heat and return the solids to the pan to reheat to serving temperature.