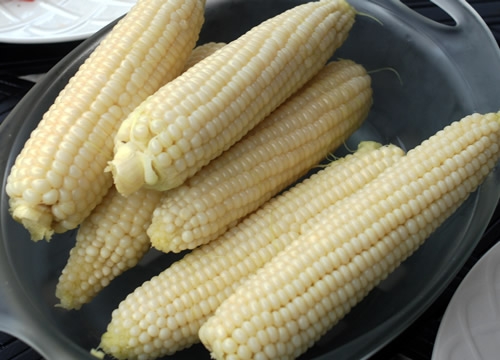 "I love fresh New Jersey Corn!" I'm on vacation in South Jersey and getting my fill of corn at every meal. I've even recreated the Corn Risotto recipe I wrote about on my blog. Mostly we have been eating it on the cob with salt & pepper and butter. We even have this new (to us) tool called the Butter Girl to spread butter on the corn.

The Butter Girl has a companion Butter Boy so no one feels left out. The design is simple as you can see by the photo. You insert a stick of butter into the base and spread the butter from the top. A great tool for those who don't appreciate rolling the corn on a stick of butter giving it that unique concave appearance.

What Makes Jersey Corn So Sweet?

It starts with the hybrid, silver queen, with its rows of small, tight, milky white kernels. Silver queen corn loves New Jersey's clay soil, which is fertile and well drained. When ready to pick, the corn is about 10 inches long and the kernels are full. The silk is just starting to brown.

When I went to a local farmers market to pick up some corn and local tomatoes, I asked when the corn really starts getting good and how long it will last. I was told the beginning of July is when you want to start eating it and it should stay good right up to the end of the season.

The reason the corn is so sweet is because the Silver Queen hybrid was developed to slow down the conversion of sugar to starch during the growing season so the sugar turns into starch after it is harvested.

How to Cook Fresh Jersey Corn

There are lots of ways to cook fresh corn. You can grill it, steam it, cut it off the cob and saute it or my favorite way is just plain old boiling it. We husk (remove the outer leaves and silk) fresh Jersey corn and put it into a big pot of cold water. Heat the water and when it comes to a boil it's done.

Serve it up with butter, salt and pepper and you have one of the greatest summer side dishes I've ever tasted.  This with some fresh, local Jersey tomatoes and a pot of steam clams and you have my favorite Jersey shore summer meal.