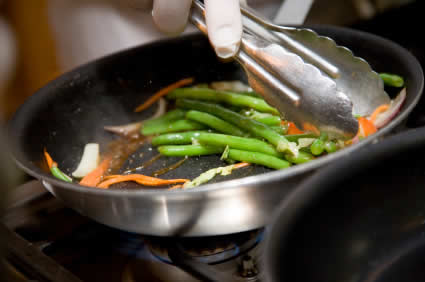 Most people think there are two types of culinary school: baking schools and culinary institutes. In the former, students learn how to bake and make desserts; in the latter, students focus more on cooking meals and running a restaurant.

However, in today's culinary education field, there are more options than ever before. If you want to specialize in classic French cuisine, you may want to attend Le Cordon Bleu. If you want to work with Italian cuisine, you can travel to Tuscany and take a course on everything from sauces to pasta. And if you want to combine your personal beliefs in vegetarian or Kosher cooking, there are now schools and programs that cater specifically to you.

What About Vegetarian and Kosher Culinary Schools?

Most vegetarian and Kosher schools focus on traditional techniques in preparing foods. In vegetarian cuisine, the emphasis is often on using organic foods, raw and whole foods preparation, and nutrition. As a field, it has a good future, since healthy eating and vegetarian options are growing in popularity.

While most comprehensive culinary arts schools do offer vegetarian training, a few schools that specialize in it include:

In Kosher cooking, the focus is on preparing foods that conform to the rules of kashrut, the Jewish dietary laws. As with vegetarian culinary school, Kosher culinary training most often occurs as part of a larger culinary school course.

However, there are several notable schools in Israel as well as one of the only United States schools, the Center for Kosher Culinary Arts in New York, that you can attend for specialized training.

It doesn't matter whether you're seeking a culinary specialization because you're trying to carve out a culinary niche or because you want to start a culinary career that aligns with your own dietary habits and views.

Thanks to the versatility of the culinary school market, you can get the training you need to work with all types of foods: vegetable, mineral, or anything in between.