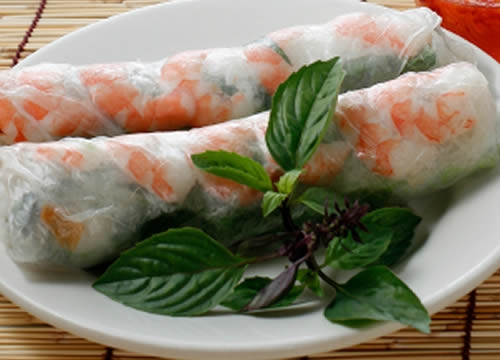 OK, now that everybody has rolled in, let's get started.  The ultimate topic of this article is summer rolls.  But to do justice to that endeavor, one should understand the often bewildering context of Asian rolls in general.  My plan was to elucidate the culinary differences and history of these rolls, but that's where the confusion began.

In preparation for this article I spent a couple days reviewing a variety of cookbooks, reference books, and websites, all American in origin.  I was on a roll, but hadn't arrived at a consensus as I encountered much disparate information.  I realized I had to go to the horse's mouth.

I began by querying my wife and her friends, all of whom grew up in China, about their egg/spring roll experiences.  Next I consulted with a Chinese couple who had owned a number of Chinese restaurants in New York City.

Finally I conferred with my old colleague, Chef Joseph Poon of Philadelphia.  Chef Poon is a Philadelphia icon, having spent many years operating restaurants, teaching cooking classes, and organizing tours of Philly's Chinatown.  I had the honor of teaching a cooking class with him years ago.  Not unexpectedly, all of the authentic sources were in agreement.

Spring rolls are indigenous to China, with neighboring countries sporting their own versions.  Egg rolls are an American invention, albeit by Chinese immigrants during the 19th century.

Spring rolls were traditionally eaten during the Chinese New Year celebration or Spring Festival, hence the name.  During my preliminary search, I perused a number of sources asserting that both rolls originated in China, or that the egg roll was Chinese and the spring roll was the Americanized counterpart.

But my Chinese cohort was unanimous that the spring roll was of Chinese provenance.  Moreover, none of them ever had an egg roll in their country of origin.

Egg rolls start with wheat flour mixed with water or sometimes egg.  Spring rolls can utilize a wheat flour based wrapper or rice paper wrappers, (made from rice flour).  Egg roll wrappers are thicker and egg rolls are larger.

Egg rolls are also always fried.  Spring rolls can be eaten fried or fresh although the fresh version is more common to Vietnam which we'll get to shortly.

The fillings for egg and spring rolls vary greatly from country to country and from chef to chef.  Even the different sub regions of China have their own traditional mixtures.

Nevertheless, egg rolls are usually based on vegetable fillings, (cabbage being the quintessential ingredient), while spring rolls run the gamut of pork, seafood, vegetables, or some combination thereof.

Vietnamese spring rolls can be fried or fresh.  They frequently contain pork, bean sprouts, rice or mung bean noodles, and other ingredients characteristic of Southeast Asia.  Vietnamese fish sauce is often used as a component for the dipping sauces served with them.

Summer rolls are a type of Vietnamese spring roll.  They are made from rice paper wrappers and are not fried.  They are served cold and as the name implies, are a warm weather favorite.  While the fillings can still be diverse, they tend toward the vegetable realm and often contain thin rice or mung bean noodles.

Rice paper wrappers can be found in the Asian section of general supermarkets and without question in Asian grocery stores.  They are thin, round, semi-translucent, and approximately eight inches across.

Working with them can be a little tricky.  To render them pliable they must be briefly soaked in warm water and drained on a clean towel.  They are delicate and must be handled with care as they have a nasty tendency to tear or fold up on themselves.

How to Prepare a Summer Roll

Start with a round dish, such as a pie plate, large enough to hold the wrappers.  Fill it with warm water.  Have all of the ingredients for the filling ready to go.

Place a wrapper in the water and keep your fingers in contact with it.  You can feel when the wrapper begins to become pliable.  This takes around 15 seconds but I rely on touch and not the clock.

Insufficient soaking and the wrapper will remain somewhat brittle and crack.  Too much and it becomes mushy and tears.  After a few practice ones you'll be able to sense just the right point with your fingers.

Carefully remove the wrapper from the water and lay it flat on a clean towel to dry and become sticky.  Using two hands, transfer the wrapper to a plastic cutting board.  They'll adhere better to plastic which you can use to your benefit to tighten the roll.  More on that in a moment.

With the wrapper on the board add the fillings toward the bottom third of the wrapper.  Do not overfill and do not line the fillings all the way to the edges.  Save an inch or so at each end.

Holding the filling tightly with your first four fingers, use your thumbs to flip over the bottom creating the first turn.  Fold over the sides of the wrapper where you left an inch space to close the ends and then proceed to roll the remainder.

The top of the wrapper will stick somewhat to the board.  As you roll you can tug it somewhat, using it's adherence to make the roll tighter. 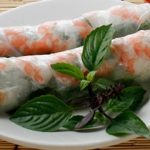 For the Dipping Sauce

« As Good As It Gets At Osteria
Finding The Perfect Steak »