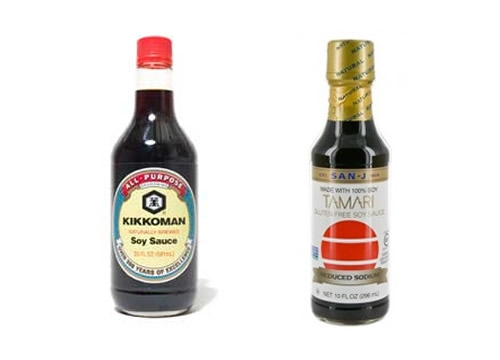 Do You Know The Difference Between Tamari Sauce and Soy Sauce?

I admit that I've never really given this much thought, but to my untrained eyes at least, soy sauce and tamari look pretty much alike. So there must be some reason that both are available. So I did some digging, and this is what I found out.

It is no wonder that both sauces look so similar.  Soy sauce and tamari are both sauces made by fermenting usually some combination of wheat and soy. Technically they are both soy sauces as they contain soy. But while soy sauce always contains wheat, tamari contains less wheat, if any, which makes it a good alternative for people with a gluten intolerance. Since not all tamari is gluten free, it is best to check the label to be safe.

Where Do They Come From?

Soy sauce originated in China and then spread throughout Asia. Tamari is one specific type of Japanese soy sauce. So if you see a bottle that says something like Tamari Soy Sauce on the label, you'll know that it is Japanese.

How Are They Made?

One interesting thing I discovered is that, while soy sauce is "brewed" or fermented as a specific product, tamari is actually a by product of miso production. Miso ages into a thick paste while the tamari is the liquid that gathers in the vat as miso ages or matures, sort of in the same way that whey runs off cheese as it is pressed. The word tamari is actually loosely translated as "puddle" since it puddles up during miso production!

Tamari is a bit thicker and darker in color than its Chinese counterpart. Flavorwise, it is smoother and less salty than soy sauce. I sometimes find Chinese soy sauce to be a bit harsh while tamari is mellower and lends a more complex flavor to dishes than soy sauce.

When To Use Each

Since tamari is more complex and mellow than regular soy sauce, I think that it is a better option for dipping and/or mixing with wasabi as an accompaniment to sushi. Still, most sushi places that I've been to offer soy sauce on the table, even though sushi is Japanese. I'm really not sure why this is as, since a quick price search shows the two to be comparably priced. Perhaps it is because most Americans are more familiar with Chinese-style soy sauce rather than its Japanese cousin.

Whatever the reason, most sushi restaurants will have tamari as well. You just have to know to ask for it.  And as I find myself eaten less gluten too, I will do the same.

But what about cooking?

Which bottle should you pick up to add to your stir fry?

I look at it the same way I look at my olive oil. If I have a very fruity and rich extra virgin olive oil, I am not going to use it as a frying oil since the complexity will just be lost when it is heated. I save my less-flavorful oils (and oils with a higher smoke point) for frying.

So, when the sauce is going to be the star of the show, as for a dipping sauce for sushi or a quick and easy sauce for noodles, I'd choose tamari. When you just need to add some salty flavor to a stir fry, reach for the bottle of soy sauce.

So, do you need to own both Japanese and Chinese soy sauce? Unless you are gluten-intolerant and must use gluten free tamari, I leave that choice up to you. At least now you know the difference between the two. And don't forget to ask for tamari the next time you go out for sushi!