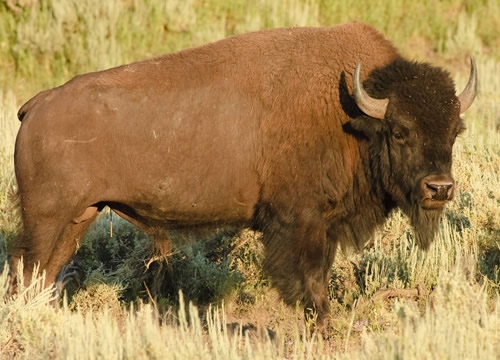 Did you know that buffalo meat is actually good for you?

I sure didn't know much about it until I spoke with Dan Marino of Jackson Hole Buffalo Meat Co. I had the opportunity to pick his brain about buffalo meat, how it compares to beef and ask about taste. I think you will find his responses both surprising and interesting.

I'm calling buffalo the "real American meat" because it was the primary meat source to many of the Plains Indians until millions of the buffalo were slaughtered back in the late 1800's and they nearly became extinct. Now they are being farm raised on private ranches and the numbers are back up to about one-quarter of a million.

Why Buffalo Over Beef?

According to Dan Marino, buffalo meat tastes better than beef. He says the flavor is similar but buffalo has a "lighter, sweeter flavor" and "doesn't leave a greasy feel in your mouth. " He also reveals buffalo has a "much livelier flavor" but isn't "gamy"

Sounds good to me but I can't vouch for this because I've never had a buffalo filet mignon so I am making it my goal to try them side by side and see what my taste buds decide.

Another interesting fact he makes about buffalo is the health benefits that come with it. Not only does it have 70% to 90% less fat compared to beef, on average it has 50% less cholesterol. And on top of that, it is higher in protein, iron and all the omega and amino acids. Wow, my doctor may be prescribing buffalo pretty soon.

And did you know that because they are naturally resistant to disease and grow faster than domestic animals, they don't need all the antibiotics and growth hormones that are typically given to beef cattle?

So what do they feed a buffalo?

Buffalo are raised on open grassland and graze on natural grass. Because they are not fed manufactured feed, there is no current concern about mad cow disease at this time. I was also told that unlike sheep and beef, they don't defecate in their own water source. Now what's wrong with those sheep and cows?

What about inspections and grading?

Just like beef, Dan's buffalo are inspected by both the USDA and the State Department. At this time, there is no official grading system but the National Bison Association is working on it.

As I mentioned above, Dan thinks buffalo has more flavor. Since a buffalo and cow have the same muscle groups, their texture and tenderness are very similar to each other. He says, "A filet on a buffalo is every bit as tender as on beef. The main difference is the darker color and sweet flavor."

Are there similar cuts available?

Because of the similar muscle groups, buffalo has the same cuts as beef. There are rib eyes, rib steaks, sirloin, t-bone, porterhouse, strip, filet, brisket, flank, roasts, filets, burgers and the rest of the cuts

How to you cook buffalo meat?

You cook it the same way you cook beef but because of its lower fat content, it will cook faster than beef. You see the fat works as an insulator and slows down the cooking time. The less fat, the faster the meat will cook. So you can grill it, roast it or pan-fry it. Just be careful not to overcook it.

Where can you buy buffalo meat and why is it so expensive?

I've seen buffalo burgers at several supermarkets but nothing in the more expensive cuts. Some grocery stores let you special order it but it takes time and it is very expensive. Your other option is to order it online at places like Jackson Hole Buffalo Meat Co.

The reason for the high cost is basic economics 101, "supply and demand." Right now there is high demand and very limited supply and most of the supply is going to restaurants. Did you know that there are more beef slaughtered in the United States EACH day than buffalo in an ENTIRE year?

Dan tells me you can purchase buffalo meat either fresh or frozen. They vacuum pack their buffalo product to give it a longer shelf life. By removing the oxygen from contacting the meat, it will not freezer burn on you. He says the vacuum packed product has a freezer shelf life of about a year. They normally ship it frozen but can ship it fresh if that is important to you.

When I asked Dan what is the one message he would like my readers to get about buffalo, he said, "Buffalo is the healthiest choice anyone can make regarding their meat eating end of their diet. If you are on a restricted diet, it is a red meat you can enjoy and feel good about it because it will not cause the same problems as beef, pork, or any other domestic animal. .. The flavor is fantastic too. Buffalo, it's what America was meant to eat!"

If you have any questions, I'm sure you will find the answers at Jackson Hole Buffalo Meat Co. and if you don't, I'm sure Dan would be happy to answer them for you. You can contact him at his web site.