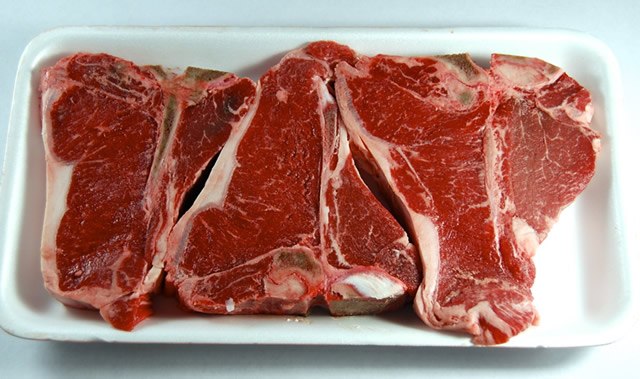 Color - If you go to a store that sells both grass-fed beef and meat from cows fed grain and finished on corn, you'll notice a huge difference in color. The grass fed beef is going to be a much darker red color than a well-marbled grain finished steak. Go to a Whole Foods or Wegmans and look at the grass fed and grain fed steaks side by side and you'll notice a huge difference.

I learned in Jimmy’s book “Freshly cut meat has a nice bright appearance or “bloom” when first cut and packaged. When the freshly cut surface is exposed to oxygen, the myoglobin in the meat makes red meat turn a bright red color.”

Unwrapped beef in the case will oxidize at a faster rate and will turn from bright red to brownish red as the day goes on. That doesn't make it bad. I know a local butcher from a high-end meat market who explained to me he can't sell steaks at the end of the day if they’ve turned brownish red.

In his opinion, these are as good as the cherry red steaks put in the case earlier in the day and maybe better because they have a little aging. He would sell them to his favorite customers at a lower price and the rest would end up in ground beef.

The marbling on grain-fed beef should be white or creamy. I was surprised when I first saw the color of fat (marbling) in grass-fed beef. It was sort of yellow. There should be no brown spot in the fat or on the edges.

Smell - If the meat you are buying smells sour or has an ammonia odor, it’s not fresh. Don’t Buy It!

Fresh steaks should have a slightly meaty smell but never stale or off smelling. It’s impossible to tell how a pre-packaged steak smells but if you take it home and it doesn’t smell right, bring it back immediately to where you purchased it and let them know. You are doing them a favor because they don’t want to be selling bad meat.

Touch – this one is difficult until you get the beef home. You can’t touch a pre-wrapped piece of meat and most butchers aren’t going to let you put your hands all over their steaks. However, if when you get your steaks at home, they feel sticky to the touch, there’s a good chance they are past their prime and should be returned to the store.