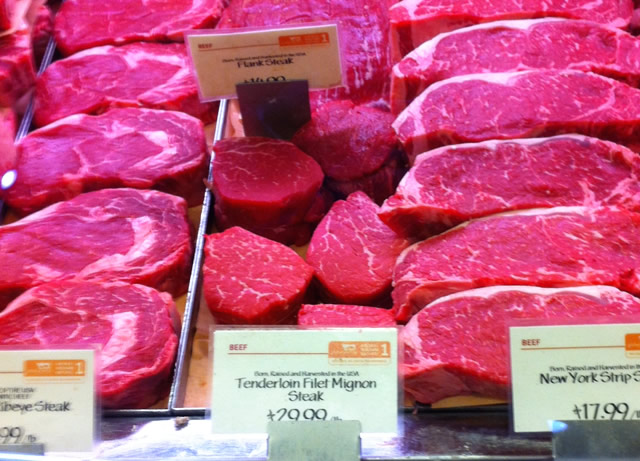 Where Do the Various Beef Cuts Come From On A Cow?

How to Butcher a Cow in Just One Hour

I have to admit I'm a little obsessed about where different cuts of steaks and roasts come from on a cow. I want to know the exact location of a rib eye compared to the filet Mignon. Doesn't everyone? These two beef cut videos will show you everything you'll want to know.

Most of us know the chuck is at the front of the cow, the rump is at the rear and the loin is in the middle but what about the all the other sections like the short loin, sirloin, bottom sirloin plate and brisket.

There are names like clod, square cut chuck, plate and then there are names for different steaks: Flat Iron Steak, Delmonico, Top Blade Steak and Skirt Steak to name a few but where exactly are they located on the cow?

For years I've been asking my butcher(s) to show me on charts or on actual large cuts of meat where various cuts attach to each other so I have a better understanding of how meat is fabricated.

To make things even more confusing, butchers have recently discovered new cuts of tender beef from parts of the cow that were always considered too tough to grill or pan fry and had to be slow cooked to become tender. For example, the Flat Iron Steak is full of flavor and very tender but it comes from the chuck which is the front shoulder locomotion muscle.

I found this video created by the UK College of Agriculture, Food, and Environment. It is the best video I've seen on how a butcher fabricates a side of beef while describing the various types of cuts. The butcher, Dr. Gregg Rentfrow, gives an easy to understand explanation of how beef is fabricated while showing you where each of your favorite cuts come from.

The video is about 1 hour long but you don't have to watch the whole clip in one sitting like I did three times. Dr. Rentfrow starts with the top half of the cow, works his way to the back half and finishes in the loin and short loin sections.

You may be as surprised as I was after watching this video is how much meat goes for chop meat and how few high cut steaks there actually are in a whole cow.

Anyway, if you are interested in where your beef steaks and roasts are coming from, I think you'll enjoy this video. You can follow along on the beef chart above or check out one of many beef charts at my Pinterest Beef Charts. 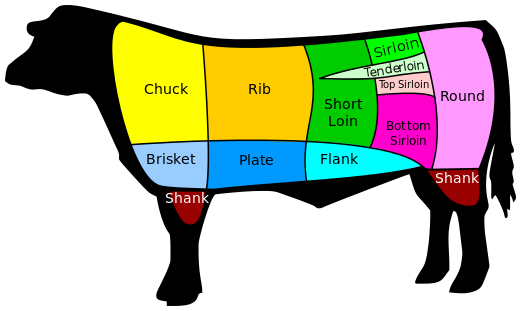 Beef Cuts Mentioned In This Video

There are so many great cuts of beef I never heard of before but look for now when I'm out shopping for beef. If I can't find it in the market, I ask the butcher if it is available and can he either cut some for me or order it for a future date.

What I've done below is posted the cut, what section it comes from and where on the timeline of the video you can find it.

All cows have 13 ribs. When they fabricate the carcus for primals and subprimals, they "break" it in half between the 12th and 13 rib (ribbing) to end up with a fore quarter and hind quarter.

Starting with Fore Quarter, it is broken down between the 5th and 6th ribs to yield the "ribeye & plate" and the "squarecut chuck".  The first muscle removed from the ribeye & plate section is the diaphragm muscle also called a hanger steak and is very popular in Mexican fajitas.

The ribeye is cut from the plate at approximately 3 inches from the ribeye muscle (7:21 minutes).  The plate meat is used for "chop" or bone-in shortribs

I just found this new amazing video with Jason Yang, a butcher at Fleisher Craft butchery, breaking down half a steer to show where the various cuts of meat come from. Most of the cuts you may be familiar with, but there are some less expensive cuts Jason will introduce you to that you are going to want to see.

This video comes from Bon Appetit and is one of the best I've found on the Internet.