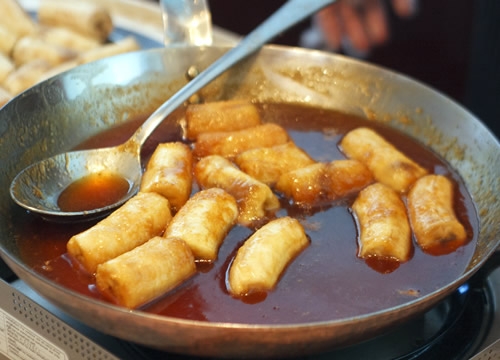 I wanted to share with you my adaptation of a Bananas Foster recipe because it was much easier to make than I thought it would be and maybe you’re looking for something to serve at one of your holiday dinners.

The ingredients are simple to prep and the cooking technique is easy (except you have to be extra careful when you flambé at the end!).

The Williams-Sonoma cookbook gives the story of how Bananas Foster was created at the famous Brennan’s restaurant back in 1951 for a magazine article and describes the procedure for preparing and flaming but they don’t provide ingredient amounts. Here is how my wife and I prepared it.

I always advise to remove a hot pan from the flame when adding any kind of alcohol just to be careful. It takes a bit for the rum to get hot enough to flame but you never know. Return the pan to the stove; cook until the rum is hot, about two minutes.

The official method to “flame” the bananas is to tip the pan slightly and ignite the rum. When I tried this nothing happened. It may be I didn’t let the rum get hot enough or I was just being a little timid.

So I ended up using one of those long nosed fire starters and had no problem igniting the rum to flame the bananas.

Please be careful whenever you are cooking with alcohol and although I don’t think you will need one for this recipe, it makes sense to always have a small fire extinguisher in the kitchen just in case you ignite more than the bananas.

The flames burn off most of the alcohol in the rum and leave a wonderful flavor. 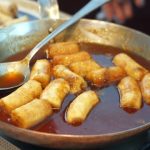